Dec 16, 2018 2:10 AM #
rockman:
all you ever wanted to know about native cherry trees in Australia - with a significant orienteering reference too:
https://theconversation.com/native-cherries-are-a-...

Its distinctive shape led to native cherry being marked on early Australian orienteering maps, since they are in a cartographic Goldilocks zone: obvious, just numerous enough to make them useful, but not so many as to clutter the map.

That was until Australia held the World Orienteering Championships in the mid-1980s, when the standardisation of Australian orienteering maps for overseas competitors led to the cherry ballart becoming an early victim of internationalisation – at least cartographically speaking.
Advertisement
Dec 16, 2018 5:18 AM #
jennycas:
Made my day :)
Have you ever eaten the fruit? Quite tasty, but takes a while to pick enough for Christmas dinner!
Dec 16, 2018 5:19 AM #
gruver:
I don't miss the demise of the cherry tree on orienteering maps, but I do appreciate the concept of a cartographic Goldilocks zone. On some maps round here, the small depression could be considered for similar treatment. On others, the boulder.
Dec 16, 2018 7:38 AM #
Shingo:
Native cherries are still mapped as a distinct feature on BF's Falnash map with a green circle.
Dec 16, 2018 8:07 AM #
blairtrewin:
The one appearance I recall them making post-1985 was on the 1997 Australian Championships map, Burra Creek (the Canberra one).
Dec 16, 2018 9:24 AM #
slow-twitch:
I'm sure they featured on at least one of the maps for the Canberra Oceania champs in..um...same year as Australia hosted JWOC? I was probably the only foreigner who found them useful as an uncommon feature that stood out in the forest - I guess the non-ecologists struggle to see the trees for the woods...
Dec 17, 2018 3:07 AM #
EricW:
Thank you rockman!
I've been waiting 33(?) years for this.

In 1985 I was waiting to see this special feature which I'd seen on previously distributed Aussie maps.
I got introduced on one of the "non standard" training maps, and took me all of about 2 seconds to "get it".
Even for a first time foreigner, I thought this feature clearly belonged on an O map, and the "Goldilocks zone" rational is just a bonus. These cherry trees are a perfectly obvious and useful feature, invisible only to Scandinavian-centric, self important, do-gooders. (Sorry, I probably offended some friends)
International orienteers, even average tourist level, don't need to have "dumbed down" culturally-neutral maps.

Termite mounds, anthills, palmetto, and mountain laurel might be analogous, but the boulder and small depression issues are a different animal, involving minimum size criteria and map clutter, not supposed cultural bias.

PS. After looking through my maps from APOC in Tasmania in 1988 I couldn´t find any control with a native cherry tree in the description. There were quite a few on the map though and some very close to what I had for a control. Funny how memory can play tricks on you...
Dec 17, 2018 1:48 PM #
blairtrewin:
I’ve run on plenty of maps in Central Europe with distinctive trees whose only apparent distinctive feature was the orange and white flag at the base ( and that’s before we get into charcoal burning grounds...)
Dec 17, 2018 1:51 PM #
bubo:
Distinctive trees in Central Europe also came to mind when I read about the native cherry trees. Locals told me to look up - really high, that is - since that´s where the difference was.
Dec 17, 2018 11:52 PM #
jjcote:
Charcoal burning grounds, and sometimes boundary markers.

(Unlike charcoal burning grounds in Pennsylvania, which are very distinct.)
Dec 17, 2018 11:59 PM #
EricW:
My advocacy for the native cherry is based on my experience somewhere in the Bendigo- Ballarat vicinity, which apparently coincides with rockman's experience, with good specimens, in good visibility conditions, contrasting with the surrounding forest.
In the common gully-spur terrain context, they struck me as one of the few significant point features, with the visual impact comparable to a medium boulder.

If there is any doubt, I certainly don't advocate mapping them in all conditions and contexts, and I certainly don't want to endorse every mapper's idea of a distinctive tree. The other reported experiences are believable.

Any feature that is referenced by "look up high" should be viewed as as self-eliminating since this is outside the normal perspective of an orienteer. The emphasis on the orienteer's viewshed is an important principle for defining distinctive trees (low canopy), but also other features such as vegetation boundaries and clearing-related features. Don't look for this in the ISOM ;-)
Dec 18, 2018 12:21 AM #
EricW:
I appreciate JJ's endorsement of our charcoal burning grounds/terraces.
I was avoiding this tempting diversion, but I believe it is a good analogy, to make the point of simply using honest eyes in the terrain, rather than a rulebook or official's decree. I've seen and mapped thousands(?) of these, but the ones I've apparently been over in Norway and Sweden were baffling.
Dec 18, 2018 5:13 PM #
EricW:
...and oh yeah, the first guy to discover/map our charcoal terraces, was a foreigner, a Brit (bloody Pom no less), Steve Templeton, whose honest eyes have stood the test of time.
Dec 19, 2018 1:59 AM #
gruver:
Eric has given us another useful term: "the orienteer's viewshed" or normal perspective of an orienteer. With that perspective, a cherry tree (or a eucalypt, or a pine tree) may or may not be a "417 Prominent large tree" according to its prominence. Perhaps they got a bad rap in 1985 because too many were mapped for their cherry-ness rather than their prominence. The baby went out with the bathwater.
Dec 19, 2018 2:17 AM #
LOST_Richard:
In Western Australia we used to map snottygobble trees, I had to find one at John Forrest National Park on my first event in Australia, it took a while!

https://en.wikipedia.org/wiki/Persoonia_longifolia
Dec 21, 2018 12:26 AM #
gruver:
Maybe the drop bears chewed them all up.
Dec 21, 2018 5:53 AM #
TheInvisibleLog:
Not always in the cartographic golden zone. This is an excerpt from my first attempt at mapping back in the days of OCAD 5 (1990s?). I never mapped them again. The placement was all by triangulation and i ended up hanging different coloured streamers from trees to keep track of what was what. I doubt any has ever been used as a control site. The trees were removed from the map long ago. 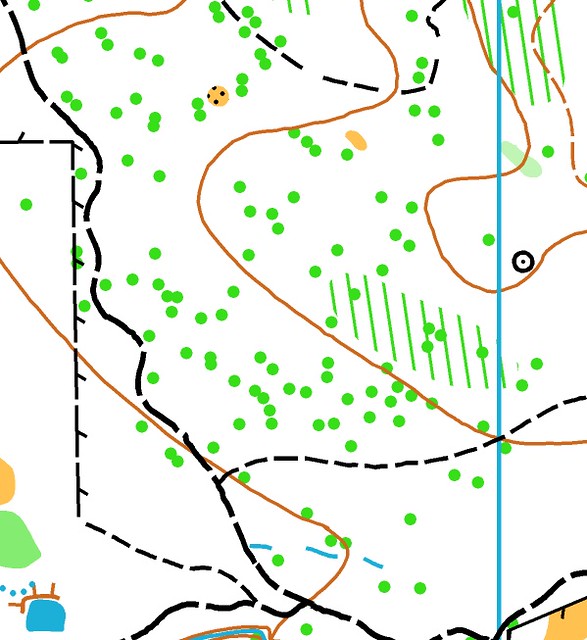 Dec 21, 2018 12:36 PM #
jjcote:
It's all a matter of context. We have places near where I live, where we don't map boulders, because there are too many. Well, we do map the very large boulders, at least the ones that would be considered very large in other places. But just because it's as tall as I am doesn't mean it's big enough for the map. We definitely don't map boulders that are less than knee high (on some maps), but in other parts of this country, they definitely do.
Dec 22, 2018 2:15 AM #
EricW:
Yes, context, a fundamental for selection of detail. Is that word or concept in the ISOM?
Dec 22, 2018 5:13 PM #
tRicky:
I'm sure I've run on a NSW map within the past five years that had cherry trees mapped.
Dec 23, 2018 1:23 AM #
tinytoes:
NCN maps them!!! maybe on one of the Christmas 5 day maps from 2 years ago?