Feb 2, 2019 4:41 PM #
jjcote:
I was never really fond of corn flakes, although there were always some in the house. Maybe my mother ate them. There were also Wheaties, which were maybe there for my father. At some point I tried them and decided I could stand them. I often eat them to this day, no kidding, there's nearly always a box in my cabinet. But then for dessert I usually have something like Cap'n Crunch or Lucky Charms.
Advertisement
Feb 2, 2019 6:32 PM #
Swampfox:
Many people will agree there is nothing wrong with Wheaties, especially since it rhymes with treaties. Many are also fond of treaties, though not so much the (current) Administration, which seems to view treaties--especially older ones that they did not make--with some considerable distaste. Perhaps if they tried them with a bit of sugar and milk in a bowl they would have a change of heart, if they had a heart in the first place.
Feb 3, 2019 2:31 PM #
chitownclark:
Nothing wrong with Wheaties? Check out the ingredients.

Trisodium Phosphate? Otherwise known as TSP, and banned for sale in Chicago. I used to clean the grease off my driveway with the stuff.

BHT? ...BHT or butyl hydroxytoluene is a fat soluble synthetic compound which is commonly used to preserve foods. As such, it is primarily used to prevent fats in foods from becoming rancid – but it is also used in cosmetics, pharmaceuticals, jet fuels, rubber, petroleum products, electrical transformer oil, and embalming fluid....

I buy organic grains at Whole Foods and boil them up together: Whole wheat, rye, rice, quinoa, spelt berries. Store it in the refrigerator, and take a couple tablespoons every morning, microwave the gruel with rolled oats, bran, Wheatina...add raisins and milk. Yum! Hot and uncontaminated. No TSP, no BHT, no preservatives, no added sodium, and none of that other stuff.
Feb 3, 2019 8:47 PM #
jjcote:
I must have a defective box of Wheaties, because the ones I have here don't list any of the ingredients in that link beyond the corn syrup.
Feb 3, 2019 9:57 PM #
Swampfox:
I have problems deciphering and making sense of some of the extraordinary ingredient lists many food things are made of, and said lists are usually in very small type and often stretch across multiple sides of the packaging, if they appear at all. It is not clear that they in all cases adhere to 1:15000 IOF ingredient list norms, though who knows. We may need a ruling.

So, in response, keep it simple. The only things I ever eat are bananas--which are made from banana, a familiar and very healthful substance--and soda crackers--which are made from cracker and soda, with soda being a familiar and generally thought of as an unhealthful substance. The combination of the healthful and unhealthful gives me the balanced diet which all nutritionists urge us to strive for. Yum! I may have a soda cracker right now! I usually listen to the Grateful Dead when I munch soda crackers, which adds even more to the already high nutritional content.
Feb 3, 2019 10:03 PM #
bubo:
The combination of the healthful and unhealthful may even be of importance when listening to music. I´d say that grateful and dead may be a prime example of that balance in "diet".
Feb 4, 2019 4:18 AM #
Swampfox:
To bubo, I give you: http://omaps.worldofo.com/?id=118215

You are, if nothing else, a fine looking terrain. Some may wonder if you get depressed now and again, but as for me, when I see relief like this, I feel fine.
Feb 4, 2019 12:22 PM #
jjcote:
So, Mr. Cowboy, in your particular regional dialect, what would be the general term for sweetened non-alcoholic fizzy drinks? (My parents would have said "tonic".)

Last week, in my travels, it occurred to me that the southern parts of the Chilean mainland, say, between Punta Arenas and Torres del Paine, is the sort of terrain where a Wyoming cowboy would feel right at home. Particularly with regard to the wind, which he might find surprisingly strong.
Feb 4, 2019 4:55 PM #
Swampfox:
Soft drinks for the soft hearted and meeker types. Whiskey for the tougher sorts who eat barbed wire for breakfast and wrestle grizzlies for dinner in the evening. Red is the color of the cardinal, and name even three things that top the Belichick, if it's at all possible.
Feb 5, 2019 12:28 AM #
jjcote:
At the supermarket today I checked, and Lucky Charms had TSP, while Cap'n Crunch had BHT.
Feb 7, 2019 6:03 PM #
cmpbllv:
BHT makes me hyperactive. Or at least it did when I was a kid - I haven't been allowed near it, since.
Feb 7, 2019 6:12 PM #
jjcote:
You sure it wasn't just the crunchberries? They're loaded with energy!
Feb 7, 2019 7:23 PM #
Swampfox:
Cmpbllv, I am authorizing you full permissions to get near BHT, and even crunchberries, which besides being loaded with energy as JJ notes, are also loaded with crunch and berry and delightfulness! Why gu when you can crunchberry?
Feb 7, 2019 7:53 PM #
jjcote:
Sometimes they even sell boxes of "All Berries", which leaves out the square cereal parts and is just like it sounds. 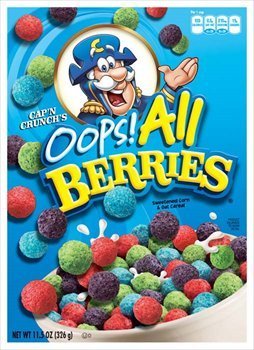 When it comes to the undeniably important breakfast berries, cmorse's depth of knowledge exceeds that of the infamous IBM supercomputer Deep Berry, and that's good enough for me.
Feb 8, 2019 7:17 PM #
jjcote:
What's that red thing in the lower left?
Feb 8, 2019 9:24 PM #
chitownclark:
It's imperfect produce...a new politically-correct way of getting your roughage!