the real treat was finding out rogue control 61, misplaced at about 140 meters southeast from control 58. Loved it. We-want-more-misplaced-controls... pic.twitter.com/cYzaMYma8L

For the record, some people detest them, particularly in rogaines. :-)

May 21, 2019 2:08 PM #
Mr Wonderful:
Sherpes, if had known you liked misplaced controls, I would have invited you out for our belated April Fool's course. Three misplaced, three with wrong or no clues or wrong numbers, and three with other shenanigans (extra flags, tiny flag, or no SI). It was an interesting puzzle to see what mistakes one could intentionally make that would be fair and fun. One day I'll figure out how to have an entirely missing flag be fair and fun, but this venue I don't think was it.
May 21, 2019 2:51 PM #
sherpes:
GEOCACHING: cache gets muggled and repositioned in an unknown location nearby (05/01/2006). Automatically becomes a cache of unknown difficulty (05/13/2006). The following weeks, several teams / squads of geocachers converged and combed the territory, and it was ultimately found. Ten years later, they are still talking about it, as one of the greatest finds.

HASHING: locals find the beer mark and the beer, and move it to a different location nearby. The hashers fan out and search for it, then a call out from the deep woods, and they all converge. The beer was there, but the cans were almost all punctured. 'Em half minds sucked the beer leaking out in sprouts.

ORIENTEERING: in a 6-hour rogaining-style event at Coopers Rock State Forest near Morgantown, West Virginia, the control flag was supposed to be at the trail head near next to the parking lot. Wasn't there. Experience tells you to sniff around, and you find it in the back of a pickup truck. Great memorable find. At race end, found out what happened: the volunteer that was to set that control, went first to set a control in the wilderness, and then, later was to hang that to the trailhead (which was 40 meters from the pickup truck). He said he never expected a participant to get there so early. 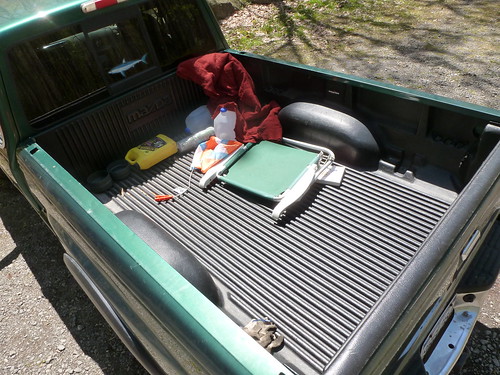