First, a point density plot - each point in each race corresponds to a specific finisher. Horizontal axis within a race bar is meaningless. 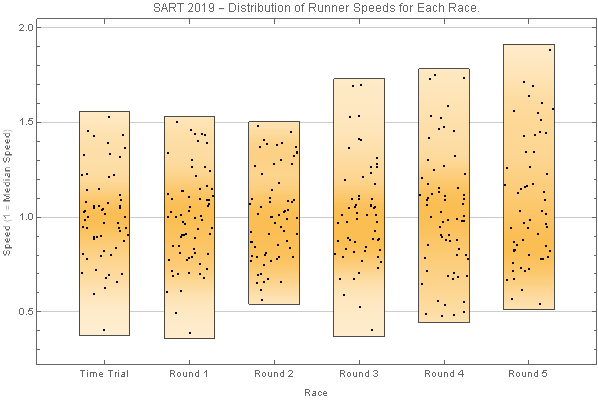 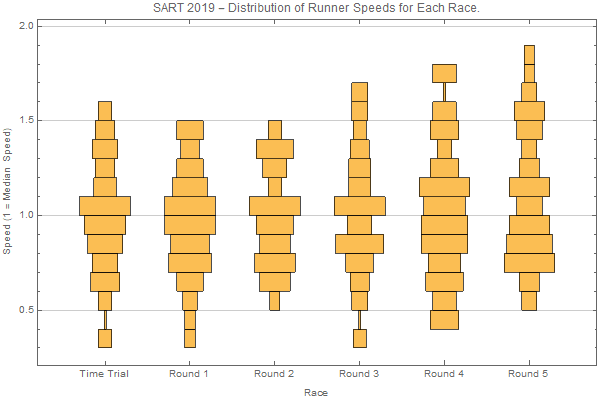 And lastly a quartile box and whisker plot, where the central box depicts the speed range from the 25th percentile to the 75th percentile. That is to say, 50% of all competitors had speeds in that range. The whiskers cover the top 25% and bottom 25%: 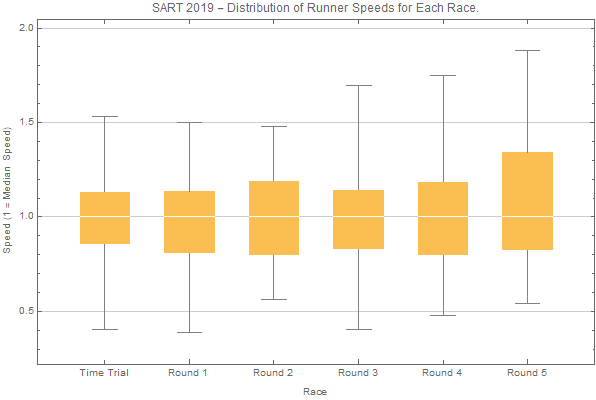 No surprise that the final has the widest spread for the middle half of competitors - from 82% to 134% of median speed.

The Time Trial featured the tightest central pack - 86% to 113% covered half the runners!

It's also notable that the boxes are all essentially symmetrical about the median speed, except for Round 5. I think this means that mid pack runners were more mistake prone on Round 5 than either the faster or slower groups.

Thanks again everyone who made this possible!
Advertisement
Sep 16, 2019 2:41 AM #
EOC:
Oh, and the speeds required to be a top five finisher (by time) for each race:

So it's clear that the top runners' speeds increased as the sorting improved, which makes sense :) It's also pretty remarkable how consistent the cutoffs were on the first day.
Sep 16, 2019 6:19 PM #
ledusledus:
Note that the first 4 rounds are "put the map in pocket, follow Jourdan and count controls" rounds. The last one is "Jourdan is gone, now it is up to me, uh-oh".
Sep 16, 2019 6:36 PM #
Pink Socks:
Following on that thought, is there a way to compare performances of each heat within each round?

I suspect that Jourdan's misrepresentitve low seed (due to a mispunch in the seeding race) would have noticeably bumped up the performance of every heat he was in. The "group of death" quarterfinal (!) of 4 guys with sub 5:20 mile speeds was particularly insane!
Sep 16, 2019 7:02 PM #
emmaS:
Also (semi-related), Jourdan and Kai's low seeds affected qualifications of other runners, for example @EOC (who placed directly before or after me in all races but one, where we were two places apart, many of our races were seconds apart) and Mark Prior (who beat me by 25s+ in every race except the TT) both were Q4 instead of Q3 due to Jourdan or Kai being ahead of them, so missed qualifying for top 20 and ended up in the 21-25 final while I ended up in the 11-15 final. Both @EOC and Mark were faster across the races than most people who ended up 15th-20th; heat 512 was faster than heat 513.
--> Unrepresentative seeds resulted in faster people qualifying for slower heats than they should have been in & so fewer close races (I would have liked to have raced more people close to my speed but didn't get the chance) and unexpected heat speed orders

Thanks for the cool graphs @EOC !
Sep 16, 2019 8:42 PM #
Pink Socks:
Yeah, the time trial is so short that any non-trivial mistake (or a mispunch) will have reverberations throughout the bracket, which is unfortunate if you get bumped, for sure. That's part of the "mayhem" that we use if the tagline, I suppose.

Some tournaments I've participated in didn't have a seeding race, and the event director subjectively seeded everyone based on an optional prologue the day before, national rankings, opinions, and guesses.

I wanted to remove the subjectively (especially for a bracket 2.5x the size), so I built in a seeding race, for better or worse.

This would have evened out Jourdan's impact for sure, but I feel like this would make the bracket even more confusing to follow for some people. I also might have some PTSD of being asked to figure this out on-the-spot at the other tournament with a time crunch and a bunch of people hovering over me, haha. I don't want to overburden our results gurus who have coded the bracket so that we can have relatively efficient results and start lists ready to go!
Sep 16, 2019 11:42 PM #
FrankTheTank:
If you wanted to seed based on speed alone you could always run the prologue on the 400m oval, 4 laps oughtta do it, no map required. That kind or takes the AR out of SART though. I wish SART was invented back when I had good knees. It always looks like lots of fun.