Clubs who allow course designers to also make the maps get in trouble (as with Peter's experience at the GA SML champs where he withdrew). At a CNYO-held champs they got in trouble on one day when a control location was mismapped and whether you found it quickly depended on which direction you approached it from (different courses had different approaches). At that same event a young Erin S removed a day two course control when picking up day one controls. So I think there were protests both days.

This is #3, right?
Advertisement
Jan 4, 2020 4:17 PM #
jjcote:
I'm not 100% sure, but I think the awful map from the mapping clinic was the Bubbagoat map itself, and the area that we were using for practice was the hill SSW of #3 and down toward the open area. There are clearly things going on with the contours that are nonsensical, but I believe it was even worse than it looked, even in the places where you thought you could decipher the contours, the terrain didn't look like the map showed. But like, what the hell is going on here? 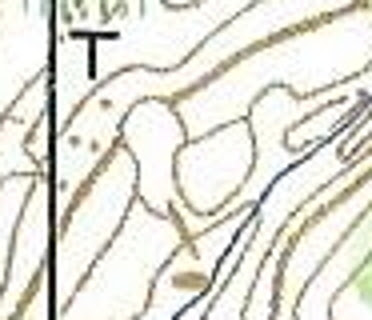 I think Sam had also set this course, at least, don't remember about the A-meet courses the following weekend. Maybe a different course setter would have taken the more rational approach of putting all of the controls on trails, since they were the accurate aspect of the map.

The CNYO meet that you mentioned is coming up (if it's the one I'm thinking of), although my course was not affected by the snafus.

I think Sam was the mapper for that GA SML event also.
Jan 4, 2020 9:12 PM #
jjcote:
Sam was mapper for everything, definitely, but I don't remember whether he set the A-meet courses.