Apr 24, 2020 12:49 AM #
eddie:
I ran the predicts for Truckee and realized that since the orbital period of these guys is 90 mins and Truckee is ~ the same latitude as D.C. you'll see the same passes two orbits later at nearly the same local time:

Here are the exact predicts and sky charts for Truckee. Look for these the evenings of Apr 26-29. Best passes are on Mon/Tue the 27 and 28th. The exact tracks will likely change a bit before then, but as of now the pass on the 28th will go by Venus and very close to the crescent moon in Gemini.
Advertisement
Apr 24, 2020 3:08 AM #
biggins:
Nice, we'll keep an eye out.

Fun fact - my first house out here was only something like 200m south of the latitude of the Towson house.
Apr 26, 2020 7:14 AM #
eddie:
Ha, reminds me of that Dr. Seuss book with the Zax. A highway was built over the top of them because they refused to budge from their line.

The starlink-6 bunch has split into two dense groups. The original group has basically the same timing as before, but 19 of the sats have been raised about 20km (perigee) and as a result are falling behind the main group. Both groups are very compact and worth trying to see. The second group will be 15-20 mins behind the first as of Monday and will continue to fall further behind.

Even though both groups are still in the same orbital plane they will cross different parts of the sky due to the rotation of the earth between the two passes. One or the other (or both) might be favorable, so check the predicts for both so you'll know where to look.

Here are the predicts for the leader sats in each group for Truckee:

There's a relatively low pass of group2 tonight, Sun Apr 26 at 8:50 PM PDT in the NNE. Will pass below Polaris.

Good passes of group1 on both Mon and Tues nights, 27th/28th. On Monday the group will cross directly over Polaris, and on Tues very close to the crescent moon in Gemini.

Looks like you'll have great weather. The forecast is lousy for us in the NE. You may be our only hope, Obi-Wan...
Apr 27, 2020 3:06 AM #
eddie:
The main group is on the move. They started raising the orbits of group1 this evening, so the pass times are starting to slide later. Check the predicts before going out to watch.

Here's a plot of the perigee-apogee altitudes of the whole constellation, with starlink-6 shown in purple: 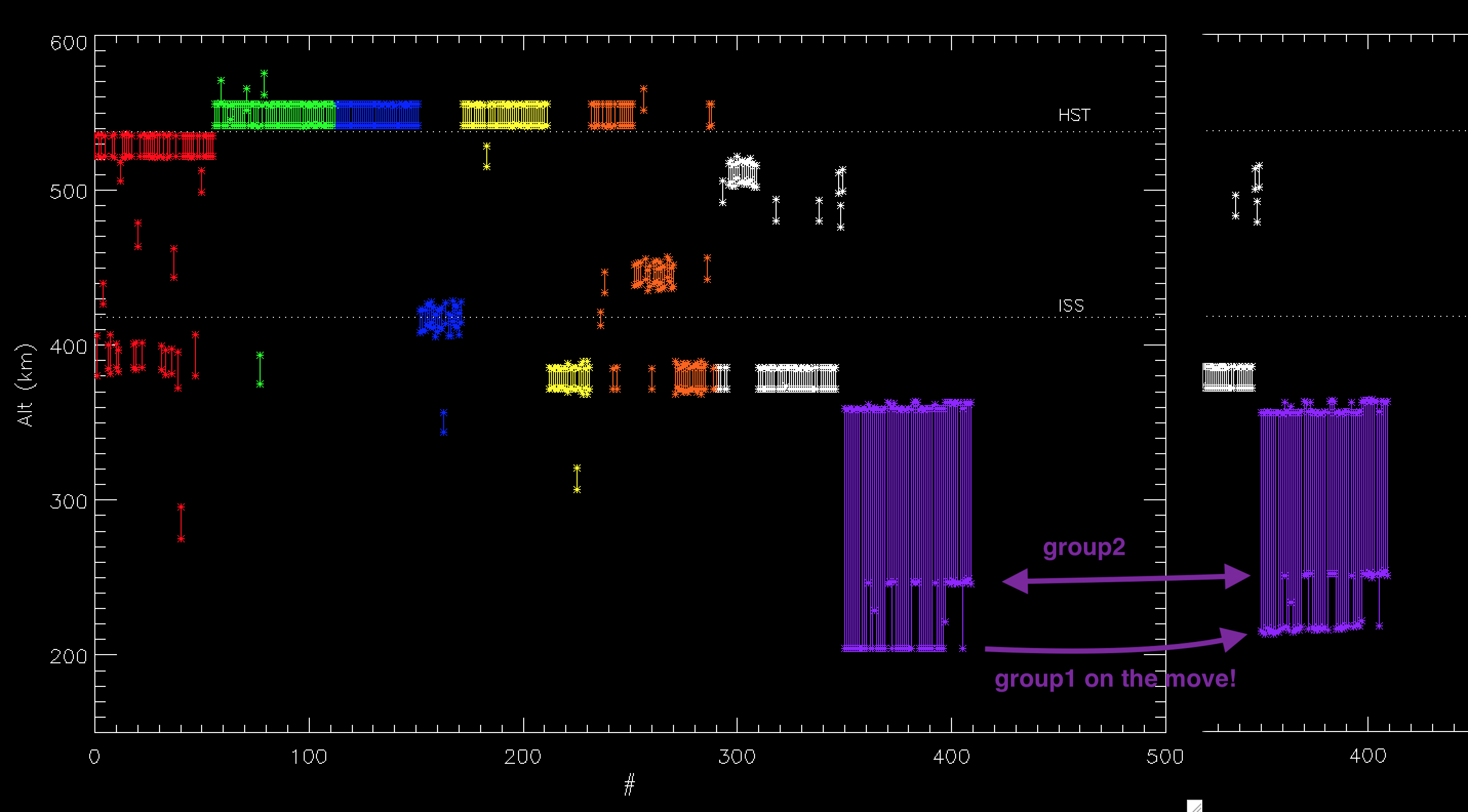 Apr 28, 2020 1:16 AM #
eddie:
Greg, both passes were visible and awesome from here tonight!! The first group went through two spots that flared as each of the 40 sats went by. The second group which was directly overhead here was also very bright. I highly recommend getting out tonight to see both passes from there.

Is it possible to see them from Moncton, NB. My dad is really into space stuff and Elon Musk so would love this.
Apr 28, 2020 4:21 AM #
biggins:
Yeah it's a bit hazy here, so the first ones we could only see during one flared spot, never more than 1-2 of them at the same time. Second ones were higher and clearer so we could see the whole train.
Apr 28, 2020 4:36 AM #
eddie:
Nice!! Did you notice any bright "flaring" during the first pass?

It is possible to see the starlink sats from Moncton. Unfortunately the orbital plane of these particular groups are precessing westward and won't be visible again until May 21/22 (morning passes). By that time they'll have spread out a bit. There is one more visible pass of group2 on Wed night from Moncton, but it will be very low in the SW and rather faint. The brightening moon won't help. Here's the predict for Moncton in case he wants to look though:

There are still some dense groups from the other launches, and the next bunch (starlink-7) is scheduled for launch on May 7. With luck that one will be in a favorable plane for us to see shortly after launch. I'm working on a simple .html file with links for predictions of the dense groups that people can use for any observing location.
Apr 28, 2020 4:41 AM #
eddie:
Whoops. Yeah, same here. I had the camera running but I couldn't see the sats by eye until they started flaring. After that I could see the individuals between the flares. The sky was still a little bright for the first pass which made it harder to see.
Apr 28, 2020 5:09 AM #
eddie:
Single 10s frame from group 1 passing though the little dipper. 4 flares visible. Star at left-center is Polaris: 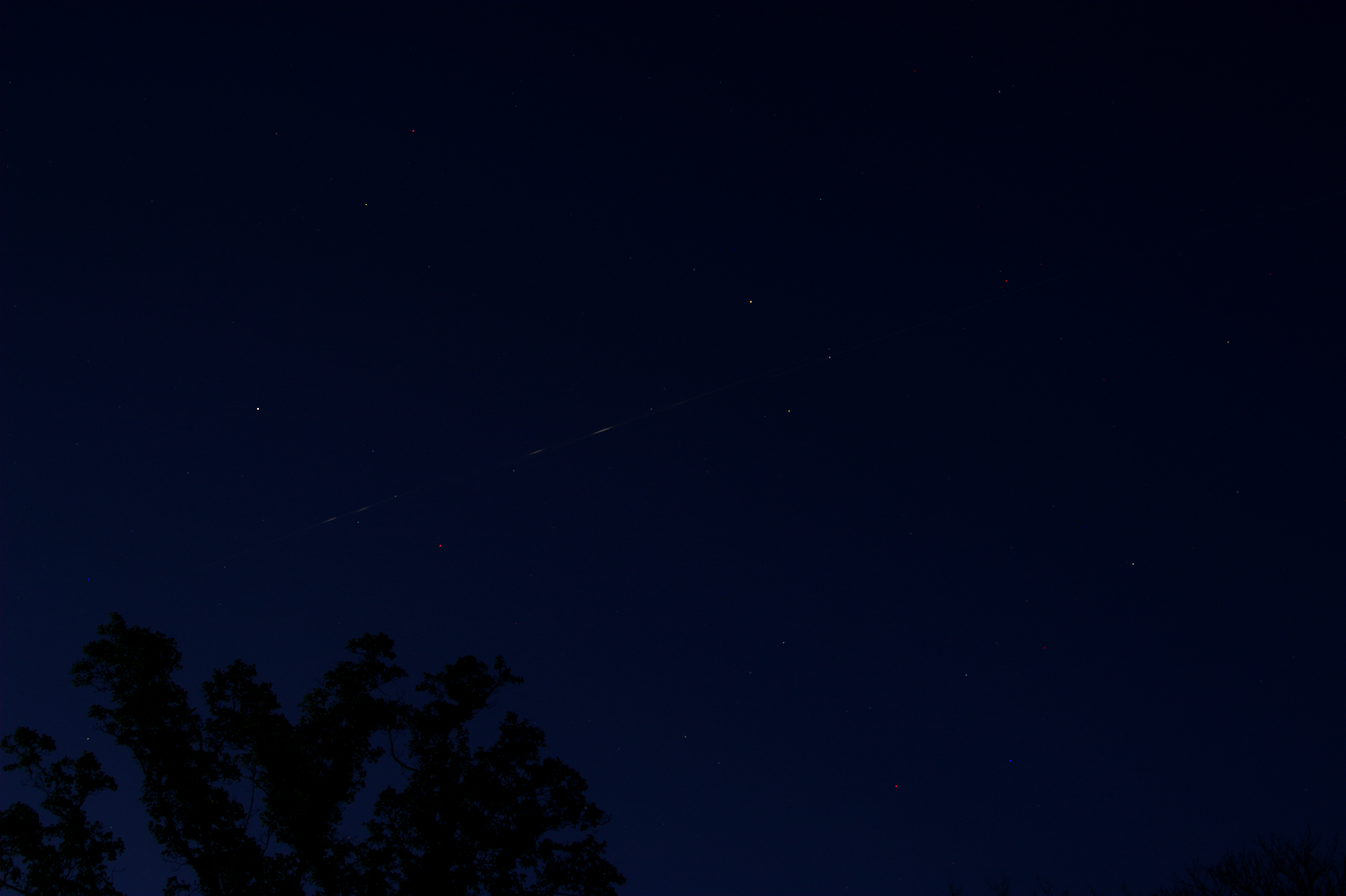 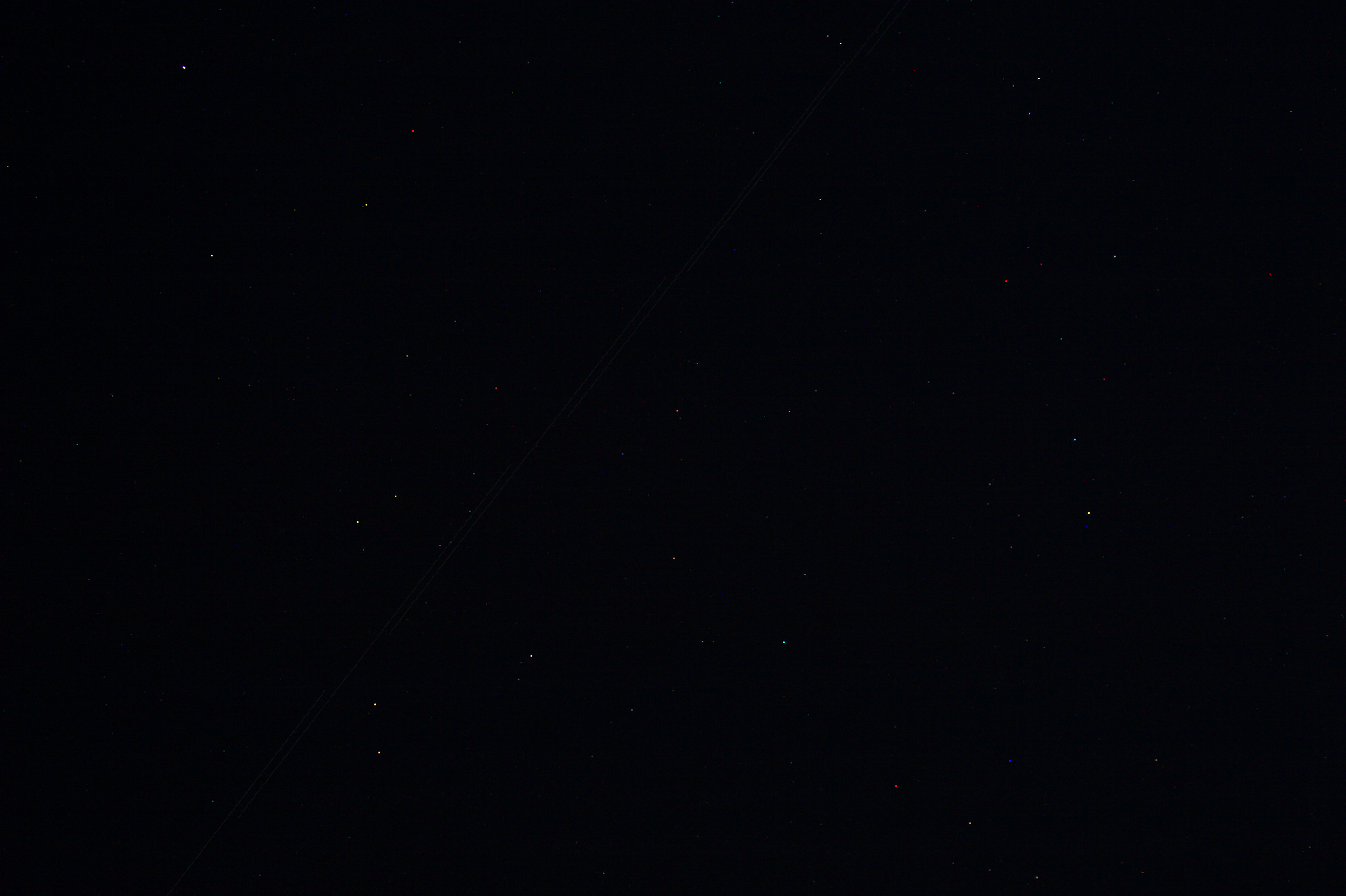 Still working on the stack. The changing sky brightness makes it harder.
Apr 29, 2020 12:22 AM #
eddie:
Looks like it'll be clear out there tonight. Would be interesting to see if you get any flaring from the group1 pass in the SW this time, near Venus and the moon. Tonight's pass starts just before 8:50 PM PDT.
Apr 29, 2020 1:25 AM #
eddie:
Just watched the group1 pass through holes in the clouds. Saw 5-6 sats - they were nice and bright. Got a couple of crappy pics. Wanted to get the train going right by the moon.

They'll pass just below the moon and Venus as seen from Truckee. Halfway between the moon and Beetlejuice at the top of Orion.