Jun 16, 2020 9:14 PM #
jjcote:
There was plenty in Townsend when I was growing up, including in our back yard, so I hardly take notice of it; I assume I still see plenty, but I'll think about it now.

One unfortunate incident occurred when I was in junior high, and one of my neighbors was in 6th grade. The science teacher said that if anybody could find some sassafras, they should bring it in, because you can chew the roots and it tastes like root beer. My neighbor Bill brought some in, the teacher confirmed the ID, and passed it out to the class, and to his other classes. Maybe it was partly sassafras, maybe even mostly sassafras, but some of it was poison ivy. Of the kids, Bill got the worst of it, his head ballooned up and his eyes swelled shut. But the teacher wound up in the hospital.
Advertisement
Jun 16, 2020 9:30 PM #
JanetT:
Ouch.

My sister and I tried to boil the roots for "root beer" once, but it was nothing special.

As for poison ivy, it's one of those demon plants you wish would go away. A friend and I happened upon a patch once and were out of school for a few days when we got bad rashes.
Jun 16, 2020 10:31 PM #
Charlie:
Lots of sassafras here at Ratlum.
Jun 17, 2020 5:29 AM #
Swampfox:
That might also explain lots of Luther at Ratlum. The only thing big bears like better than honey is sassafras with honey. You might think I'm joking, but try it: lay out a nice helping of sa
Jun 18, 2020 12:04 PM #
jima:
It appears that the bears got Swampfox mid-thought...
Jun 18, 2020 12:39 PM #
tdgood:
Sassafras is still quite common down here in the D.C. Area. We had it growing in my backyard where I grew up. I once transplanted a Sassafras tree from our backyard to fellow cross country team member's house who didn't have any trees in his yard. The catch, I did it in the middle of the night so he would have a tree in his yard that could be covered (rolled) with Toilet Paper. His family work up with a new tree covered in free flowing paper products.
Jun 18, 2020 4:09 PM #
Swampfox:
(much, much later)

I was typing away when I heard some kind of strange sounds outside, snuffling sounds maybe, coming closer. I looked out the window and could barely make out some large, rounded, furry shapes headed my way. Uh-oh. I dashed for the refrigerator and grabbed several very hard to peel oranges and then deployed them out the window and then scrambled to the garage while the bears were distracted. I drove the 20 miles up to Bosler as fast as I dared.

The advantage with Bosler is it is surrounded by miles and miles of open prairie, so you can see bears coming from a long way off. No sense in taking half measures when it comes to bears--at least not in these parts. About 1% of the time bears won't be hungry and maybe they won't be interested in you, but the other 99% of the time...well, there's a reason why blind corners on trails up in the Grand Tetons are called bear feeding stations.
Jun 18, 2020 6:55 PM #
Charlie:
Bears are getting more accustomed to people around here and bolder. Rhonda had a little standoff this morning with one in the vicinity of her flower garden this morning, around the same time I was having a little standoff with a deer near the yoga barn. We met up in between to compare notes.

Here is a picture of a stand of sassafras at Ratlum. Zack is rather partial to them, particularly because he likes their fall color. 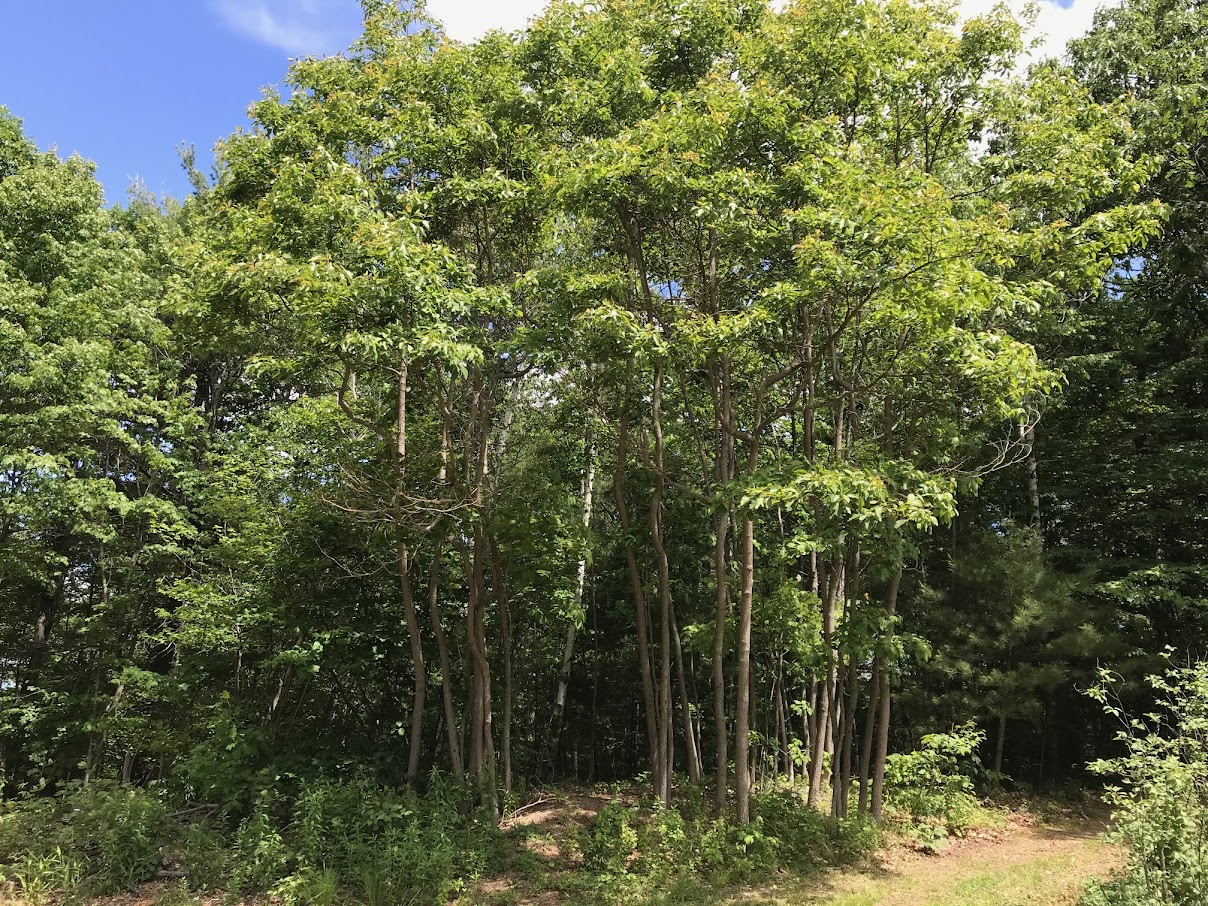