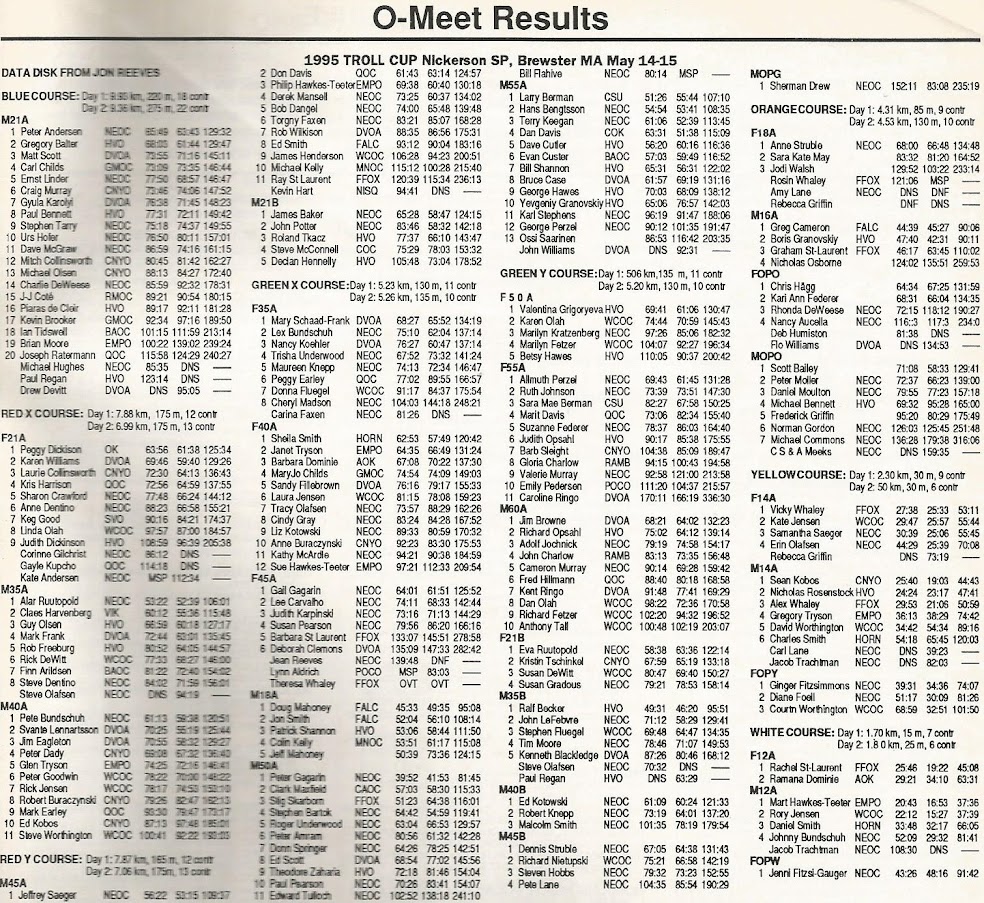 I see the names of several Juniors who are still orienteering. I also see someone who has become better known since then (this was at the beginning of his career), and this may have been the event where he was famously stealing food from people right out of their hands.
Jun 25, 2020 8:04 PM #
Cristina:
The fact that there are several Juniors from that event who are still orienteering, 25 years later, is a great testament to our claim of being a lifetime sport. I bet a results list from a youth football tournament 25 years ago would not have that kind of retention.
Jun 25, 2020 8:07 PM #
jjcote:
There are also a number of people who were already old 25 years ago who are still orienteering.
Jun 25, 2020 8:36 PM #
JanetT:
@coach, I remember a Mother's day Troll Cup where mothers received large tissue paper flowers...I don't know if this was the year.

Does anyone know what club HORN would be (Sheila Smith, 1st place, F40)? Is she one of the famous Canadian Smiths, or perhaps a European?
Jun 25, 2020 9:06 PM #
Canadian:
+1 Cristina. I was thinking the same thing. Let's give ourselves some credit rather than always being so hard on ourselves
Jun 25, 2020 9:15 PM #
chitownclark:
Janet, you were holding your own in 2nd in F40 until Sheila beat you by 9 minutes on D2...then disappeared? Who was that masked woman?

And I too finished in 2nd. Why oh why did PG decide to run his age that meet? I finished over 30 minutes behind him! But Evan Custer from BAOC was my real competition; we finished D1 tied, and I edged him out on D2...and an immediate friendship was formed.

That was only my second year of O, and loved everything about it: the competitions, the people, the inherent freedom of the sport...and the exotic venues it introduced.

O on The Cape? I'd taken Amtrak from Chicago, spent two weeks visiting New England friends and relatives, and reminiscencing about the Summer of '64, when I was attending Navy OCS in Newport, R.I. and spent each weekend on Craigville Beach in Hyannis, meeting Ivy League co-eds and enjoying the vibes. Does anyone remember Pembroke or Radcliffe?
Jun 25, 2020 9:32 PM #
gordhun:
JanetT: Sheila Smith was most likely a Canadian from the province of New Brunswick but not of the more famous Smith family. She started orienteering as Sheila Mitham of Montreal, competed on the Canadian team several times them married Robert Smith of the US. Her sons also competed for HORN in the 1995 Troll Cup event. Robert was nowhere to be seen.
Besides HORN there were two other New Brunswick teams at that event, Falcons (Moncton NB and the other Smiths) and FFOX or Fredericton Foxes.
What did HORN stand for? Well, I can only guess but Sheila lived in Hampton NB so HORN may have been someone's idea of an abbreviation for Hampton Orienteering.
Jun 25, 2020 9:59 PM #
JanetT:
Thanks, Gord; makes sense.

I'd only been orienteering for 4.5 years at that point, but I *had* attended Bill Shannon's O Camp either that spring or the year before (and had my breakthrough with contours). Must have helped. ;-)
Jun 26, 2020 5:23 PM #
coach:
@Janet..Yes it was the paper flowers, as Judy reminded me yesterday. She spent quite a few hours making them on Saturday night and Sunday morning!
"Disappointing" was not what I was feeling reading the results, more of, geez, I remember those kids, from meets and training camps, and wonder where they are now.
It could be interesting to survey them, and those that are still O'ing, and hear what they have to say about still being active, or why they are not.
Jun 26, 2020 8:17 PM #
Charlie:
A couple of memorable things to me from the A-meet. One was Sunday morning, out for breakfast in a fairly crowded restaurant. At one point wafting over the hum of conversation I heard a single word from the other side of the restaurant, and I thought: hmm, there are orienteers here. A glance over that way confirmed it. The word: "unfair".

The other, a Sunday afternoon visit from that renowned orienteer, the late Jerry Rice. He showed up, not to compete, but to show off his new girlfriend Nora. Quite young, somewhat flashy clothes, lots of makeup, etc. Not the kind of person one often sees at an orienteering meet.
Jun 26, 2020 10:05 PM #
JanetT:
Thanks to Judy for making memorable (at least to some of the moms) Mother's Day gifts! :-)
Jun 27, 2020 1:19 AM #
gruver:
Er, note to self. Go easy on the makeup on orienteering days..
Jun 27, 2020 1:29 AM #
jjcote:
Jerry and Nora never got out of the car. He just rolled down the window to chat. I don't think she was wearing the right kind of shoes for that venue.
Jun 27, 2020 4:36 PM #
yurets:
Nora did not impress Charlie...what a shame
Jun 27, 2020 5:06 PM #
jjcote:
She might have impressed Charlie. Not so much with various people's wives who were standing nearby.
Jun 27, 2020 11:08 PM #
Charlie:
Not my type. But I do recall the wives.
Jun 28, 2020 2:38 AM #
jjcote:
I asked Nancy, and she doesn't remember anything about the tie for second place. Because it was a chase start on Day 2, they must have crossed the line together. We can't remember if it was before she and Lex knew each other, but it was before I met her. However, Nancy the lighthouse aficionado did remember something else about that weekend: 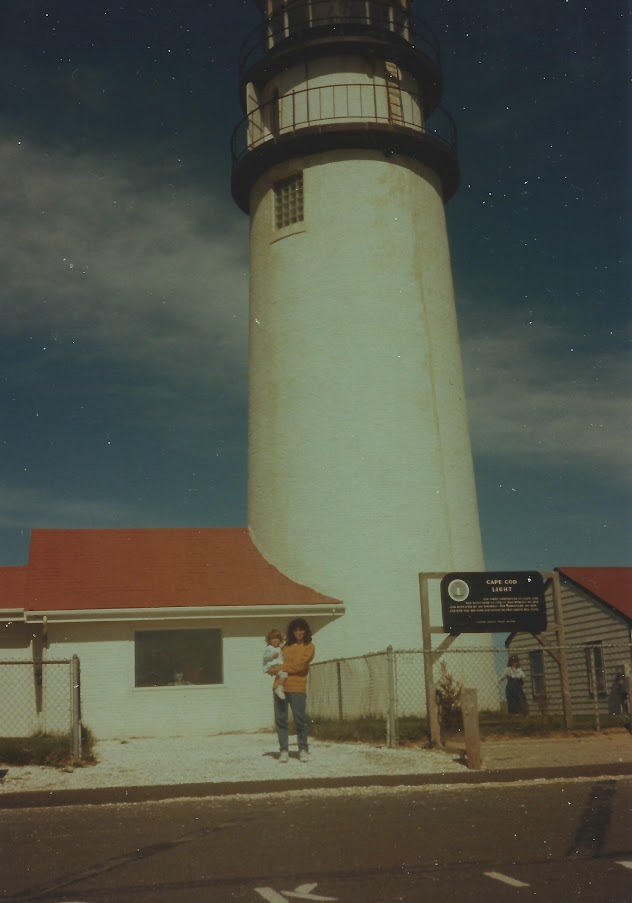 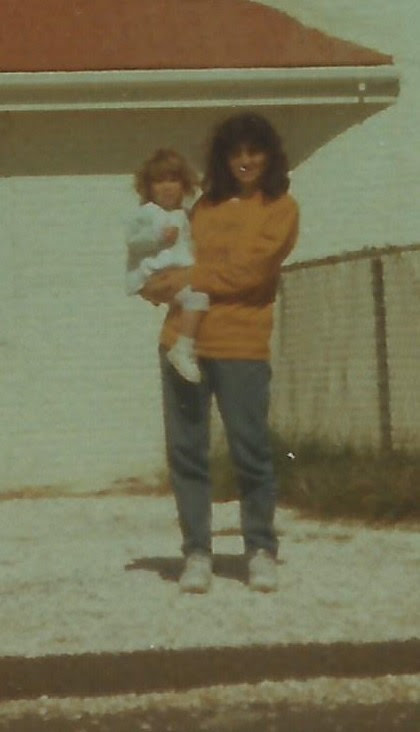 That toddler is Nicole, whose wedding reception I would have been at right now if it hadn't been postponed due to the pandemic.
Jun 28, 2020 3:36 AM #
j-man:
The 1995 version of Balter was formidable indeed.
Jul 1, 2020 8:53 PM #
yurets:
Could this be due in part to wearing special tights with improved aerodynamic characteristics?