I hope when you talked with the surgeon yesterday you discussed eating Surstromming tomorrow.
Advertisement
Aug 19, 2020 7:00 PM #
Swampfox:
I celebrated with an alternative Surstromming dinner, consisting of a homemade cheese calzone. It was quite delicious, and the only fermentation required was the preparation of the dough.

I can heartily recommend this alternative to anyone who does not have ready access to Surstromming, or for the very, very few who might have access, but who don't actually relish Surstromming.
Aug 20, 2020 2:16 AM #
jjcote:
Surströmming pizza, whaddya think? A step beyond mere anchovies.
Aug 20, 2020 4:38 AM #
Swampfox:
I'm not relating. It's like taking a perfectly good hamburger and smearing mayonnaise on it. Why would you do it? And from my sampling of pizza places in Sweden last summer, you could travel far and wide without finding a place that would offer surstromming. Think about that. There's probably a good reason for it.
Aug 20, 2020 11:40 AM #
PG:
Think about that.

OK, let's think about it.

Were you in Sweden last summer on the 3rd Thursday in August? Nope. Would pizza places put surstromming pizzas on the regular menu if they weren't available year round? Nope, they'ed be a special. So what are the odds that when that Thursday rolled around last summer almost every pizza place in Sweden was offering one? Pretty darn good, I'd guess.
Aug 20, 2020 11:53 AM #
jjcote:
Pics or it didn't happen: 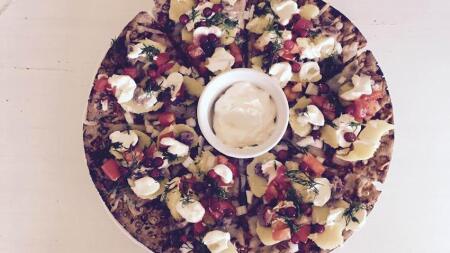 'It’s on rye bread with a dill and tomato sauce and topped with surströmming, boiled potatoes, dill, tomatoes and onion. It’s decorated with lingonberries."
Aug 21, 2020 4:16 PM #
Spike:
The way to figure out if you could get surstromming pizza is to check Samantha's log. Clearly, she'd note that she ate surstromming pizza yesterday. I checked her log and there's no indication that she ate surstromming pizza. So surstromming pizza must not be a thing. Of course there are other options. Like maybe she doesn't really live in Sweden.
Aug 21, 2020 6:25 PM #
Swampfox:
I am pretty sure that each of you, if offered surstromming for dinner or something else, you would choose something else. There is a reason why McDonalds does not feature surstromming on the menu.
Aug 21, 2020 8:28 PM #
jjcote:
McDonald's had lobster rolls a couple of years ago. You never know.
Aug 21, 2020 9:07 PM #
PG:
Doesn't matter what Swampfox says, JJ and his photo win.
Aug 21, 2020 9:10 PM #
Spike:
What if the choice was stepping on a honey locust thorn in your bare feet or eating surstromming?
Aug 22, 2020 1:39 AM #
Swampfox:
@JJ: taking out a piece of flat bread and throwing a bunch of stuff on it and calling it pizza doesn't make it pizza. That wouldn't fool anyone. If a classic pizzeria tried serving that, there would be rioting and heads would roll.
Aug 22, 2020 3:28 AM #
jjcote:
Fish heads.
Aug 22, 2020 3:20 PM #
coach:
On August 3 last year, Cafe Victoria was NOT serving any fermented fish, atop pizza, plate or bread.
Aug 22, 2020 3:35 PM #
bubo:
The fact that surströmming isn't mentioned in Sam's log is no proof she didn't have some. Very few of us actually log what we eat (or not) unless it comes to beans.
Aug 22, 2020 3:40 PM #
Spike:
Thinking back of my time in Sweden. I believe I ate surstromming 3 times. But never as a pizza topping.
Aug 22, 2020 3:41 PM #
bubo:
PS. Another Swedish tradition - definitely tastier - is the yearly crayfish party /kräftskiva/ which we will have tonight. We're lucky enough to have access to our own lake for fishing so that's what we were doing last night.
We're not following the full 'protocol' though, funny hats and booze will be absent.
Aug 22, 2020 4:13 PM #
Swampfox:
I'll bet if you forbade alcohol consumption with surstromming, surstromming would quickly disappear, and not be missed. Even the traditionalists would admit it was a waste of perfectly good herring.

It's like the mapping of undersized, deteriorated rootstocks. If mappers would stop doing that, nobody would miss those features, and the world would be a happier place.
Aug 23, 2020 1:06 AM #
jjcote:
I've never been anywhere near surströmming, but my mother used to make sill for her brother every Christmas. One year my cousin and I dared to try it.

It's not August 3rd, Jeff. It's the third Thursday in August.