When I look at the leaderboard for my local area and multiply the "percent complete" by the number of streets (n = 134), I get values that round to integers. Seems relatively unlikely that happens by chance.
Advertisement
Jan 17, 2021 10:42 PM #
bhall:
As someone that does not have the paid version, it seems to me like it is based on streets. I've been judging my progress based on that assumption at least. If someone knows otherwise (@Cristina) I would love to know.
Jan 21, 2021 11:26 PM #
blairtrewin:
Fairly sure the free version tracks streets, although two quirks of this are: (a) if a street crosses a municipal boundary you get credit for it twice (this happened to me yesterday) and (b) if you go past both ends of a single-block street you get credit for it without going down it (since you've been to all its "nodes").
Jan 22, 2021 10:23 PM #
JanetT:
It's based on streets (short ones are "worth" as much as long ones) and nodes seem to depend on how the bezier curves for the roads were drawn, although driveways off them may also have some effect. I haven't figured that out yet, but have gotten involved in editing OSM in my township (deleting roads that don't exist, though a part of CS seems to think they're still there).
Jan 23, 2021 11:28 AM #
Becks:
I need to get into editing OSM too - there’s a few private ways with ungettable nodes in my home village. Lots of short dead ends around here - extra value!
Jan 23, 2021 2:21 PM #
JanetT:
Short dead ends...we found a neighborhood in the next town over that has about 27 streets available in a five mile run (walk)! Lots of boring out and back on short side roads. ;-) 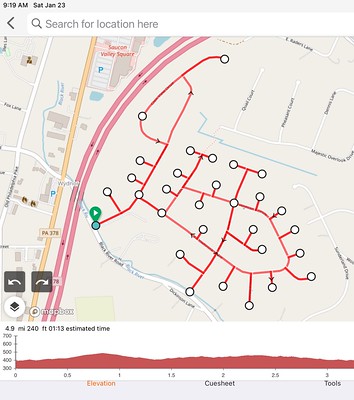 Jan 24, 2021 3:10 PM #
Becks:
Haha! This looks a lot like the next village I am targeting near here!
Jan 24, 2021 8:32 PM #
Suzanne:
I think I used maps.me for Pam editing back in 2016. OSM had better info and better offline use in Namibia and Mozambique than Google Maps.
Feb 3, 2021 9:06 AM #
blairtrewin:
Thought I'd claimed a street name today which I'm pretty sure no-one else on AP would have, but it turns out that Vegemite Way extends further before changing its name than I thought it did and I'd turned off it too early. (You won't be too surprised to learn that the street in question - in an industrial area I was running in because my car was being serviced nearby - plays host to the factory where the aforementioned substance is made).
Feb 3, 2021 10:30 AM #
Becks:
Oh no! That would have been a cool addition to your street list! Hopefully the car will break down again so you can finish it (?!?!). ;)