What color? Did the kids get to pick numbers? My tee-ball jersey was bright yellow, with white pants, and matching yellow stirrups.
Advertisement
Apr 13, 2021 4:42 PM #
jjcote:
Disappointing. I guess pink ones weren't available?
Apr 14, 2021 2:06 PM #
Pink Socks:
It was in St. Louis, MO, where a lot of youth sports are through your local Catholic parish (even if you're not Catholic). I played a year of tee ball and two years of soccer wearing the bright yellow of St. John Bosco!

This may surprise people, but not everything revolves around pink for me! I designed several rec league sports jerseys going back all the way back to college, none of them featuring pink. My orienteering club has pink as a color, and therefore I wear pink socks. My original AP handle wasn't orienteering-specific, so I changed it.
Apr 14, 2021 3:33 PM #
jjcote:
I've got an Orienteering Kansas singlet that features the pink coloring, it's very nice.
Apr 14, 2021 11:24 PM #
peggyd:
It’s distinctive! What other clubs have pink as a color? (Plus, it ties back to historical KU track kit.)
Apr 14, 2021 11:36 PM #
Cristina:
Getting ready to go to the game now, so here's a peak at Lukas showing off his Cactus3 hat and jersey: 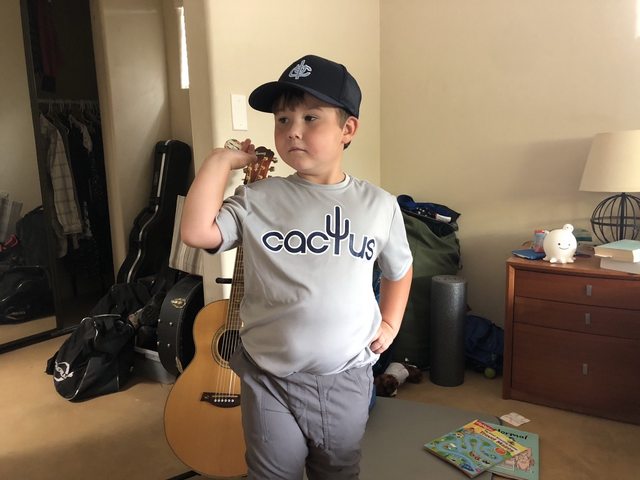 Apr 14, 2021 11:57 PM #
Bash:
He's good at modelling.
Apr 15, 2021 12:27 AM #
peggyd:
Thumbs up on the colors and logo!
Apr 15, 2021 2:48 AM #
Cristina:
Most of the teams in the league are wearing MLB hats and matching colors. The uniform guy told people not to make any requests for/against teams, everyone was just getting what they get. I knew there were two Yankees sets so I had prepared myself for that possibility. And, in fact, we were apparently originally assigned the Yankees but someone told the uniform guy that I was a big Sox fan and he switched us. A very thoughtful guy!
Apr 15, 2021 3:29 AM #
Suzanne:
You grew up in Saint Louis Pink Socks? When did you start orienteering? And where did you go to hs? I went to Rosati. But my parish was Saint Francis Xavier...probably the only parish without youth sports since it was the SLU church!
Apr 15, 2021 4:50 AM #
Pink Socks:
@Cristina, so your team is called Cactus in a league full of MLB lookalikes? What's on the ballcap? Looks like a cactus with some letters?

As I mentioned before, my 1st grade tee-ball getup was bright yellow. For 2nd-4th grades, I played in a community league in Creve Coeur. 2nd grade was gray, and 3rd and 4th grades were navy and red. They all said Creve Coeur on them. After we moved to KC, my last year of baseball we were the Cubs and our jerseys were navy.

@Suzanne. My story is a bit of a buzzkill. We moved to Kansas after my 4th grade year. We had lived in unincorporated St. Louis County out near Creve Coeur and Maryland Heights. I would have gone to Parkway North HS. I didn't start orienteering until my senior year of college in Kansas.

(My parents were both born and raised in Kansas, and most of their families are in Kansas, so we went to Kansas a lot growing up, so I feel like a native Kansan, despite spending 10 years in St. Louis. Because of this, I'm one of those rare people who roots for both the Royals and Cardinals.)

@Peggy. I'm certainly not aware of any other North American orienteering clubs that feature pink. I think Spike showed me a photo of a Euro club wearing pink many years ago?

Aside from the temporary Mothers' Day pink worn in the MLB, and the breast cancer awareness special uniforms, there aren't that many examples of pink in sports. There's KU's track & XC from 1959-1999, of course, which still show up as alternates. Penn State's original colors were pink and black from 1887-1890, and their basketball team has worn those colors as alternates recently. The Seattle Sounders MLS team wore pink-trimmed black alternate jerseys in 2019.

I think the most notable example of pink in sports is the Stade Français rugby team, which went all-in with pink in 2005-ish, as a purposely antithetical rugby color. They wear pink with navy, and they were previously red and blue.
Apr 15, 2021 4:56 AM #
Cristina:
I think in our league (Cactus League) it's just mlb hats with Cactus shirts, just in a color that sort of matches the mlb hat. I guess I'll find out when we play a team in our league on Saturday. Today we played a team in a different (apparently very put-together league) and they had Arizona (DBacks-ish) stuff on.
Apr 15, 2021 7:06 PM #
bbrooke:
Cute pic!!!
Apr 16, 2021 5:58 PM #
Spike:
Euro club wearing pink would have been Lunds OK. About a year after I changed clubs, they changed colors to include pink.