Nov 10, 2021 10:23 PM #
eddie:
There's a crew launch to the ISS from KSC tonight at 9:03 PM EST. Should be visible all along the east coast. Will be in shadow the whole way, but the orange 2nd stage engine should be easy to spot. Here's the simulated view looking over the Tidal Basin: 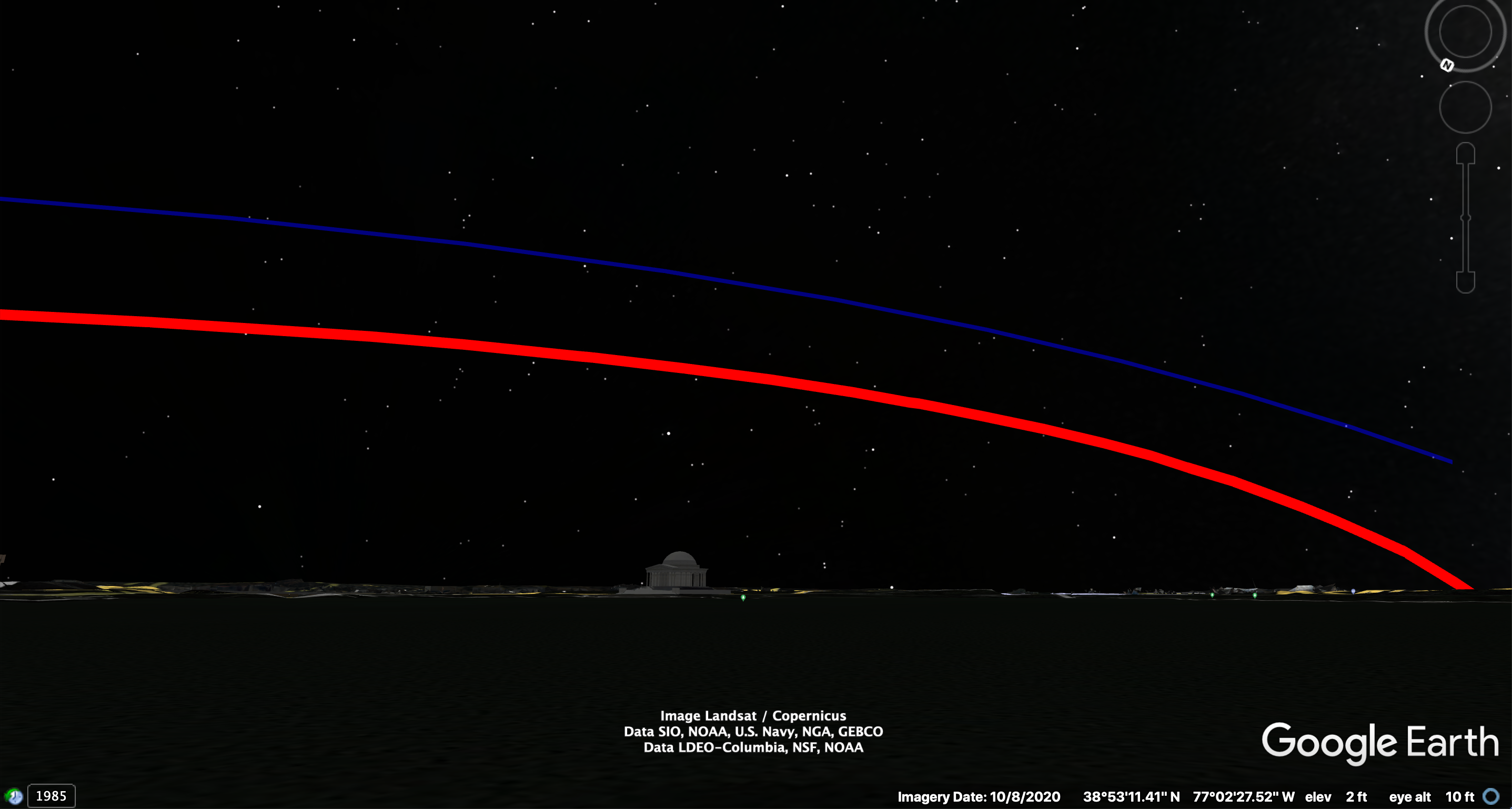 The red line is the Crew Dragon track while the 2nd stage is burning. The blue line is the track of the ISS about 9 mins before launch, however ISS will not be visible since it will be in earth shadow. Max Dragon elevation should be 15-20 deg in D.C.

Here's the view from Boston Common: 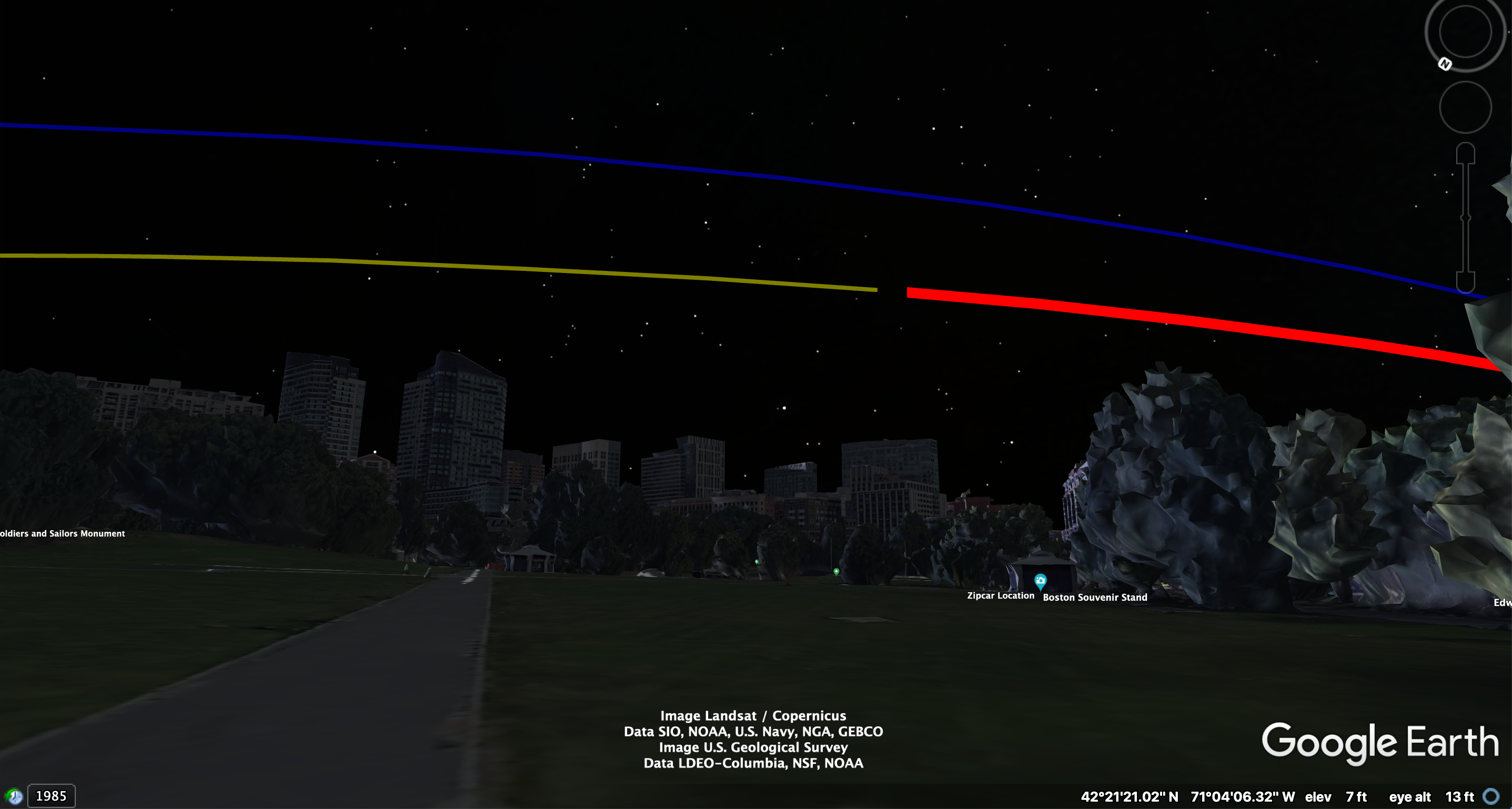 The end of the red track here is SECO (second engine cutoff, 8.5 mins after launch). The green line is the coast track, but it will be invisible after SECO.

Look SW for Jupiter, Saturn (much fainter) and the moon. The tracks should start below those and move left across the sky. Here's the heavens-above sky chart for the invisible ISS pass, but Dragon will follow roughly the same track across the sky 10 mins later (and a little lower).

Online livestream will be here:

Crew is already suiting up and getting ready to head out to the pad.
Advertisement
Nov 10, 2021 10:34 PM #
eddie:
One more view, showing both the Dragon track (red/green) and the ISS pass 9 mins earlier. (blue): 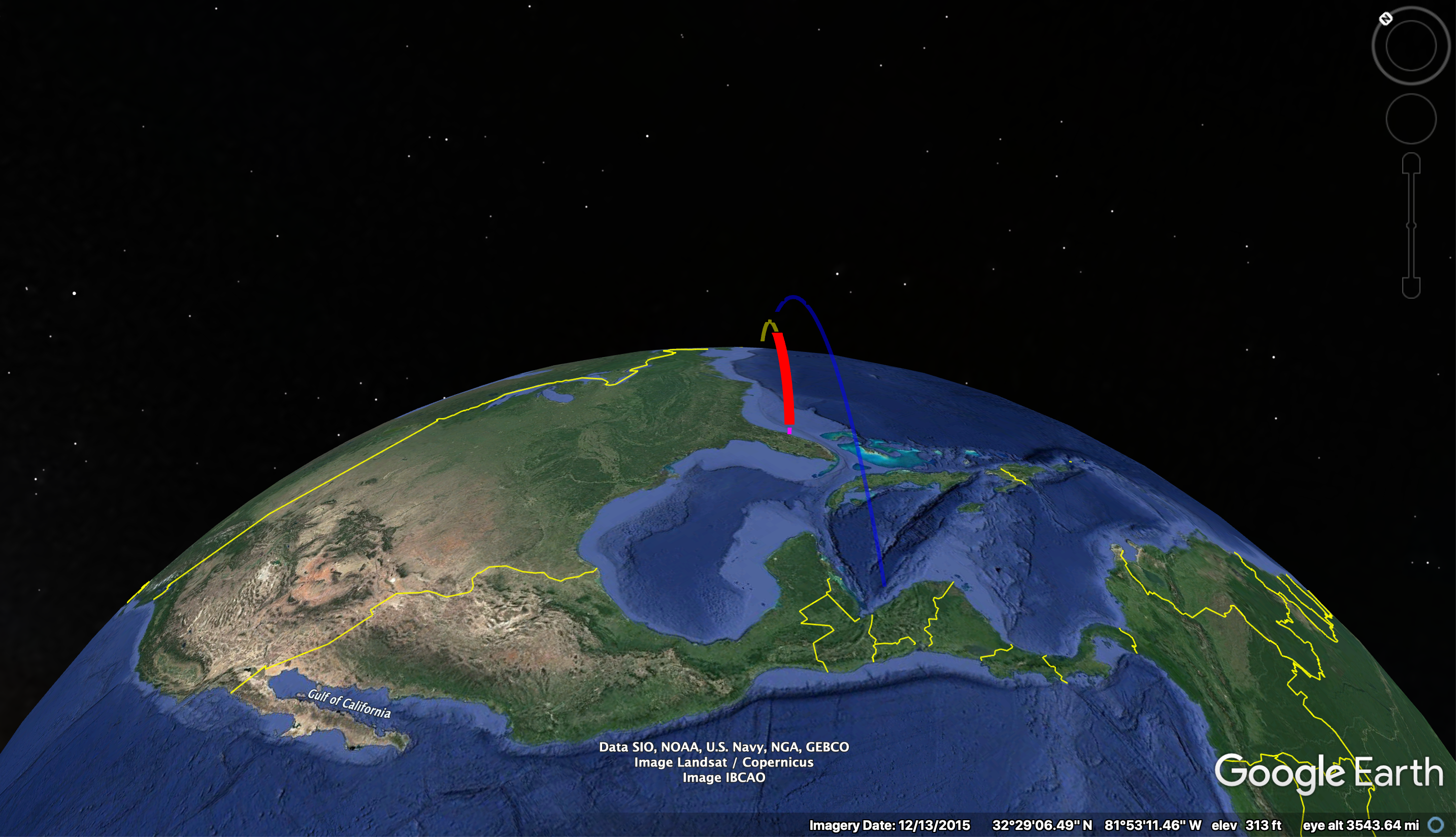 You can see the difference in height between the ISS orbital altitude (410 km) and the initial Dragon orbit which starts at 200km at SECO and then gradually climbs up to meet the station over subsequent orbits.
Nov 11, 2021 1:21 AM #
eddie:
Propellant loading has started. Crew access arm is being retracted now.
Nov 11, 2021 7:24 AM #
eddie:
I went out but didn't see the second stage. Maybe it was too faint. I was also looking a little too far west of south at the start so I might have just missed it. There are some photos online showing the track from the west side of the bay. Fainter than I was expecting. Did see an awesome fireball though. It was due S - just happened to be right where my camera was pointing. Took about a second before I realized what it was and pressed the cable release. Here's the photo: 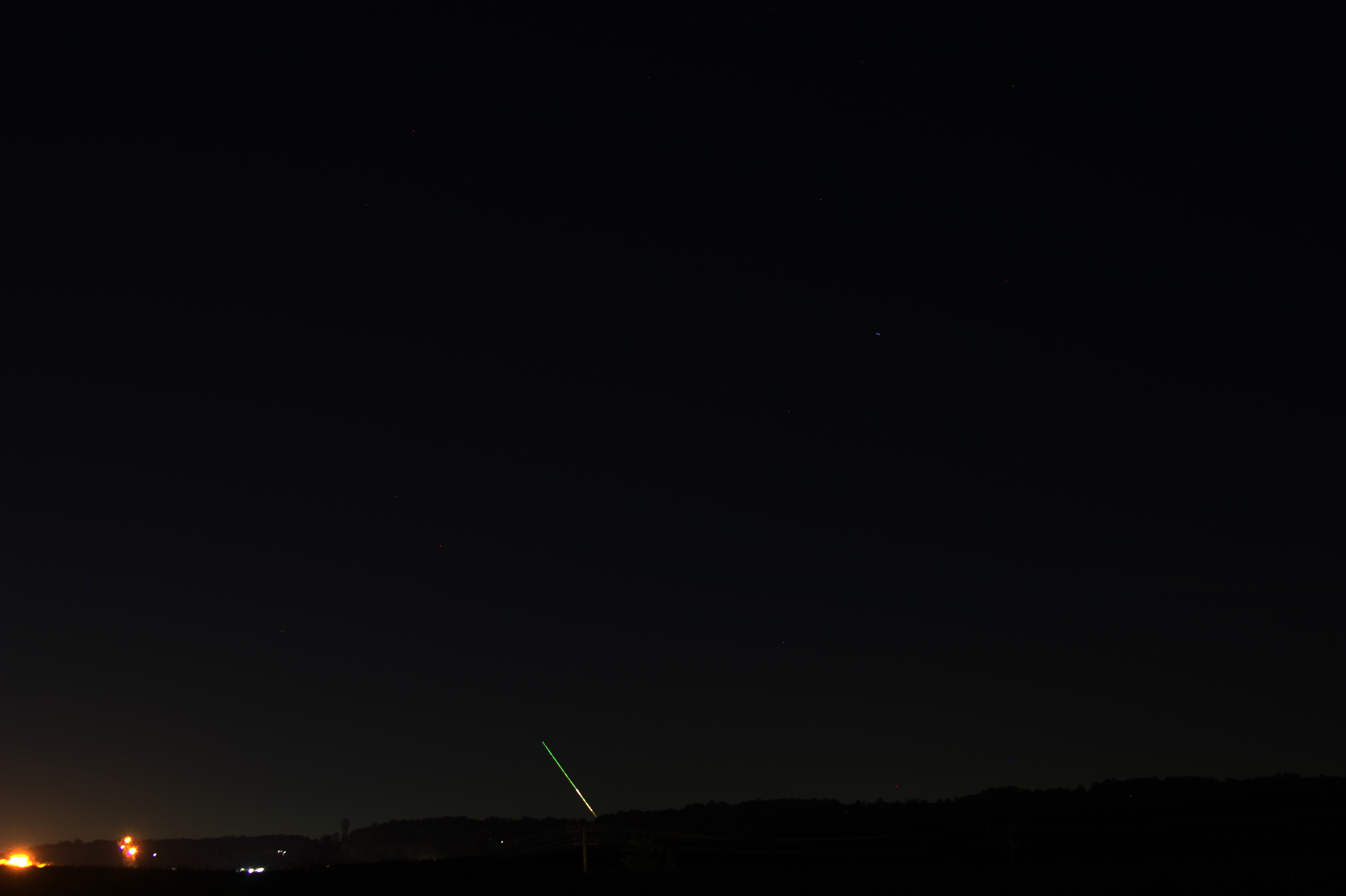 Nice green color, then a yellow flash with fragmentation into about 3 pieces. The central piece continued below the trees on the horizon. Lots of people looking in that direction tonight, so there are a ton of reports:

https://fireball.amsmeteors.org/members/imo_view/e...
Nov 15, 2021 8:23 PM #
eddie:
News reports this morning of the breakup of an old Russian military SIGINT satellite just above the orbit of the ISS. This lead to the astronauts sheltering in the escape vehicles a couple of times already this morning. The State Dept. just confirmed that the breakup was the result of a deliberate ASAT (anti-satellite) test by Russia, destroying its own defunct sat.

The sat in question, COSMOS-1408, is in a polar orbit, with its lowest point just 40km above the ISS. The station will cross the orbit of the debris field ~30 times/day (twice per orbit). The debris is likely to spread out into a cloud along much of the orbital track of the original sat. HST orbits just 45 km above the high point of that orbit, also crossing it ~30 times a day.

Over time the debris will slow down due to atmospheric drag and will drop down through the ISS orbit. I think there's the potential that the ISS may have to be abandoned for some time, or be boosted above the debris. I'm just speculating though. Too early to say. Will take some time for the debris to spread along the orbital track, but given the kinetic energy of a deliberate impact there is likely to be debris well above and below the current COSMOS-1408 track.

I made a kml file with the orbits of COSMOS-1408, ISS and HST as of 2PM EST today and made some views to show how close the tracks are. COSMOS-1408 in red, ISS in blue, HST in green: 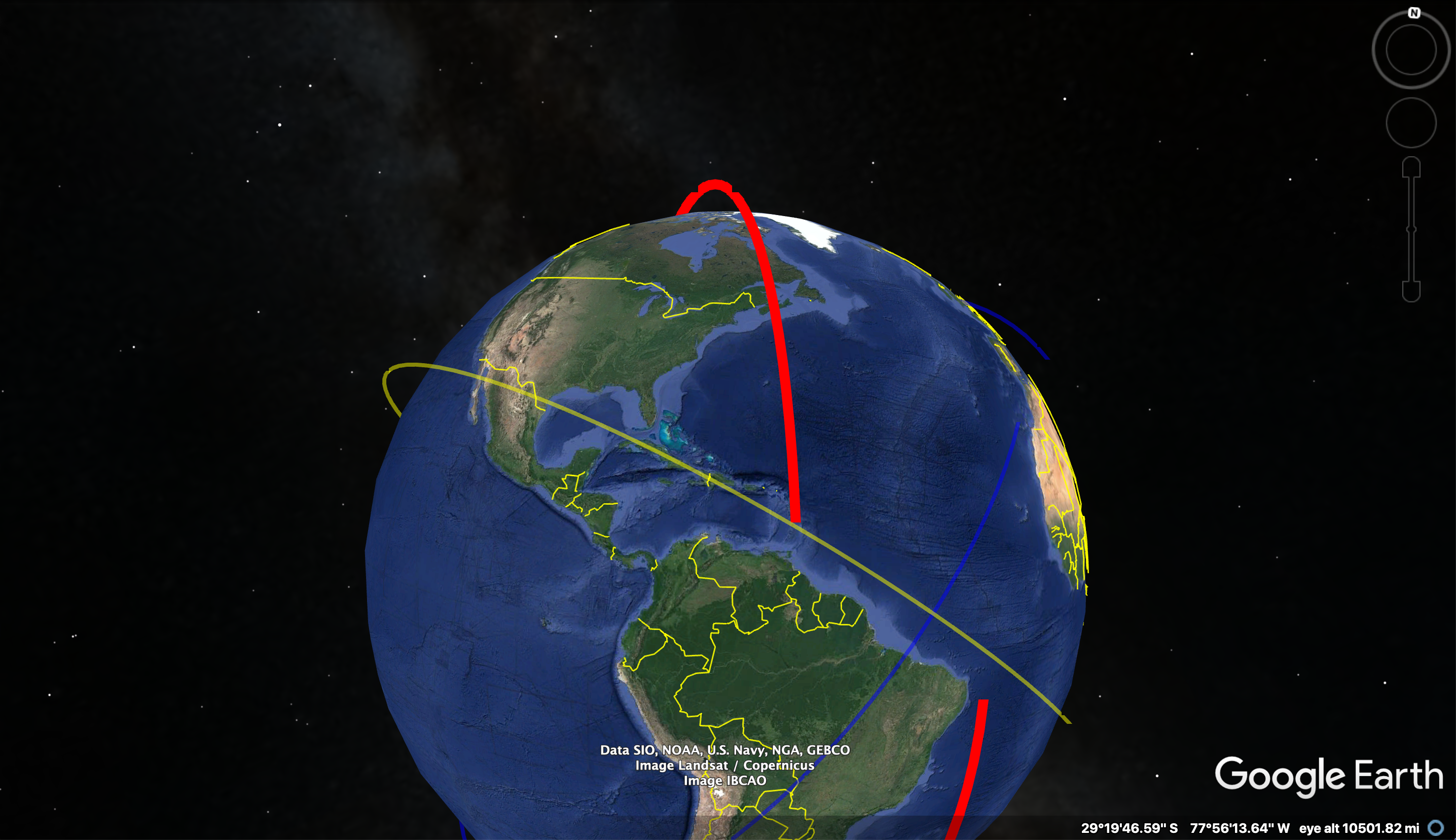 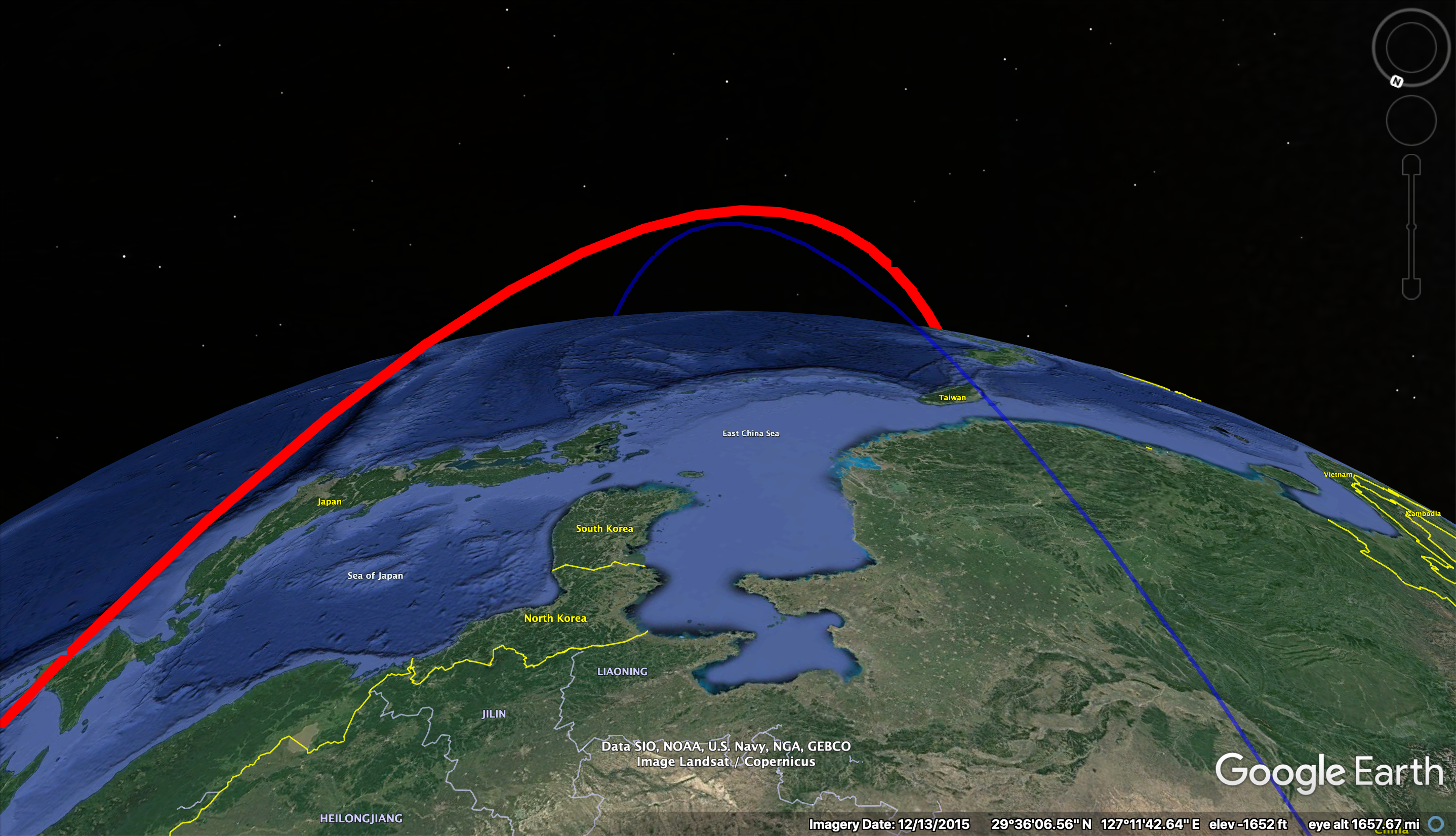 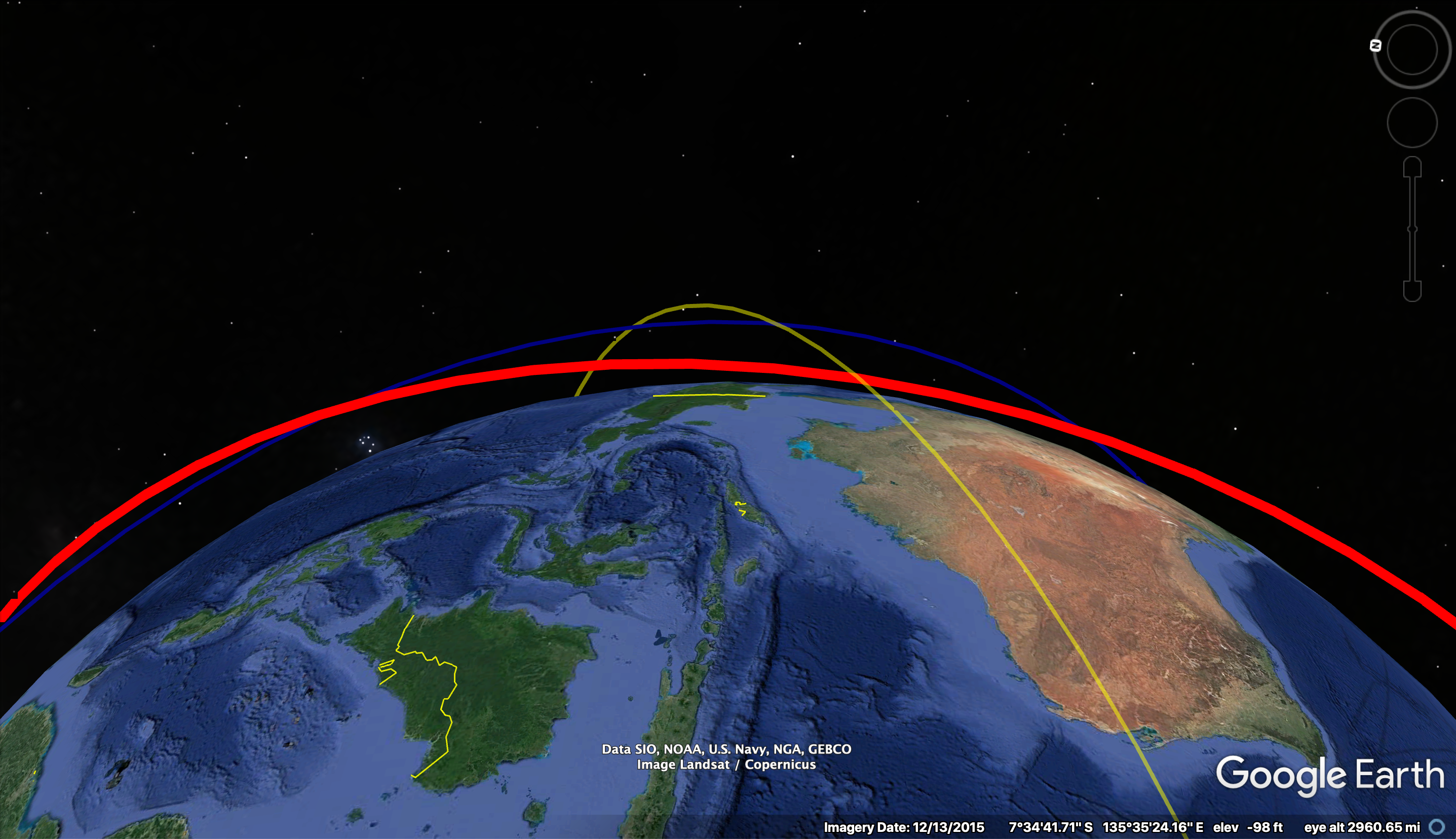 I grabbed the individual frames from their animation and filtered out the labels and background stars to make it a little clearer. Here's the animation (click on image to play the mp4): 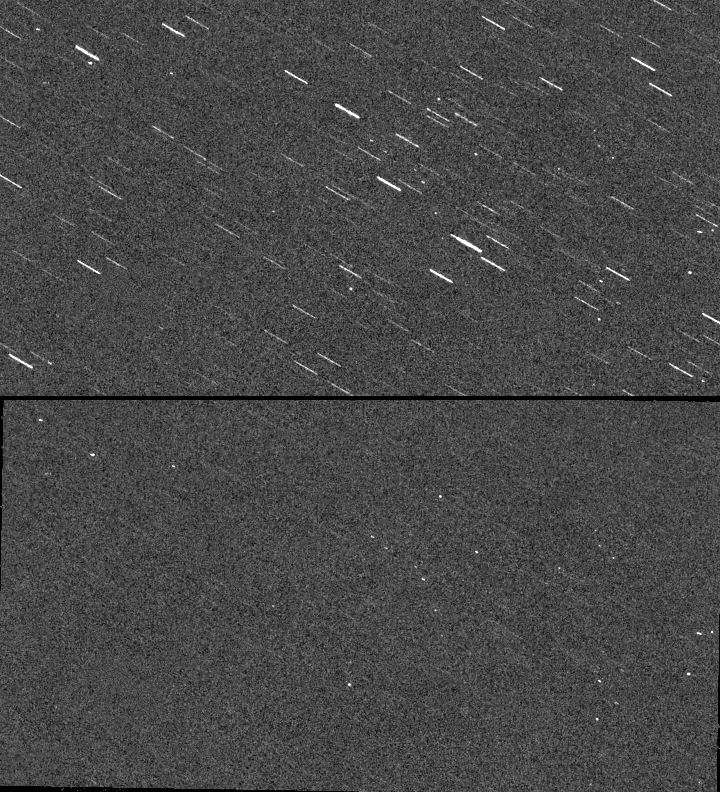 And here's a stack of all 16 images showing the debris tracks. I count ~39 separate pieces here: 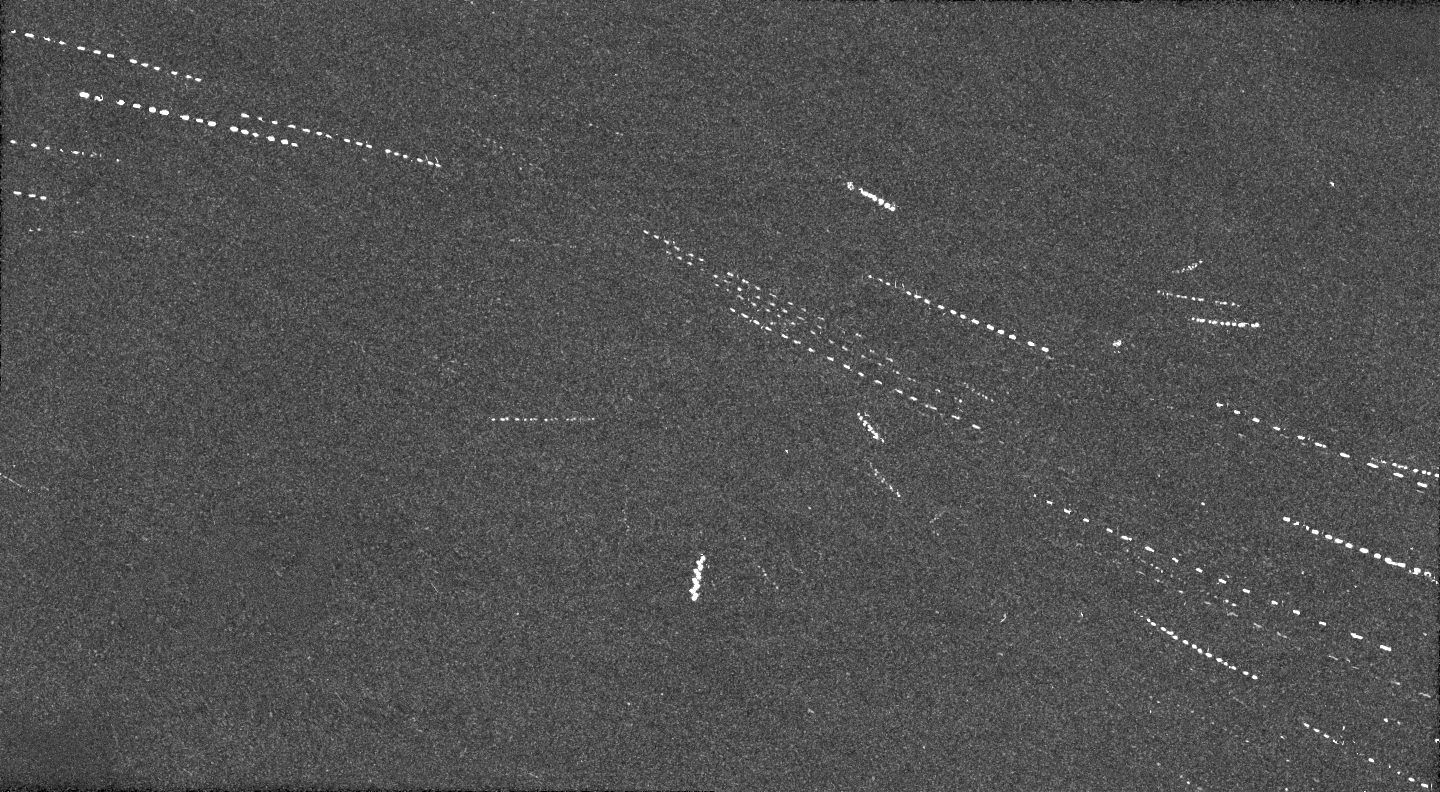 Another version of the same binned 2x2 more for better S/N.
Nov 17, 2021 11:58 PM #
eddie:
I went out at 5 AM yesterday to observe a predicted cosmos-1408 pass over Baltimore - about a day after the impact. Walked to a nearby churchyard to get a lower N horizon. Didn't pick up anything along the predicted track. Didn't really expect to see anything. It would have been difficult enough to see the relatively small in-tact sat, let alone after it was smashed into itsy-bitsy pieces. Here's the animation of a series of 30s exposures, with a median sky subtraction (mp4): 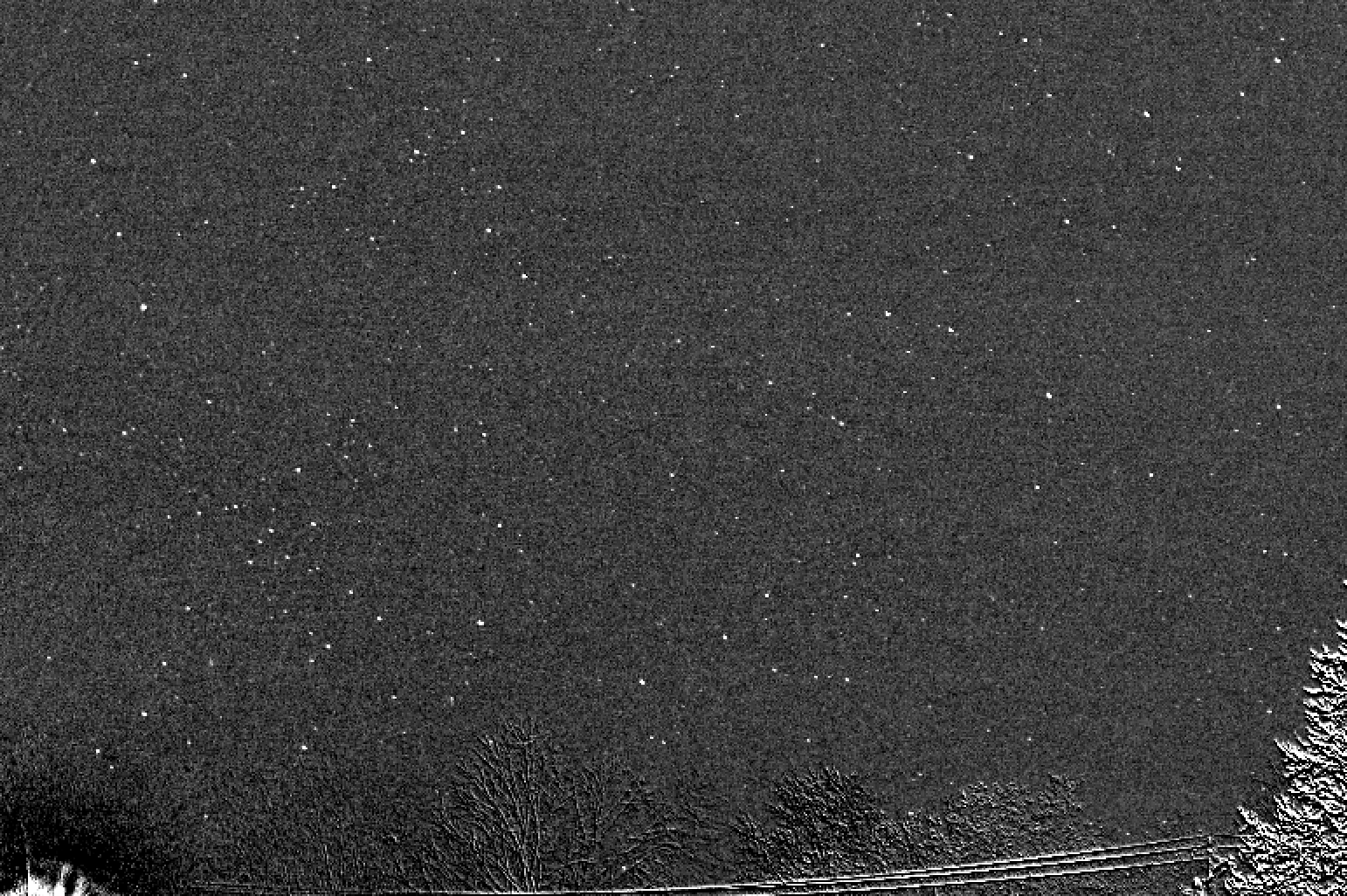 Did catch another polar orbiter moving S to N in the lower right. It didn't match any of the "brightest sats" predicts for that time on heavens-above, so I dunno what it was. Car headlights are lighting up the trees along the bottom. Surprising number of my neighbors up at 5 AM, which is closer to my normal bedtime than my wake-up time :) Red line was the predicted path as seen from the churchyard in Google Earth. Polaris and the little dipper just above the green image box: 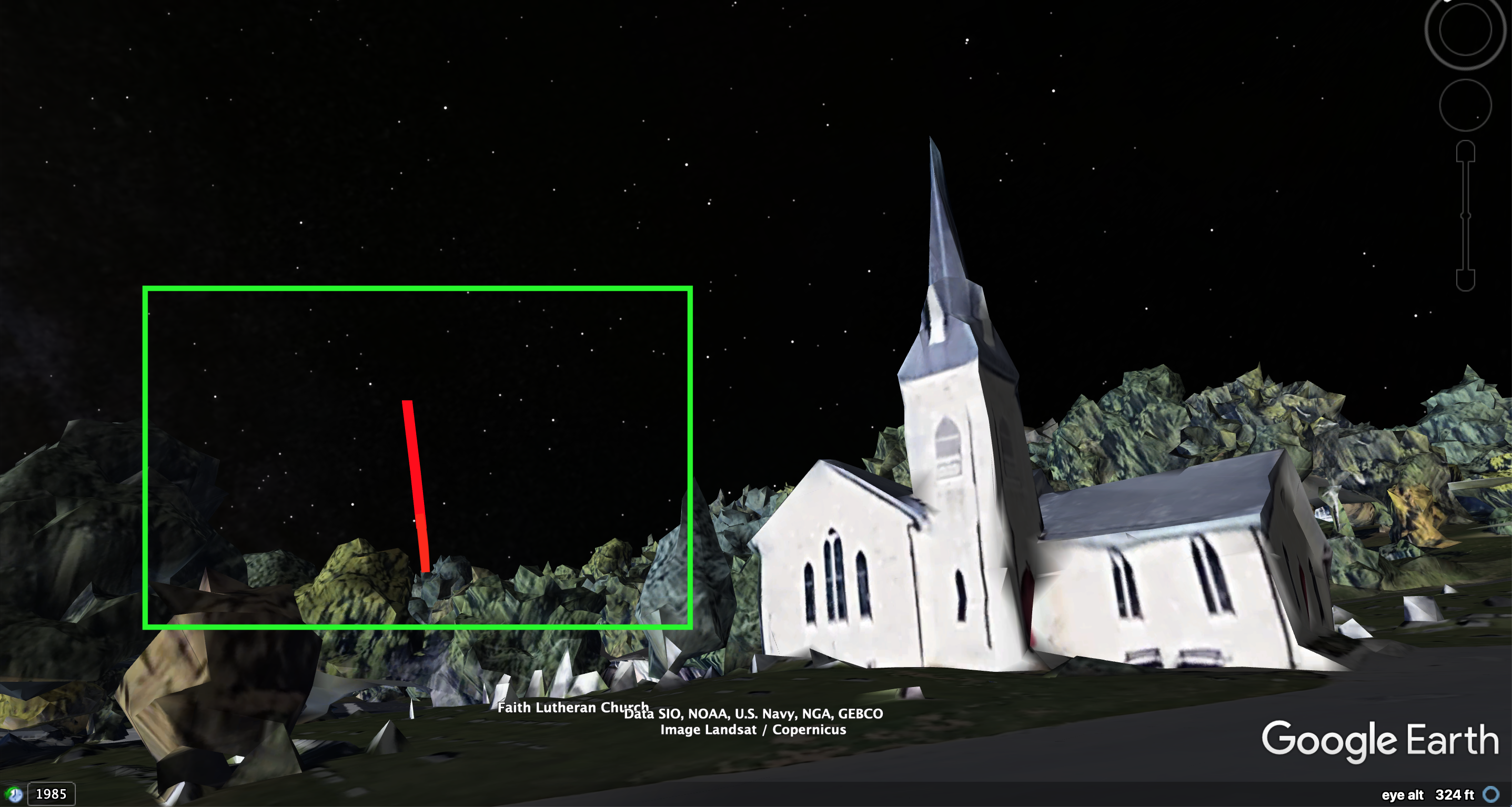