https://m.facebook.com/escarpmenttrailrun/photos/a...
Advertisement
Jan 5, 2022 8:53 PM #
cmorse:
Steve isn't the only prominent orienteer in that results list. Couldn't get a clear view of the image in the link above, this one should be clearer.
Jan 5, 2022 10:01 PM #
coach:
I think I recognize those names in 14th and 19th.....always wanted to run that race, but never had the inclination to travel that far.
Jan 5, 2022 11:05 PM #
peggyd:
Coach, same! Also, always wondered if I had the ability to do it. Self-doubt and a long way to travel dissuaded me.
Didn't Eric W win this race a whole bunch of times? Orienteers seem to have had a good record there.
Jan 6, 2022 12:08 AM #
EricW:
Ahhh, memories...
https://escarpmenttrail.com/articles/history.html

In the referenced race, Georgia/GiGi Blair and Alan Lopez (64, 65) also count as orienteers.
In later races Tony and Karen Muffati had very respectable results, and I'm probably forgetting a few.

Steve's win in '81 got my attention,as well as the attention of race director Dick Vincent, who always gave orienteers great respect, and possibly breaks on his entry standards, which he had for safety reasons. He said he didn't need to worry about us.

The following year, you won't see me on the winners list, but I beat Steve's course record by 12+? minutes. Problem was that Bill Glatz (#3 behind Steve in "81) broke it by more. We were pushing each other together near the end, when I hit the the wall (one of my few times ever) and he didn't. Despite successful attempts in "84 and '87, I never got his time.

If you can do the Highlander, you can do this one. It's slightly longer than a road marathon, time-wise, but it doesn't beat you up as much. Orienteers have an advantage on the extra rocky stuff, and downhills. My advice for the uphills is don't bother trying to run the steep stuff, just hike hard at your threshold level. I did much more walking than those around me.

(I also recognize the name Tom Galvin, as a hang glider pilot who used to live in the Hudson Valley but has since moved to Colorado. I sent him a note to ask if it was him.)
Jan 8, 2022 3:32 PM #
EricW:
a more up to date link-
https://escarpmenttrail.com/bs/

I remember one year I did the O'Ringen (when it was a Monday to Friday event), flew home on Saturday, called up Fred Pilon when I got home, made plans to pick him up at 6 the next morning and off we went to the Catskills. No need to pre-register back then.

Should add Fred to the list of orienteers at the race. I'd guess he did it a dozen times or more.
Jan 8, 2022 10:43 PM #
EricW:
Peter makes an important point about the problematic date of this event, at least for orienteers competing internationally.

Despite my comment above about not beating you up like a road marathon, recovery from this is not trivial.
I regretted taking part in the '87 event, because I did not feel properly recovered for events in the following month, which included WOC.
Note '82 and '84 were non-WOC years. 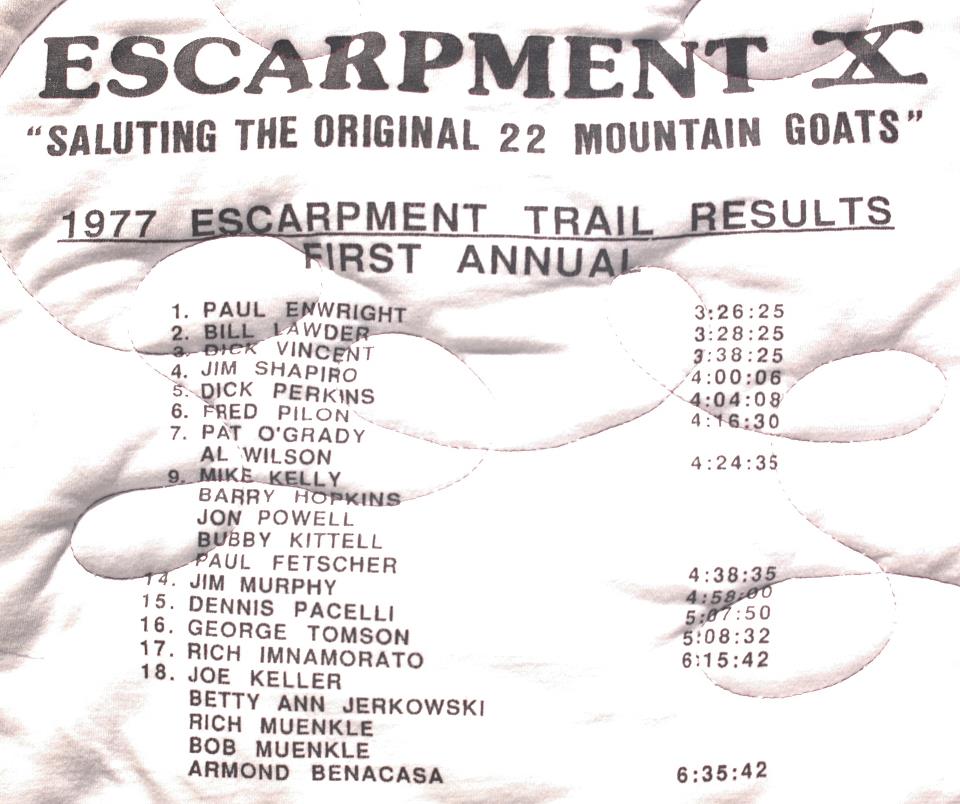 ^^First year's entrants and I came in sixth, my best placing, but not my best time. :-)
Jan 30, 2022 12:26 AM #
EricW:
Fred, good to hear from you.
Your intro claim is very believable, but my memory is not as good as your filing system.
Do you happen to have the year ( pre1981) when Charlie Trayer, a sub 2:20(?) marathoner and ultra runner, only managed about 3:30 here? I believe I heard this from Charlie himself.
Neither Steve nor I would beat him on the roads.
Jan 30, 2022 2:31 AM #
bl:
I'm impressed with the various memories at work. Steve introduced me to orienteering at Bear Brook SP in 1975. Fred and I went to a Karrimor Mt. marathon in 1980 - so far for a four day weekend. Alas, we were much younger:-). I wish I'd done a Highlander but that time of year had something else calling.

I continue to admire Steve's O meet attendance energy as is often noted in his log. I'm curious as to his silence regarding the above complimentary postings.