Jun 8, 2011 4:34 AM #
rockman:
On QI broadcast recently in Australia there was discussion of the outline of a elephant drawn as a contour on an old topo map.


"In 1924 a group of young Army officers were surveying an inaccessible part of Africa's Gold Coast. At the end of a hard day's work under the tropical sun, a single hill remained. The men decided that, using a little imagination, the small area could be artificially filled in. They drew around a picture in a magazine,
creating contours in the form of an elephant. Their improvisation was not detected and the elephant can be seen at least into the 1960s." - Lizzie , program researcher

Has anyone found similar instances of easter eggs on O maps, or is even willing to confess to creating their own?

The reason that a program like this can take 4 years to get to Australia is whole different subject for discussion.
Advertisement
Jun 8, 2011 5:54 AM #
tRicky:
Is QI back on? Dammit.
Jun 8, 2011 6:03 AM #
LOST_Richard:
Iview has it for anytime you are not working/mapping/running/cycling or otherwise clocking up AP time
Jun 8, 2011 6:52 AM #
GuyO:
On the US Military Academy's (West Point's) Lake Frederick map, by looking closely one can discern "YUCK!" in an area of patchy green.

At least that used to be the case; don't know if it's still there.
Jun 8, 2011 7:42 AM #
rockman:
are you sure it was "YUCK"?
Jun 8, 2011 9:04 AM #
Uncle JiM:
At Bush Rangers O9 (BRO9) I had a very small Ned hiding up in the rocks above the assembly area, but canned the idea, as it was a National Champs
Jun 8, 2011 10:59 AM #
jjcote:
It's actually "OH, YUCK!", and it's on Bull Pond, after the old Lake Frederick map was merged into it in 1996. Swampfox had done the fieldwork for the update, and I was doing the drafting. When I got the courses, I found that they went into an area that he had not updated, which was shown as white woods on the old map. I gave him a call, and he said that he had stopped working when he got to a stone wall, because beyond that wall it was a big tangle of multiflora rose. He said to just fill in the remaining area with random blobs of green, and when he arrived to vet the courses he'd work something out.
Jun 8, 2011 1:22 PM #
Dooby:
The map for Day 2 of the Shamrock last weekend had some extra contour type writing.
http://orienteering.ie/gadget/cgi-bin/reitti.cgi?a...
If you follow a line between Controls 9 and 17 on Course 1, the contours start to look a bit squiggly. Not too clear on the Routegadget but they spell out "here be demons".
Jun 8, 2011 2:23 PM #
tRicky:
Richard - what's an iview?

I once drew a horse on a sprint map in 'open land' colour but the real mapper covered it up with more open land.
Jun 8, 2011 11:07 PM #
mouse136:
On the Tharwa Tor map near Canberra the mapper put on the map in very very very small font the word "wombat" where he saw one when mapping.

A magnifying glass is needed to see the word.

He was swedish so seeing the wombat would have been a big thing.
Jun 9, 2011 1:37 AM #
AZ:
I once ran in Wales where it is hard to know what's real - like when we found a hotel in a place called Cwmbran we had to Google it to believe it (aren't more vowels required??).

Anyway, we ran on the Parc Penallta map which we were told has contours in the shape of a pony. I *thought* they were talking of an easter egg until I ran up the snout, along the mane, and dropped between the hind legs to punch. 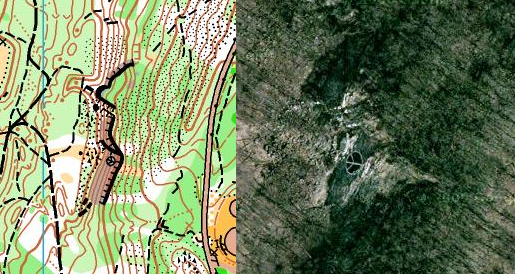 I'm glad we know that you're talking about orienteering.