Aug 26, 2019 10:25 PM #
SherlockHolmes:
After running in this weekends NEOOC meet at Cuyahoga Valley National Park I'm curious how many sites administered by the US National Park Service are used for orienteering. Those I can think of include:

Any others?
Advertisement
Aug 26, 2019 10:57 PM #
edwarddes:
One of the Boston Sprint Camp days in 2017 was on Fiske Hill which is part of Minute Man National Park
Aug 26, 2019 11:32 PM #
furlong47:
Greenbelt Park
Delaware Water Gap (several DVOA maps)
Hopewell Furnace National Historic Site is on some of the French Creek maps
Valley Forge has maps, but hasn't been used recently due to access issues
Aug 27, 2019 1:07 AM #
mikeminium:
Florissant Fossil Beds National Monument (CO)
Mammoth Cave NP (KY)
I don't think that either has been used in several years, probably a couple decades for Mammoth Cave NP.
Aug 27, 2019 1:40 AM #
BrianJohnston:
I did the permanent O course that Orienteering Louisville has at the Hoosier National Forest.
Aug 27, 2019 1:59 AM #
o-maps:
I think there have been many O events that have been held in many national forests in the USA. But the original post specifically says National Park Service (which is in the Department of the Interior), who administer national parks, national monuments, national historic sites, etc. But NOT national forests, which are administered by a totally different branch of government, the Department of Agriculture. And I believe it has generally been much more difficult to get permission for NPS properties than USDA properties, which I suspect is the point of the original poster. Or did I misunderstand?
Aug 27, 2019 2:33 AM #
edwarddes:
I think Forest Service land is relatively easy to get permission for. National Parks take a lot of bureaucratic process to make work.
When I talked to Minute Man they never said no to having us at the park, but they did want to make sure we didn't interfere with their main mission which was the victors there for the historic sites. We ended up in a lesser used area of the park from what we initially requested, but everyone was happy with the outcome and they seemed open to having us back.
I think we only paid a $50 permit application fee. They wanted to charge us an hourly fee to have a ranger on site, but our small scale, and good relations with the staff rangers ended up with having a ranger stop by at the start and end of the event to check on us and not feeling like he had to be there the entire event.

I would encourage clubs to not be scared of working with National Parks, but be willing to accept the limitations and fees that will be associated with using any high usage area.
Aug 27, 2019 2:37 AM #
SherlockHolmes:
O-maps is correct. Just looking for the 420 NPS sites not BLM or Forest Service sites. Looks like my travel plans are filling rapidly.
Aug 27, 2019 3:16 AM #
GuyO:
Some national non-parks are administered by NFS/USDA...
Newberry Volcanic NM (Deschutes NF), Bend, OR
Hells Canyon NRA (Wallowa-Whitman NF), OR/ID
Aug 27, 2019 1:28 PM #
David_Waller:
BOK is about to be approved for a February 2020 event at Cape Lookout National Seashore.
Aug 27, 2019 1:53 PM #
SherlockHolmes:
David_Waller that sounds very interesting. Will the event be on the islands where you need to take a ferry to get there? It's been many years since I've been to Cape Lookout but I remember it being long and narrow. Sprint event on the beach or regular event? May be worth the trip out from the Midwest.
Aug 27, 2019 7:01 PM #
dofishman:
We have had several events at the Arch during one of the park services events.
Aug 27, 2019 7:43 PM #
SherlockHolmes:
dofishman...I'm sorry to have missed those. Please let me know when you have another event at the Arch. I wonder if the NPS will still allow you to have events there now that they have changed it from a National Monument to a National Park.
Aug 28, 2019 1:04 AM #
smittyo:
Terraloco has done a few rogaine events at Joshua Tree NP. They weren't allowed to put out control markers so used a different punching system.
Sep 5, 2019 4:35 AM #
DWildfogel:
The Golden Gate National Recreation Area is managed by the NPS and, according to Wikipedia, "is the most visited unit of the National Park system in the United States". We have had orienteering events at several sites within GGNRA, e.g., The Presidio of San Francisco, Sutro Heights, Lands End, Fort Mason. This year's Sprint San Francisco, Dec 7 & 8, will likely use a couple of the aforementioned places. Next year's Cal O-Fest 2020 will have one day at The Presidio.
Sep 5, 2019 7:38 PM #
yurets:
Incidentally, Kings Mountain National Military Park is the venue for the upcoming Bubba Goat, the most sacred event in the Deep South
https://carolina-ok.org/event/2019-bubba-goat-orie...
PS: I've heard they would be using a lidar-based map. Just wow.
Sep 30, 2019 5:36 PM #
David_Waller:
@SherlockHolmes: BOK event at Cape Lookout has been approved for Saturday, February 1. Unless you know someone with a boat, you would need to catch the ferry out there. Easiest is the passenger ferry from Beaufort. Details about the event should be on the BOK website a few weeks before it happens. We're hoping to offer white through red point-to-point courses, but still need to negotiate control sites with park management. Our 'in' for that venue was a JROTC unit in Carteret Co. So the event will definitely have beginner courses, and we will push to get long difficult courses as well. Map will be based on lidar + imagery, with not much field checking.

This link shows a snippet:

https://drive.google.com/file/d/1B_ajJhbRVacmHuXgl...
Oct 1, 2019 12:25 AM #
jjcote:
Nancy and I are in. Lighthouse!
Oct 1, 2019 4:58 PM #
SherlockHolmes:
David_Waller: Thanks for the update. Will try to make it - already planned to go to GA for the Navigator Cup as my early 2020 trip but may be able to add another.
Oct 2, 2019 7:00 PM #
David_Waller:
Well, shoot. If people are coming from out of state, we'll also try to do something on Sunday to make the trip worth it. Maybe something in the Piedmont if people are flying out of RDU; or something near the coast if they're flying out of Wilmington. If it happens, a Sunday event might be informal (e.g., manual punch) and/or illicit (e.g., w/o permission). If it's illicit, don't expect to see a web announcement, and contact me for details.
Oct 2, 2019 10:06 PM #
SherlockHolmes:
It would be RDU for us. I'll contact you as it gets closer.
Oct 3, 2019 1:54 AM #
jjcote:
I've got friends to visit in Wilmington on Sunday.
Oct 14, 2019 8:32 PM #
Platterpus:
I did put on that Meet (12 Hour Rogaine) for OLOU at Mammoth Cave NP and I had an advantage in that I never actually knew it would be difficult to obtain permission. I simply called the Park Ranger and he gave us permission with the condition that we could NOT have the HQ inside the Park. So we set up at a Private campground that was on the NP property line. I think the only reason we did not hold another event there was that it is a bit of a drive to get down there for me. Maybe we should try again :)
Oct 14, 2019 8:40 PM #
Platterpus:
@David_Waller: I hate to jinx myself by committing to this meet but I SO much want to make this.
Feb 2, 2020 8:33 PM #
SherlockHolmes:
Great event at Cape Lookout National Seashore yesterday. David did an excellent job arranging ferry transportation to the island in addition to all the other duties as meet director. Thanks for the opportunity to orienteer in another NPS site.
Feb 3, 2020 2:14 PM #
BorisGr:
How cool! Is there a map from the event somewhere online?
Feb 3, 2020 3:22 PM #
yurets:
It's a bit strange to see a fixation on "National Parks/Sites", so people would go across the country to a meet just because its site is managed by some federal agency. But whatever it takes.
BTW, the 2nd day on Sunday, in a state park. was in fact so much nicer, with terrain being top-notch
Feb 3, 2020 4:28 PM #
jjcote:
I think the issue is that there are a lot of National Parks, many of which have some wonderful terrain, but our access has been limited. As we have events in these areas, favorable reports from the rangers may open up opportunity in the more desirable parks. (I was one of the people who traveled the furthest to get to that meet, but it wasn't because it was a National Seashore site, there were several reasons why a trip to that part of North Carolina was a good thing on this particular weekend, and they all worked out great.)

I can post a scan of my map from NC when I get home tonight. The meet director said that he really wasn't given any restrictions form the park staff when setting the courses, which is terrific -- I can imagine some circumstances where there would be so many out of bounds areas that it would be unworkable.
Feb 3, 2020 5:06 PM #
yurets:
@JJ, I see. Then another opportunity to do orienteering on a brand new LIDAR-based King Mt. Military Park map is in March.
Feb 3, 2020 5:08 PM #
David_Waller:
Thanks for the positive feedback, Bruce -- so glad that you guys could make it over for the event. I completely agree with yurets that the terrain at Ft. Macon was much more interesting than at Lookout -- but both events were special for different reasons. Next year, we'll try to get over to Shackleford Banks (wild horses). Extremely tentatively, we're thinking about doing Shackleford on Saturday and Carolina Beach state park (Wilmington) on Sunday. Both will be new maps.

There were a couple of things that helped our request to use the park. Probably most helpful was that the superintendent was familiar with the sport of orienteering and is an exceptionally approachable and responsive official. He made things really easy for us. And I think that he was less constrained with us being out there in the off-season. Second, the petition itself was filed by a local friend of BOK who is the county NJROTC commander. The event was originally pitched as an educational/training experience for JROTC cadets, with some expert orienteers to help with the training. Too bad (sincerely) that none of the local cadets took advantage of the opportunity.

I'll get results and photos on the BOK site by mid-week, and (possibly) results on AP, too.
Feb 3, 2020 11:53 PM #
mikeminium:
Glad to hear the event went well, sorry I couldn't get there for it! When I worked with youth in NC, we frequently took the kids to Ft Macon, and I would have enjoyed visiting again and O'ing there, as well as at Cape Lookout. Too bad that none of teh Carteret County cadets made it out...
Feb 4, 2020 12:12 AM #
SherlockHolmes:
I put a copy of the Green Cape Lookout map on the Chicago Orienteering facebook page. As far as the "fixation" on orienteering at NPS sites, I don't disparage anyone their reasons for attending any event. As for myself, I am working on visiting all 419 NPS sites and I enjoy orienteering - so any time I have the opportunity to combine the two, I'm in. This trip I was able to visit 5 NPS sites and orienteer - all in 4 days - so well worth it. I wish I could have stayed for the Fort Macon event.
Feb 4, 2020 12:44 AM #
jjcote:
And Red right here: 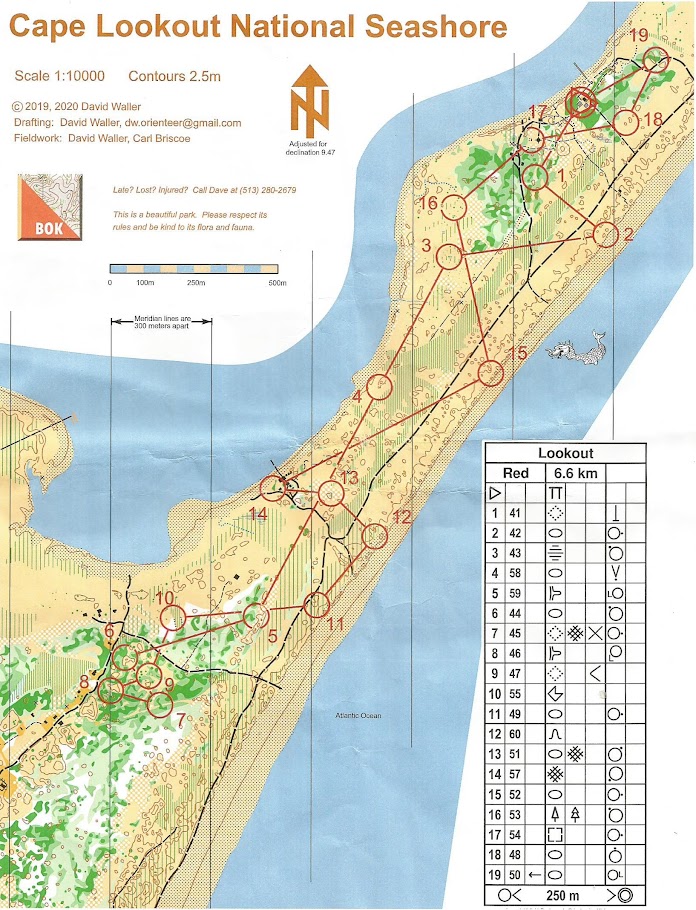 Feb 4, 2020 7:27 PM #
peggyd:
That looks super fun!
Feb 13, 2020 9:41 PM #
SherlockHolmes:
In case anyone needs another reason to attend the US Junior Nationals on Whidbey Island, WA: The meet will be held at Fort Casey State Park and Fort Ebey State Park which are both within the Ebey's Landing National Historical Reserve, another NPS site.