Dec 12, 2019 9:06 PM #
gordhun:
I'm looking for good advice on how to superimpose the military grid reference system on a few existing orienteering maps.
Do any of you have any suggestions on where to find it, how to do it?
My maps are in OCAD but I can make Open Orienteering Mapper versions if necessary if that helps.
Advertisement
Dec 12, 2019 9:21 PM #
Mr Wonderful:
Quick and dirty option: https://caltopo.com (free for doing this type of work, or so far everything I've needed it to do) can generate a UTM or USNG grid, which you could then print to jpg, import and reference, trace the grid and retype the numbers where needed, if that works for your quantity of projects.

Sample output of print to jpeg from caltopo w/ USNG: 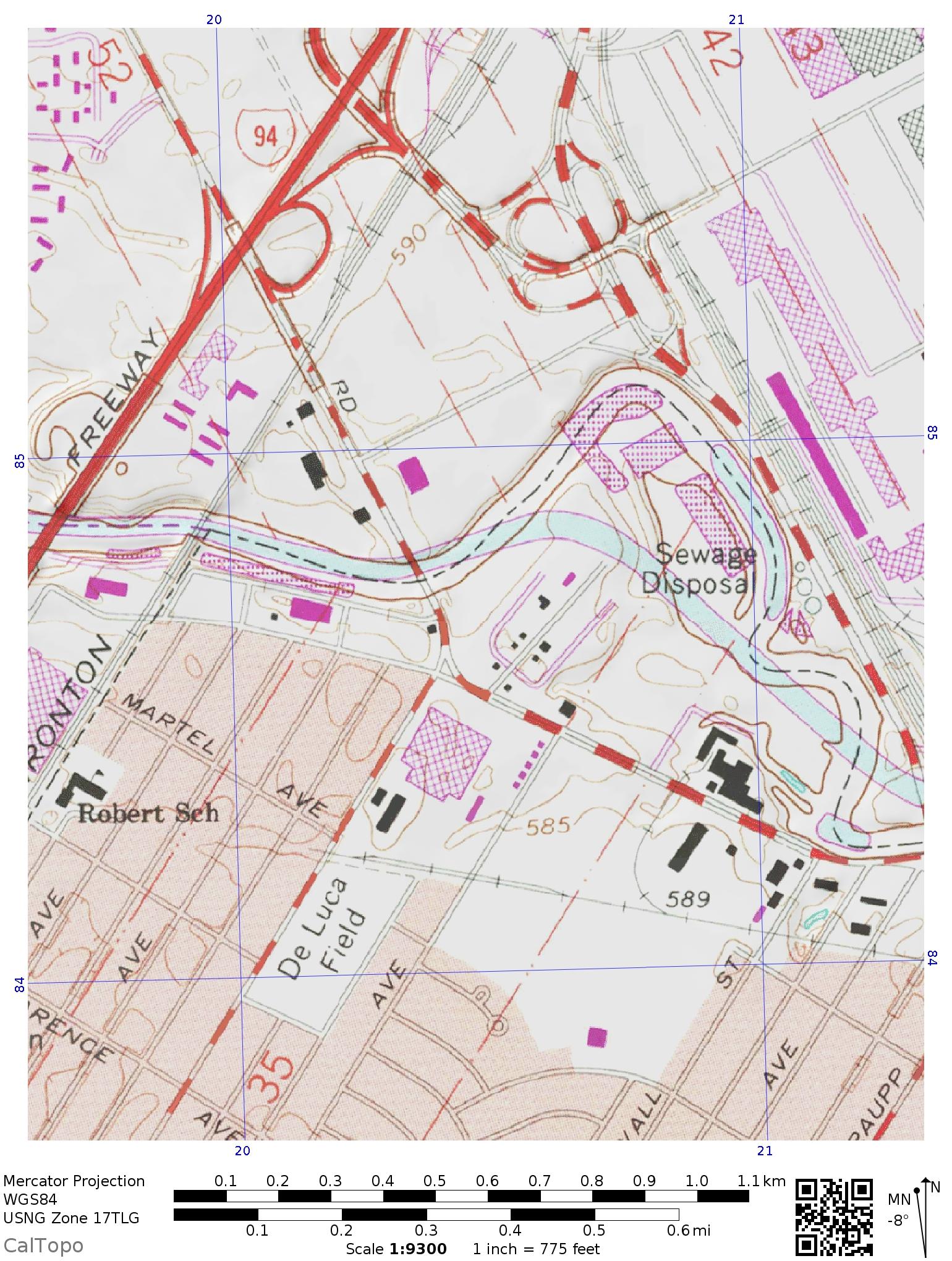 So if you print a UTM grid on your O map, for most practical purposes you can use that as the MGRS grid. For the MGRS coordinate, you only pay attention to the last 5 digits of the easting and northing UTM coordinates.

Hope this helps.
Dec 12, 2019 11:09 PM #
gordhun:
Thanks gents.
Very helpful.
No I'm not having to teach the MGRS system.
Here in Florida we have a very successful JROTC orienteering program. The program is mostly populated by the Navy JROTC programs. The Army schools have not picked up. I've been told two reasons for that 1) they already have a very busy competitive program. No argument there. and 2) our orienteering is not related to the land navigation they are charged with teaching.
For two of the army schools that have taken up orienteering one has dropped their drill team to make room for orienteering. The other has dropped their Raider team to make room.
So can I do something for the other schools? I'm thinking why not tailor the orienteering map to their navigation tool which uses the military grid reference system. Plot their controls military style and then off they go with an orienteering map and they'll be navigating orienteering style.
Dec 13, 2019 3:06 AM #
cmpbllv:
Interesting idea. Could be confusing to distinguish between grid north and magnetic north lines on the same map. Not sure they’re compatible, depending on your declination.

I always used to flip back and forth between my military maps of West Point and the O maps rather than trying to combine them. It helped me appreciate the change in scale, and the need to work from distinct, major features.
Dec 13, 2019 6:49 AM #
Terje Mathisen:
I'll just repeat the suggestion about using the normal UTM base reference grid: You can (at least in OCAD) do a Map - Generate Grid, with or without labels, on horizontal and vertical km boundaries. This will be identical to the military grid since they more or less invented it.

At least here in Norway all our 1:50k maps have such a grid, and then a label on the side telling what the offset is between grid north, true north and magnetic north. These maps were first produced after WWII with some financial support from our NATO partners, primarily the US.

For an orienteering map I would create that military grid (with manual labels) using one of the north line colors (say blue), before rotating the map to correct for grid to mag north declination, and then finally do the normal vertical only magnetic north lines in the other color (i.e. black).

This way you can simply hide the blue grid when printing for a normal event and show them when targeted to your JROTC events.
Dec 13, 2019 7:08 AM #
JLaughlin:
Terje's solution is the best. Since mgrs is just a modification of utm it works great - you'll just have to adjust the labels manually.

10 minutes of work. (Including the labels)
Dec 13, 2019 1:25 PM #
jjcote:
I wouldn't worry about the offset. What difference would it make to anyone?
Dec 13, 2019 2:51 PM #
cmpbllv:
Well, if the goal is to teach both military-style navigation skills and orienteering skills, in areas with significant declination (most extreme at the coasts - ours is 12 degrees around NEOC-land, think it was about 17 in COC-land), you really need both lines.

The BSA Scout Handbook addresses this by just using a ruler to extend the declination line. But if you're first plotting controls using MGRS, then want to complete a course using orienteering-style folding / thumbing / rough compass, you might want more than that one line.

The Army way was to calculate declination every time you measured an azimuth between two points on your map, then use that converted declination as the compass bearing for straight-line navigation (usually over fairly long distances by orienteering standards). There's a military-design protractor with cut-outs to plot MGRS on 1:25K and 1:50K and measure azimuths in degrees and mils.

Blending the two skills is a neat idea, but military land nav is designed for smaller-scale maps, straight-line navigation on azimuth and pace count, using MGRS and declination conversion.

O involves a different, somewhat overlapping skill set, as so many in the community have lamented when new-to-O people with military experience show up and sign up for the longest, most challenging course. Gord, I'll be interested to hear how this goes and what lessons we can glean that might be useful for those military-experienced navigators interested in trying orienteering.