Rowing. Started a workout and really wasn't feeling it. That doesn't happen very often, so when it does, I assume my brain and body need a break.

Their gym teacher had been to one of our events and was pretty enthusiastic. He had shown them some videos ahead of time, including those that showed off orienteering as a competitive sport, so they had a basic idea of what they were getting into.

I had one helper (Lee Brown) along with Eddie the gym teacher. Lee helped with setup, control pickup, and monitoring the far areas of the course to make sure no one strayed too far.

I started with a schpiel about orienteering and then got into map symbols. We pointed out objects mapped with various symbols and colors and then talked about the mechanics of finding a control and punching. (10-15 minutes)

We then talked about the compass and orienteering the map and facing your direction of travel with the oriented map. (5-10 minutes)

After that I handed out mini-maps, and we looked at those, identifying the direction to the first control and talking about scale and how far away objects on the map actually were. (5 minutes)

We then all together walked around the course on the mini map, identifying mapped objects that we passed and talking about control codes and descriptions. At each control they needed to re-orient the map and face in the direction of the next control. (10 minutes)

I then asked the teacher to line them up, talked to them about staggered versus mass starts, gave some safety rules (don't swim across the pond or run across railroad tracks, etc.). I then gave each one an SI and sent them off. The teacher made sure they punched the start. Every person who went out finished the course, with the exception of two who skipped one control while trying to chase down classmates. The fastest time was a very impressive 7:18, and the slowest about a half hour. 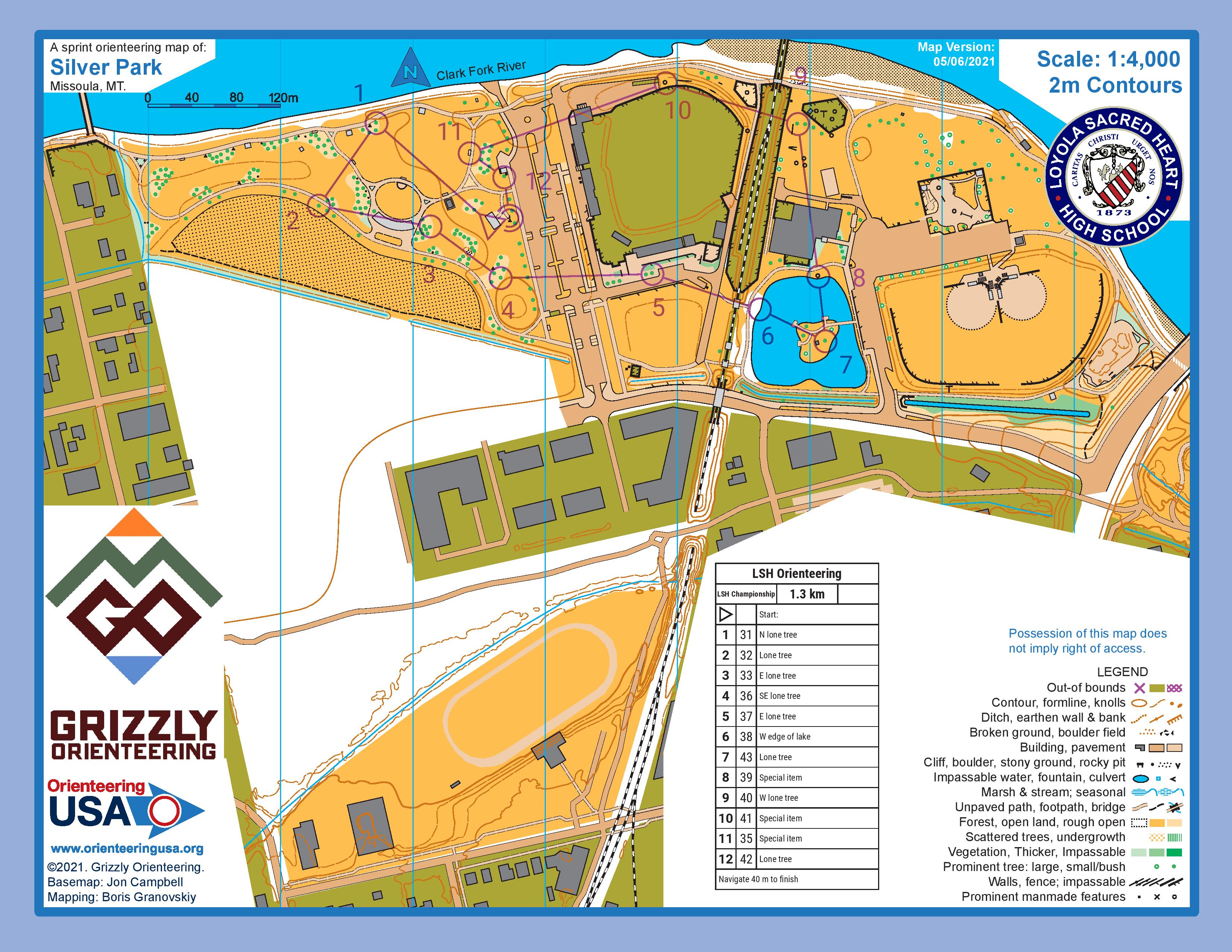 Everyone was back in time for a closing discussion of route choice, mistakes, helpful terrain features, etc. I also talked a bit about upcoming GrizO events and what competitive orienteering looked like (WOC, World Games, etc.) Oh, and there was candy, obviously.

I would say that 80% of the kids were very engaged, and the rest were at least somewhat engaged. The senior class really impressed me with their energy levels, as I expected second-term seniors to be too cool to run around a park. All in all, a great group of kids. If one of them shows up to a GrizO event at some point, I'll call it a win.

A huge thank-you to Jon Campbell for remotely making an excellent sprint map that we will be using for future events. And thanks to Garth Flint, Eddie Stack, Lee Brown, and Alli for making this happen. I think it was a good model for an orienteering clinic for a group of this age.
C • That 7
4 PM