Day 1 Middle WRE. Ok run except for early losing chunks of time on early controls no.5, 6, 7 all in a row. Then got caught 4 min by Victor Mansner and ran with him through till no.19 where I ended way right of the control. Last few were ok. Prob lost 4 min altogether. Finished in 20th, and picking up 4 places to 20th overall. Field very bunched.
Day 1 Course 1 - Splits

Prologue. La Trobe University Bendigo. Overall too slow and hesitant. Lost a minute on the last of the bush controls no. 7 ending up way too far right. Also lost 15 secs on a dead end after the spectator controls going to no.18. A few other 5 sec route choice errors. Finished well down, 4 min behind the leaders in 24th.
Prologue Course 1 - Splits

Final Summer Series of the season at Macquarie University. The inside of my bad ankle is still sore but overall improved a lot the last couple of days. Clean run, slightly longer route choice than others. Got all controls but no.5 in 44.42, Steve Ryan got all in 41.40, Glenn Horrocks-43.
Mars Creek - Splits

Started off ok and catching a few runners early including Brooner 3 min. who had stuffed no.1. Lost 20 secs on no.3 being too far north then sprained ankle on the approach to no.6. Had to sit down just after for about 30 secs then tried to go again but realised my tape had ripped right through. I then pulled off my other shoe and unstrapped my right ankle and retaped by bad left. After that slowed right up to ensure I didn't go over again. Matt Hill caught me and pretty much took it very easy running behind a pack till the end. I was able to keep up as they weren't very clean. Big problem now is will my ankle be ready for Easter. 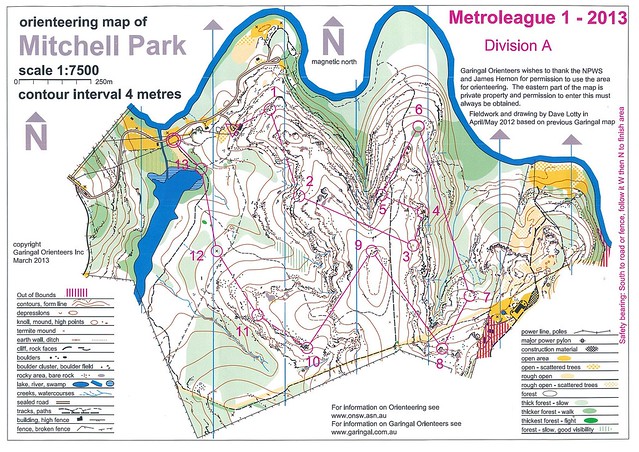