AWOC Championships. Always an adventure. Last year it was the weather with lightning and a heavy rain dump mid course. This year it was a long tough trip with few tracks and lots of rock, in perfect weather. We joked before the event about taking two hours and it wasn't far off. Reasons for the long time were first the state of the terrain, second some "errors" and third fitness.
Control 2 error - making a few assumptions about seeing the top of the ridge. It was false summit. Worked it out but lost six minutes.
Control 4 error - just a little off, a couple of minutes.
Control 8 error - maybe ten minutes. Walked past the control twice within metres (actually within a metre) and didn't see it. It had fallen into a cleft between rocks. And I wouldn't map a bare rock that small either. Totally lost confidence and went in a random hunt at that stage. Julie (who I had caught the previous control) spotted it and that saved me. There were multiple others wandering so I pulled the stick with the flag out of the cleft and put it on top of the "bare rock".
After that Julie and I sort of shadowed each other, navigating independently and losing sight of the other, but generally arriving at controls at the same time. I think she was happy with this outcome.
The main reason for slow speed though was the state of the terrain. Lots of knee high plants that obscured the fallen timber on the ground and the holes. Running was risky, so took it easy.
All in all, a great day out that justified the six hours total driving. A very different granite experience to Korong.

Last bush event for the year, in a year with precious few chances to orienteer, so decided to preserve the experience on DOMA. May next year will offer more opportunity for Victorian orienteers. Aim today was to finish off the Dunolly map. Managed that, until I reached the end of the lidar and discovered right on the boundary the start of a new area of mining detail (see photos). Do I attempt to map it with rough 10 metre contours and gps? Back home, after drafting the final version of the days field work, I went looking at the original lidar files, and discovered I have data for much of the "new" area. So the map isn't finished. 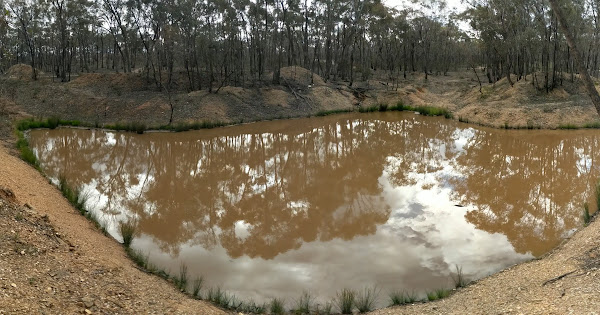 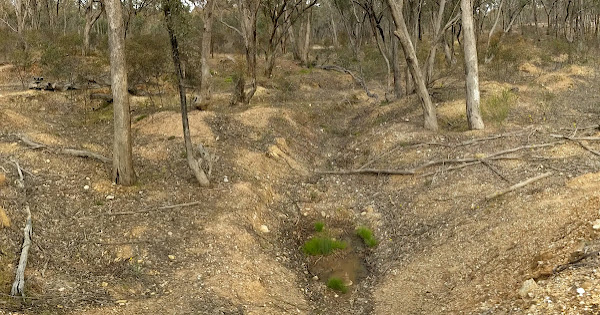