LoCO FIT breakfast run -- still "unofficial" since Coach Erin can't join us, but we had about 14 of the regulars today.

We met at Panera and headed west. Most did a loop; I wasn't sure if I could do the full loop, so I did an out and back on the Mayhoffer-Singletree trail.

Around 3pm yesterday, the wind blew in a ton of smoke from the Fort Collins-area fires -- it was a very eerie, apocalyptic look. This morning, there was a faint smoke smell, but thankfully the air looked clear (I could see the mountains).

Photo from yesterday afternoon from someone in my town:

Photo from this morning: 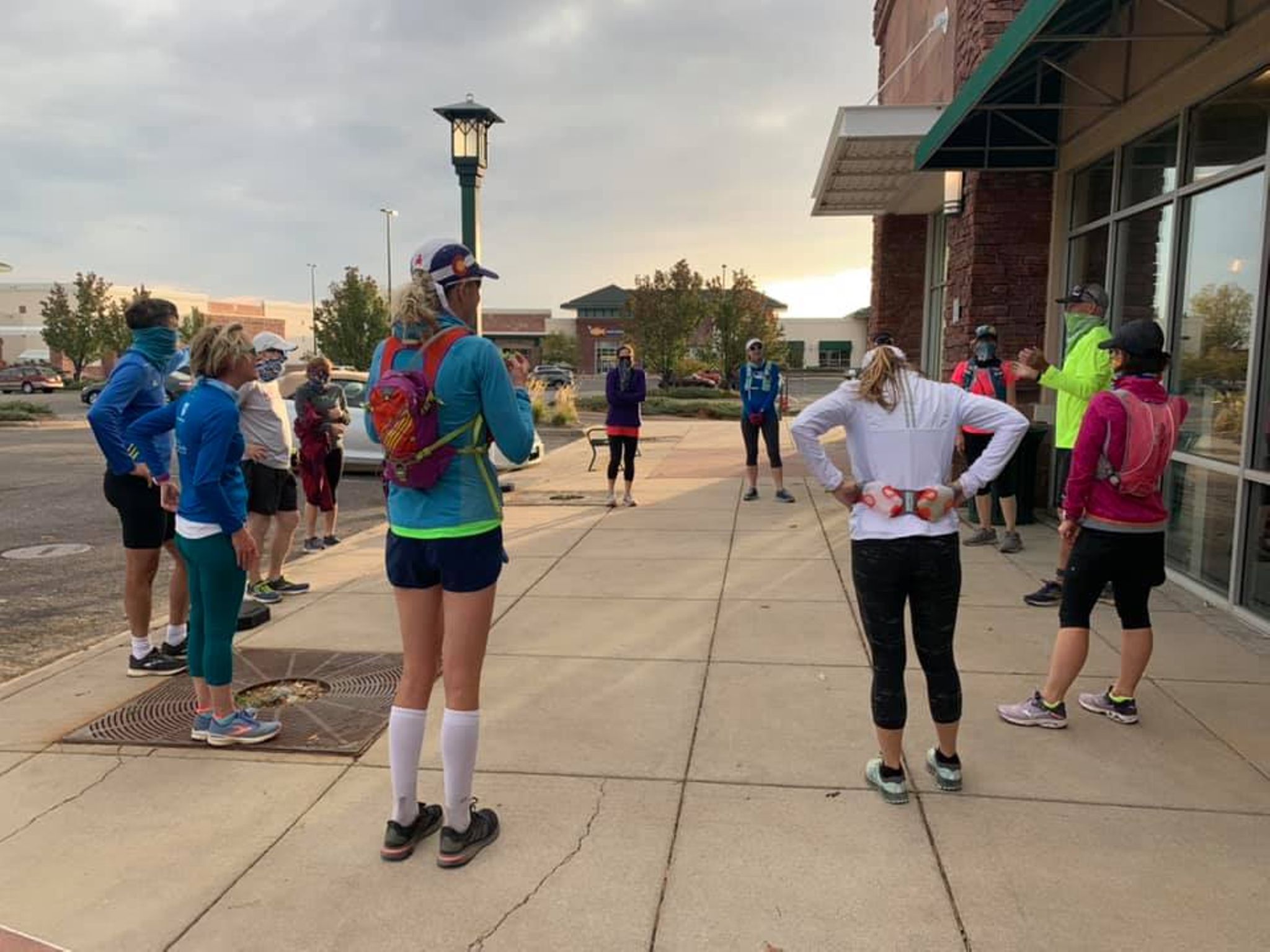 With some of my new free time...I'll be volunteering once a week with "Carryout Caravan": grocery shopping for home-bound seniors (something I did previously back in 2003-2004 -- it's fun). I started today at the King Soopers in Boulder / Table Mesa.

They had free donuts...double-chocolate...taunting me each time I came back to the staging area to get a new shopping list. I had to have one.

I ran into Jen Lavely (we recognized each other even with masks on), and another old friend from when I lived in Boulder a million years ago spotted me in the parking lot (a typically eccentric Boulder native).

And then I got a flu shot, did some paperwork at home, and met two former co-workers for dinner. Hearing about the latest work-related nonsense from *just this week* makes me so glad to be out of there.

I was feeling sore all over and had to *force* myself to ride today. ("You drove all the way out here...you paid for a hotel room...18 Road is one of the classic Fruita trail systems"...etc.).

Unlike yesterday's ride, this area was packed with people -- RVs and campers everywhere. The setup is kind of like a ski resort: you ride 1.75 miles up a dirt road (or get shuttled up, if you have a friend with a truck), and then pick a trail to cruise back down the flow-y, curve-y singletrack. Repeat.

I did the Kessel Run trail, and then the PBR trail.

Then lunch at the best place in town -- Hot Tomato Pizzeria.

I was happy to realize that my only injury of the three-day trip was a calf-vs.-chain ring cut as I was trying to maneuver my bike through the heavy hotel exit door this morning.

I wasn't sure what to expect of my $47-per-night hotel room -- especially after seeing signs behind the front desk about not renting rooms to Mesa County residents (the local county -- is that a prostitution thing?) -- but it was perfectly clean and well maintained (though spartan). My room's window was about 100 meters from I-70, but I was too physically exhausted last night for the noise to keep me awake.

I wanted a solid half-day ride that would let me get in lots of miles with nice scenery and minimal technical features (since I suck at technical features). This route, recommended by someone in a local MTB group on Facebook, turned out to be perfect: Western Rim Trail (including parts of the Rabbit Valley 2 trail and the Kokopelli trail into Utah).

I had to push my bike through some deep sand near the beginning of the loop, on the way in and out; it felt like a mile of slogging but was probably only a half or quarter mile.

There were also some rocky spots, steep hills, and exposed ledges where I had to hop off -- but not so many times that it felt demoralizing.

I had a minor epic where I followed some tracks off the main trail and ended up walking my bike along a narrow ledge at the top of a cliff. ("Do people actually ride this?!?" No...no they do not.) I eventually realized I was definitely NOT in the right place, but it was not obvious how to get off the ledge and back up to the main trail on the upper level. I was...not really scared but very concerned. After (very carefully) walking back and forth along the ledge a few times, I eventually found a place where I could scramble back up -- but it wasn't easy to do in my stiff bike shoes, pulling my bike up behind me. Holy sh*t.

From that point, the trail hugged the edge of the canyon / cliff for several miles -- sometimes at a comfortable distance from the edge, sometimes not. Since I was feeling spooked, I walked whenever the edge felt too close.

I stopped A LOT -- for snacks, photos, and checking my map. The ride was five hours total elapsed time, 3:30 of actual moving time -- and I saw ONE other person the entire time (a dirt biker at the half-way point).

I felt very worked over by the end -- sore hands and shoulders / arms, in addition to sore legs; I forgot to put sunscreen on my arms (oops...); my chain was caked in dust and making awful grinding noises for the last ~five miles; and I ran out of water about 1.5 miles away from the finish. But it was a great excursion that I'd love to do again sometime with friends.

Looking towards the Colorado River from the top of the rim / mesa: 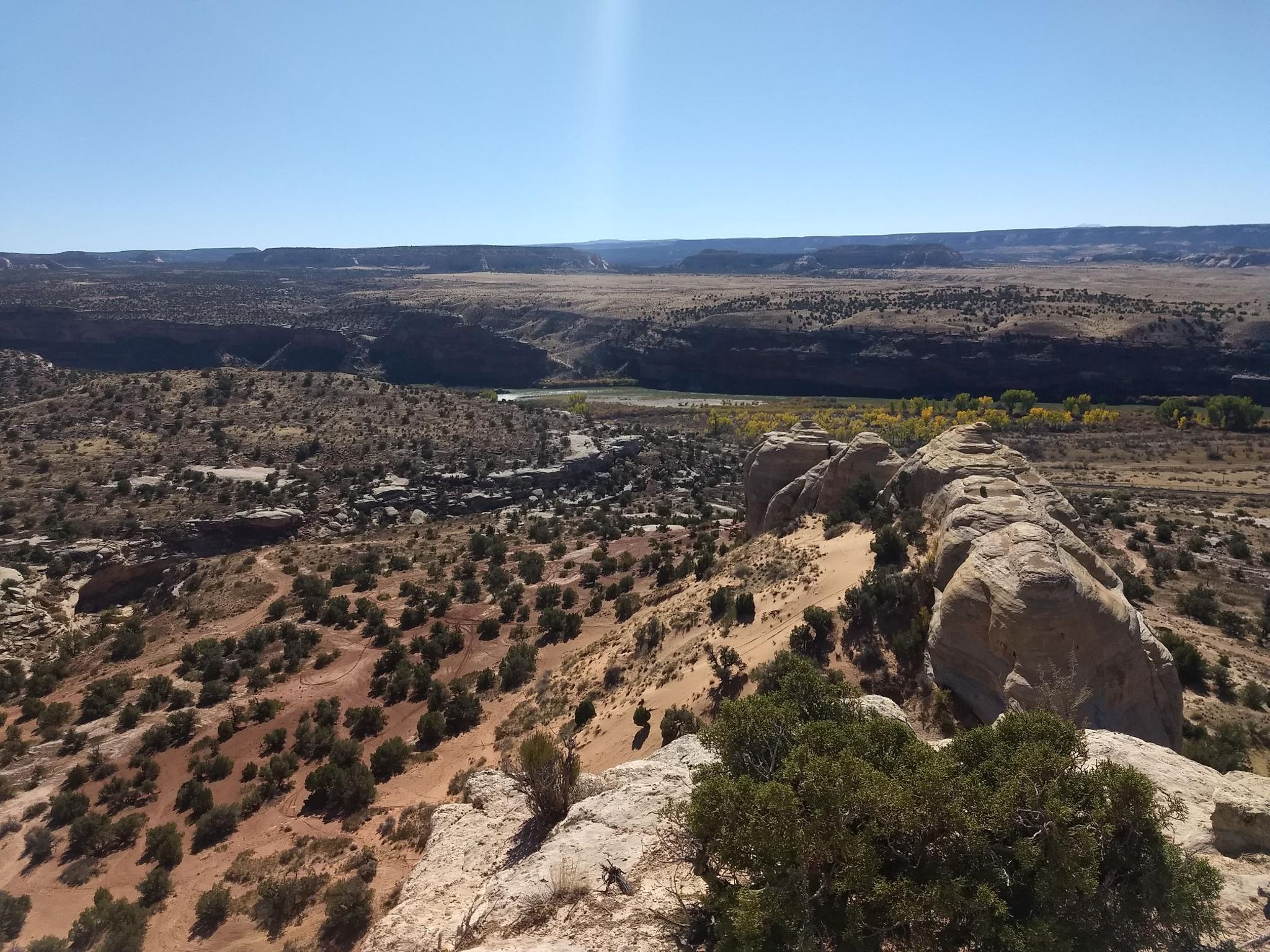 In the lower left, notice how the trail gets really close to the edge...: 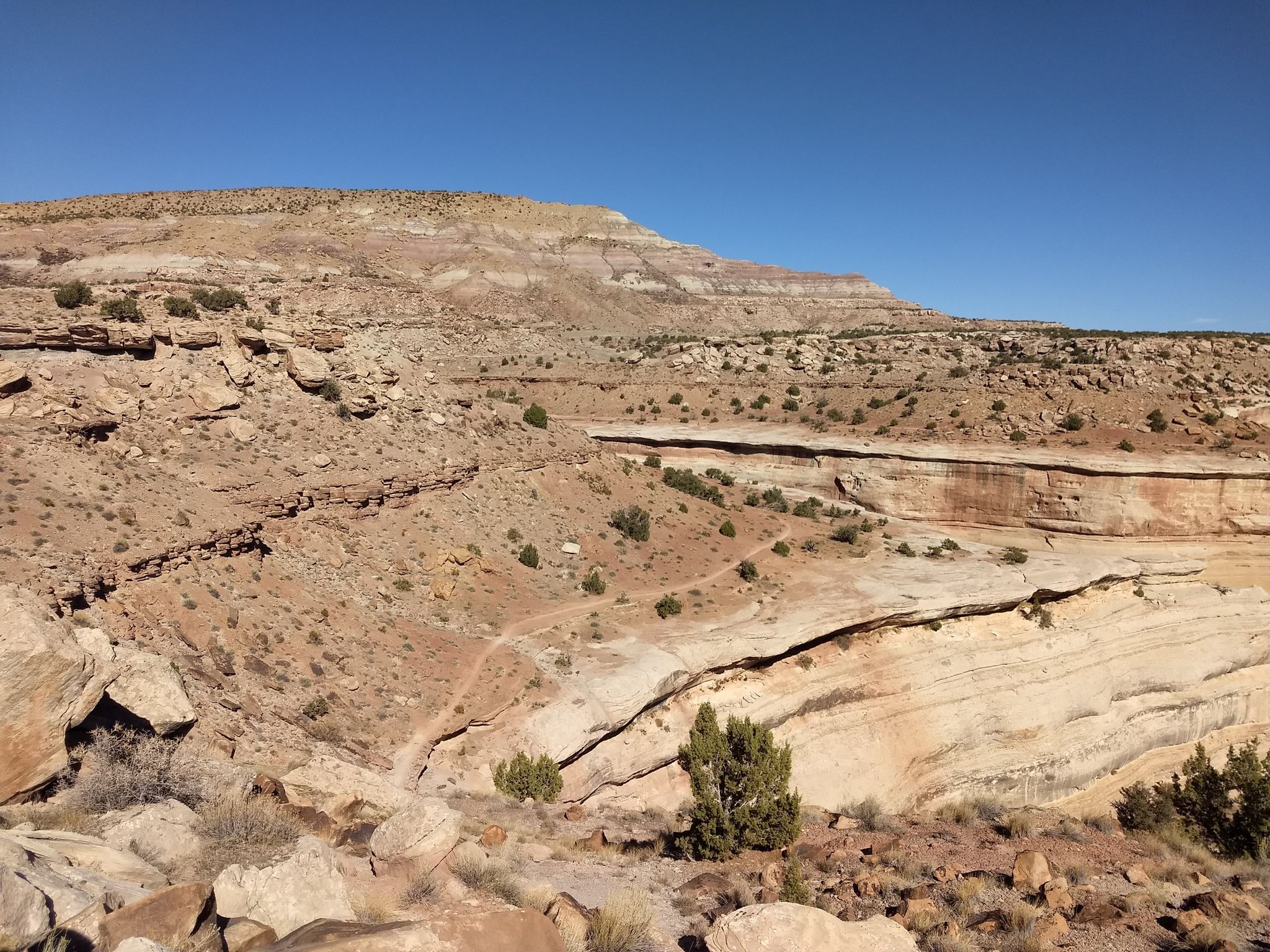 I decided on a quick trip to Fruita for some mountain biking. Since I got my usual "alpine start" at ~1pm -- and to break up the 4.5-hour drive -- I stopped in New Castle to do the Dirty Dozen loop I found online.

I ended up only doing about half of the loop, since I was running out of daylight, but this was a fantastic trail that I would definitely come back to -- scenic, smooth / not-rocky singletrack the whole way.

I had to walk some of the tight, steep switchbacks, and I also had to stop often to check my map, but it was still really fun. 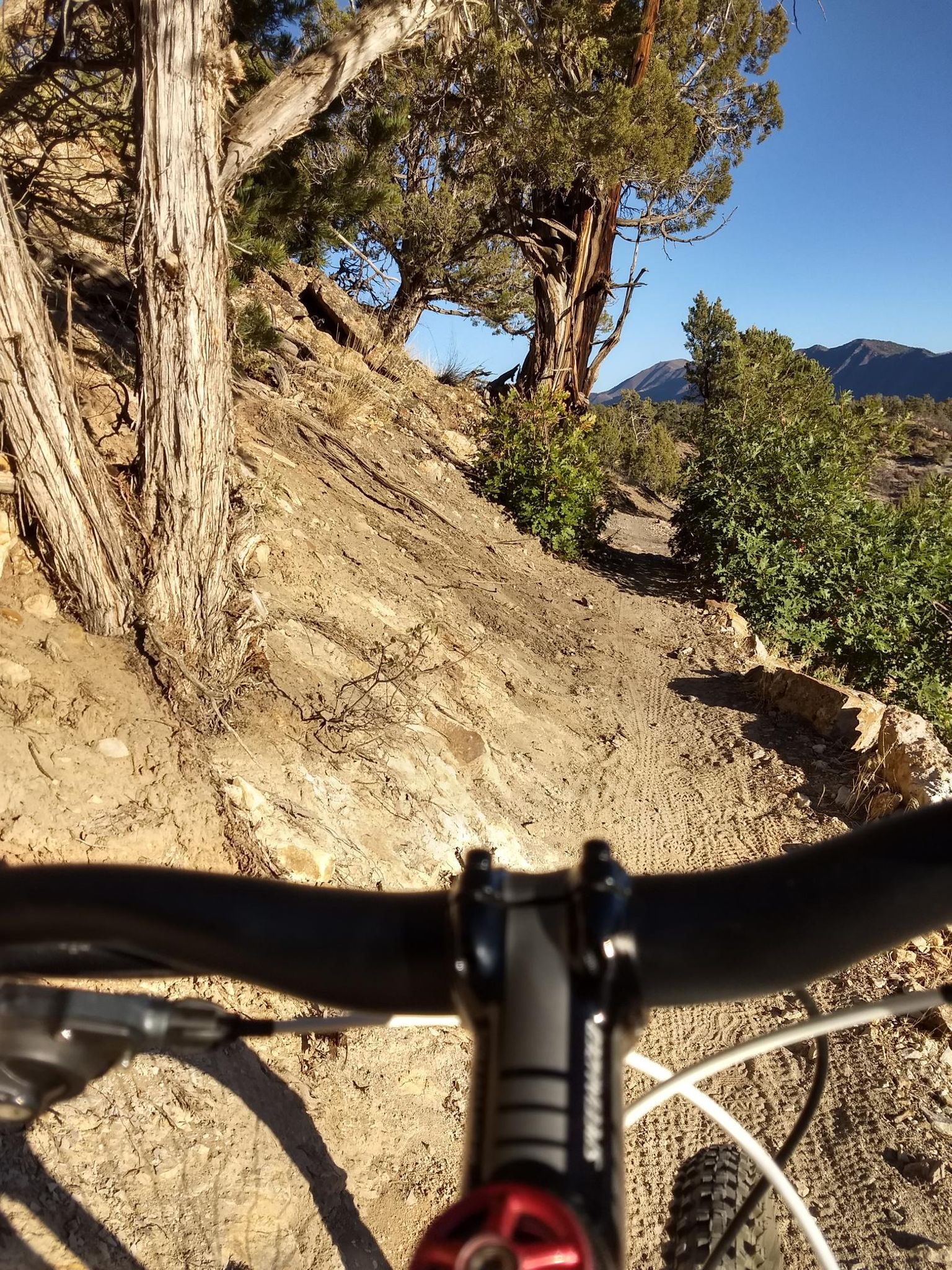 The wind today was RIDICULOUS. So I ran some errands, cleaned out my garage, and got ready for a mini-trip to Fruita tomorrow.