From Bradley Blvd., I ran southward on the Cabin John Trail, and turned around at River Rd. To get similar miles to what I'd run previous, I ran west on Bradley Blvd. 3 telephone poles to the base of the hill. It was 86 F; cooler than around our house. I ran slowly and cautiously. Mostly this was a test run for tomorrow. I almost went running both of the last 2 days but thought it best to give my right calf more rest. I was certainly feeling it today so I probably did the right thing by not running then. I felt the injury more when going uphill. I walked going uphill in a few spots. After 1.6 miles, I felt more warmed up and less pain but I did also feel my left knee. There were lots of people and some animals outside. On the trail there were telltale small round holes from the cicadas. What I couldn't determine was whether these were emergence holes, or holes that they were burrowing back into the ground in, to hide another 17 years.

Glen Echo, MD. From the Lock 7 parking lot, towards the C&O Canal Towpath, but into the trails along the river. The sound of cicadas here was very screeching, and contrasted a lot with the whir sound heard most other places. I headed northwest using unfamiliar trails and the towpath, but trails wherever I could to the top of Lock 8, then I turned around. Making a similar selection of trails and the towpath, even going out and back on the same dead end that I'd found on the way out (apparently called Cedar Island), I got within sight of Lock 7, and took one last trail. This one got me onto one of the intermittent islands (apparently called Cabin John Island) for a nice loop and almost an extra mile. I crossed one of several dry stream beds to get there. The trails were fun but they were starting to get overgrown in some places. After the loop, I returned to Lock 7 and finished at the parking lot. I think there might be more trails to explore on a taller accessible semi-island near Lock 7 (apparently called Chatauqua Island). On average, the trails I ran today were more scenic than the trails south of Lock 7. Though along the river, they were in rocky sections where multiple semi-islands separated the main current.

A little more than a quarter mile before getting to Lock 8, on an almost flat and soft section of trail, I tweaked my right calf. There was no reason for it. It follows a pattern of calf pulls that I've had in Spring seasons before. Now I have my left knee and right calf slowing me down. I stopped but decided to keep going at a slower pace. It actually felt pretty good later but I did have to walk on steeper and rocky sections to keep from doing more harm. I also needed a bathroom for the last half of this run. Besides these things and missing dinner with the family, this was a pretty nice outing and I'm glad to be able to take advantage of the longer days.

Cabin John Regional Park, MD. From the playground parking lot off Tuckerman Rd., I went to the northern end of the park on the flatter trails along the east side the creek. On the way back, I crossed the creek, but the usual sandbar had been displaced. I went further up the trail to a better crossing that got me across dry, but the only way out was through a deep gully that I'd mapped several years ago. With walls 10-12ft. high, I had to go along it a ways before finding a way out. Even then, I had to climb on a partly slippery side and use exposed roots that I could just barely reach after stepping up. Emerging, I surprised another runner on the trail. I passed him and 2 women runners further down the trail as I ran the western side of the park to Tuckerman Rd. In the central section of the park I headed up on the trail parallel to the power lines, and past the kiddie train. It was around 70 F and I didn't feel very strong. I was sore again. There were not a lot of people in the park. I did some shopping afterward.

From Query Mill Rd. on a spur trail near the intersection with Esworthy Rd., I ran up the Muddy Branch Trail (NE) to Turkey Foot Rd., then back to Esworthy Rd., and up to where I'd parked. It was about 70 F and sunny. The last 2 days had been far cooler than normal so the cicadas were roaring. I still didn't see any more than one might see a bumble bee. The trail conditions were good. With heavy rains Friday and Saturday, I thought it'd still be wet and for a particular section, muddy like the trail name. There were hardly 2 puddles that were easily passed. A few hikers were out. I didn't feel that strong, and my legs were sore for a while. My left knee held-up okay though I did feel it sometimes. 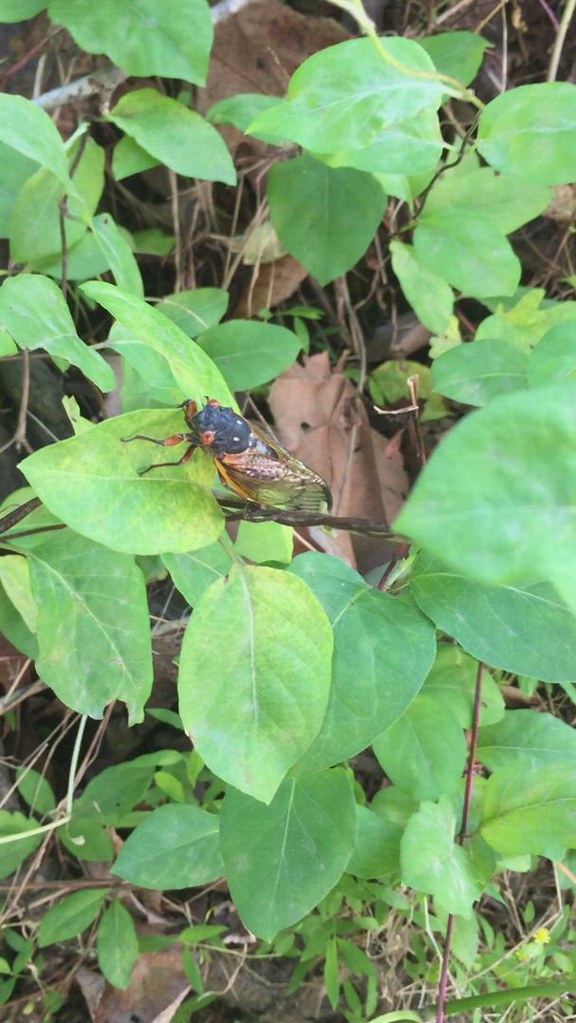 Afterwards, I dugout to expand one garden and re-did the edging on another. I could feel this in my back but hopefully it'll be okay tomorrow. I wasn't hungry much today. Waking up late, I didn't eat breakfast, but I also didn't each lunch. We had Cava for dinner. Normally I'd expect a drop in weight from missing 2 meals but I'm not sure that I will.

Glen Echo, MD. From the Lock 7 parking lot, to the C&O Canal Towpath, then south to Lock 6/Lock 6 Lockhouse, then river trails where I could back to the Lock 7 parking lot. As I was going down the towpath, I kept thinking someone was catching-up to me and would pass me. This occurred as I would move to the left to get around hikers, and I'd look back to make sure I didn't bump into a bike passing me. I also thought I hear footsteps at one point but they could have been my own. When returning, I'd gotten on one false trail just north of the pedestrian bridge, so I had to back out of that. With water high, I was worried I'd hit a dead end at the ditch near Lock 7. The trail was such a green tunnel, that I didn't realize I crossed it. When I got to a trail split further up, I took it and it took me unexpectedly, right to Lock 7. It was in the low 50s starting out. I'm surprised that I'm gaining weight, though there should be some correlation with not working out much last week.