Lawyer's Winterbrook Farm, near Thurmont, MD. Max, Samantha, Bog Angell, Ben Ficks and I went to a farm to enjoy the fall. We got there early enough to beat the heat; the sun was strong. After shooting the apple cannon at a Transformer-like target, seeing the farm animals, rolling in the bale rollers and a little more, we went into the corn maze. We all stayed together. The maze walls were thick and well maintained. Below is a picture of the map. Depending on when you see this, the image from my GPS track may reflect an older or future maze created in the fields. As of this writing, a maze from 2020 is shown. I was pretty accurate through the maze but did make one wrong turn that I was able to quickly recover from--that was in a curvy section. I also lost contact once when Max was leading. Also shown is Max shooting an apple that looks like it's on-target. We found that the smaller apples worked best for accuracy and range. 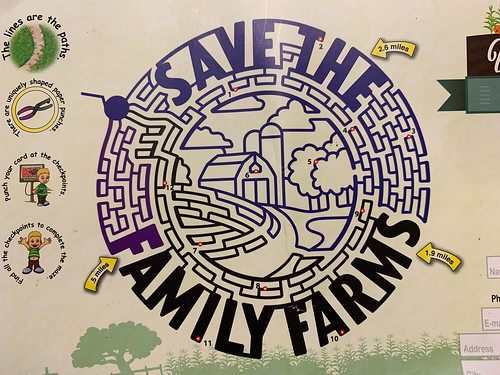 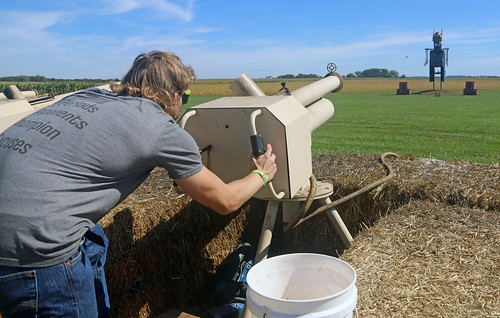 From Northfield Rd., to the pedestrian mall between Rugby Ave. and Del Ray Ave. I got lunch and ate outside.

From the pedestrian mall between Rugby Ave. and Del Ray Ave. to Northfield Rd.

Harriman State Park, NY, at the Kanawauke Parking Lot. I looped the restroom building a few times to loosen up. I hadn't run outside of short jogs when orienteering since August 18th. It didn't feel that great as I did this.
9 AM

Harriman State Park, NY. From the Kanawauke Parking Lot to the start of the Hudson Lowlander.

Harriman State Park - Hudson Lowlander (13K, 515m) - Having been out of commission for running for so long because of my back, I decided that doing the Lowlander competition was plenty enough. With medicines and rest, my back has been getting better since an incident on 8/17. It was a good choice and a chance for my son Max an I to be together. He too has had some recent back problems ever since trying to lift too much dead weight. He and I decided we would just walk or jog the entire time. it was great sunny and breezy day for being out. We enjoyed the course but we weren't error free. Phil Bricker and David Yee ran/walked together taking different routes from what Max and I did. We changed leads a few times.

S-1 - Max and I walked straight up the hill to the trail/road intersection. We were behind many others but not as far behind as we would have been had we not gone straight. Getting on the trails, we left the cabin area near a bend and then went straight in to spike it. We passed some others who'd gone different ways.

1-2 - The group ahead all went left and up. Max and I had been inclined to stay low but I set into following the group. We completely missed the road option that course setter Greg Balter showed me later. As Max and I climbed, I read along pretty well for a while. We passed Phil, David, and some others. It got more confusing near the top. I expected to see a blazed trail but didn't. I got us on what looked like the mapped trail, then it seemed to disappear as we headed down. I cut right still expecting to find the blazed trail but didn't watch my bearing. The group we'd passed went left. It quickly became clear that we Max and I were off-route. We dropped to a marsh that helped us to relocate. Ironically, it was just south of the road route that many saved time with. We still didn't take the road. Using trails we went along a wiggly route that eventually put us north of the control. We left from a trail bend just past a small cliff, punched through some green, and spiked it. We'd made-up some lost time on Phil and David but just before we got there, the came in from the south to get there before us.

2-3 - Max and I chased Phil, David and one other guy along an intermittent trail and a stream. I lost contact briefly near the top. Phil went a bit left of us. We ended up coming to the control from the right side of the cliff while Phil and David came in ahead of just from the left.

3-4 - Max and I decided to take the route to the right, along the power lines. We thought we might go north of Lak Skenonto, but along the way we saw the way to the south of that lake and to the edge of the map at Lake Sebago. We left #3 ahead of Phil and David and were moving well for a while. I thought Max should set the pace but when he did, he slowed. His back had been hurting. On the flatter trail along the power lines, we walked. Phil, David, and a Russian orienteer passed us. We were surprised that those that passed us went left where Max and I saw we could follow a trail right to Lake Sebago. I think our way was shorter. Max and I kept walking. We ended up going up along Lake Sebago to #4 and spiking it, getting there just behind Phil, David, and the Russian. Noteworthy on this leg was seeing Sharon Crawford taking our route (she'd already hurt herself by this point), and seeing Anna Campbell. Anna was on all 4's with one hand in front of, and another behind a 4-5 ft. long snake. She was trying to coax it into her hand but it slithered in the wrong direction. She has an amazing eye for spotting reptiles, and such a deep interest in them too.

4-5 - Max and I made up ground on the 3 orienteers just ahead of us. We all pulled into the aid station one behind another. At the aid station, Max and I drank and ate. We saw Joe Barrett come in, leading the Highlander race.

5-6 - Max and I left about a minute after Phil, David, and the Russian orienteer did. They took the road and sometimes jogged. Max and I went across both parking lots to the far corner, the across a linear marsh, through a short bit of forest, and to the control. Greg, running the Highlander, passed us, but we made-up time and got ahead of the other 3 Lowlanders.

6-7 - I walked off quickly and Max seemed to enjoy getting ahead. He and I both felt a bit energized by all the sugar and other stuff we had at the aid station. I was reading the terrain well at our walking speed and pointing out things to Max who concurred. We spiked the control. Phli and David had fallen off the pace.

7-8 - I lead Max and I in, once again feeling good contact with the map. It was nice for both of us to have some shorter legs.

8-9 - As we were pulling away from #8, Jordan Laughlin (Highlander) appeared behind us and quickly moved ahead. Max and I had thought to go around to the right but it started looking too rough. We climbed more directly. On top, I started getting a bit too far left but fortunately, I saw it off to my right just before passing it.

9-10 - Max led us on this leg but I kept pointing out boulders and cliffs. I saw this one far off.

11-12 - We dropped to the road and went left. Looking at the stream crossing between Lake Kanawaukee and the smaller unnamed lake southwest of it, I didn't feel comfortable. It seemed we could run the road longer, and run the lake shore like we had successfully along Lake Sebago on the way to #4. However when doing this, we found unmapped stone under the rough open vegetation. It was rather slow going. We also climbed the steep 8 contours to south of the power line ride. We eventually got on the trail and road. Going around the marsh on the west, we read our way up to the long cliff SW of the control. Max was leading and pulled higher instead of attacking from the end of the cliff. I cut left, but not enough. I missed seen the control and got past it. We started fumbling around when Phil, David and the Russian orienteer had caught-up. They punched first but gave away the control to us. Max and I were right behind them.

12-13 - I lead Max to catch the other 3 orienteers. Just walking, we passed. Just before the control, I started to pass the control, when Max saw it on my left. Phil, David, and the Russian they were with, were right behind us.

13-14 - Max and I felt we needed to push to stay ahead, and so we jogged our way out toward the trail. It seemed that Phil, David, and the Russian had not pushed and were back to walking again. Once the road, we moved better. We cut the angle toward the buiding but found the control more at the end of the trail to it, as the control description indicated.

14-F - Max and I moved faster but once on the pavement, Max suggested going for the fastest split. I told him to go ahead with his sprint in, and I finshed at a jog, a little behind him.