From Northfield Rd., Greenwich Park, to Old Georgetown Rd. to Johnson Ave./Hempstead Ave. to McKinley St. to Garfield St., to Roosevelt St., to the trail at Jefferson St. to Northfield Rd. It was in the 30s F and a little windy going out. I felt a little better coming back but my right knee was bothering me.

From the intersection of Elmhirst Ln. and Elmhirst Dr., to Elmhirst Pkwy. to the Elmhirst Trail, to Cedar Ln., then downstream on the paved Rock Creek Trail to Mile Mark 4, then onto Beach Dr., which was closed, back to Cedar Ln, and back the rest of the way that I'd come out. I expected the park to be busier on this Thanksgiving Day. Some people were out, but not many. I needed a bathroom and eventually stopped at an outhouse. My knee bothered me both directions but lesson the very gradual uphill way back. A faster runner went past me like I used to run.

In the evening we hosted a dinner with a few friends and I hadn't laughed that hard in a long, long time. I was getting out of breath!

From Northfield Rd. I ran up to Custer Rd., to Wilson La., to Exeter Rd. to Glenbrook Rd. to the Bethesda Trolley Trail, to the NIH grounds, to Maple Ridge Rd. to Georgetown Pike, to Huntington Pkwy., to Custer Rd. to Northfield Rd. I didn't feel so good today. I was tired on minor climbs. My right knee continues to bother me and my left leg gets overtired compensating.

Hoyles Mill Conservation Park - Starting from Hoyles Mill Rd., I ran down to the bridge, and a little further before starting-in on the NW areas; north of the creek and west of the Hoyles Mill Rd. This is just across the creek and road from where QOC is soon to host an National Ranking Event (NRE). I'd been in this section only twice before. Once was on an initial scouting with Peggy, and the other time was for field checking after finishing the mapped areas used for the US Team Trials last spring. I didn't have a lot of time but used it well. I refined a large green area then covered areas along the creek. I was mostly in light and medium green forest but I did find areas with white forest. I found some more rock and was able to match-up ditches in light green areas. I finished by jogging back to the car at dusk.

DVOA: Mid-Atlantic Championships at Fair Hill Mason Dixon. Tom Overbaugh set the courses. I had fun but struggled with the climb. Even in the fields, I was having trouble running, but so did others.

S-1 - I wasn't very warmed-up but managed to jog up the trail. I could see the control from the trail and angled over to it.

1-2 - Back up to the trail, then down past the reentrant.

2-3 - Around the low vegetation on the left, then across the field. I got a little too high, perhaps distracted by people coming down from a different route.

3-4 - I didn't bother getting to the trail until I hit the forest. Turning right at the intersection I crossed the road and attacked. I was pretty close to on target but came in from the left (east) side.

4-5 - I used the ride to get to the field edge. As I did, I saw the road/trail route option. I figured I'd already gone to far to make it work, but also I was moving slow enough that any extra distance would be hard to make up time for. Crossing the field I was further right than intended, I went around the boomerang shaped tree cluster on the west side, then turned left. I'd gone this way because I saw the trail mapping was a ride or intermittent. As I eventually got to this trail, I saw it had been improved and the map didn't show it. I used trails to cross the creek and then saw the big boulder on my right. I basically ran/walked around the low vegetation to spike the control.

5-6 - I crossed the saddle the went into the forest on the left side of the large reentrant. Once across the creek I got on a trail and left it soon after at a bend to spike the control.

6-7 - I climbed to the trail, turned left on it and left at the next bend. I dropped dwon and didn't realize how high above the creek the control was. I walked up after stopping at the creek valley edge. I probably lost a minute or so.

8-9 - I hit the trail and ran on it. Having mis-read the fencing and taking it for a trail, I went ito the field, then had to come back to the same trail I had been on. 2 other guys were near the bridge as I got there. I was moving slowest but when the faster runners would stop, I'd catch-up to pass for a short way. The mapping was off in this area--it was scattered open but mapped mostly green. The trail had become intermittent. I missed an intersection so I popped out with one other guy onto the road further south than intended. I climbed the next trail up toward the field but when the guy ahead went into the field, I used the trail through the forest. It had less climb and was easier to run on. After the trail got to the field, I stayed in it for a little while, until I saw another clear opening back to the trail. After rounding the last green, I left the trail and could see the guy who'd been with me at the bridge but had taken the field route. We were even though he was running faster. I was on target but couldn't see the control on the hillside. In the hesitation, the other guy went ahead and punched first.

9-10 - I went straight and so did the other guy. A younger guy who'd also been at the bridge was lower and missed. I was just bellow but didn't.

10-11 - The guy who'd beaten me to #9 went for the trail. The other younger orienteer did too. I kept straight and hit the trail just before the stream. The other 2 went around but I cut through the light green running the whole way to basically punch right about when the other 2 faster runners did.

11-12 - Not only were the 2 guys still with me since the big bridge, but we'd caught 1 or 2 others. The lead guy started for the road. I decided I'd go straight and pulled the others along after they figured what I was doing. I got to where I could see the rootstocks but went around them, rather than crawl under the tree trunks. That let the same 2 guys punch just ahead of me.

12-13 - Straight. The other 2 guys were much faster climbing. One was on my left and one on my right. The youngest punched first. I was a little left but didn't lose any time, and punched 3rd.

13-14 - I had a brief thought of crossing the field. The other 2 guys seemed headed that way. Then I saw that going back down to the road was best. I pulled one of the other guys with me. Once on the road he took off. I did see that after the covered bridge he turned left on a trail along the creek. I went to open ground on the SW side of the pond. The other guy got hung-up in thickets so I was able to punch first.

14-15 - I went straight, using the wiggly trail, and managed to punch ahead of the other guy who'd been near me since near control #8.

15-F - I hesitated as I almost took the wrong trail. The other guy passed me for the last time. He finished well ahead since I was going slow and my right knee was hurting.

Overall, I did okay. I could have improved by seeing the best routes more quickly. I ran 6.5K and 227.5m climb for a course rated at 5.5K and 170m climb. I had pre-chosen not to run the relay. I'm just not in adequate shape to have done both courses without unnecessarily risking further injury. 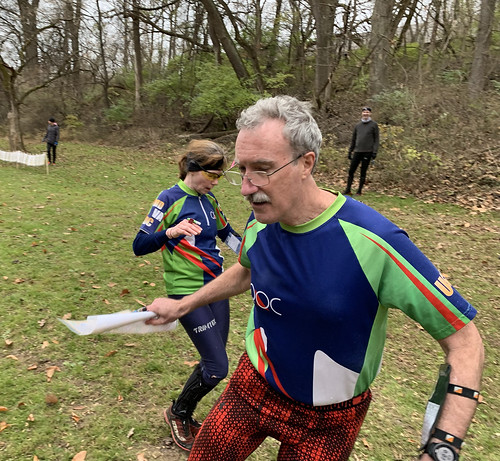