OK event at Slough Creek. Fritz wanted to start at the northern end of the map. Where there is no shelter and no bathroom. So of course it was 30 degrees and getting colder, with light snow. 34 pre-registrations, 25 showed up. I did some beginner's briefs and talked with Gene and Gay who were working registration. Then I went out on my course.

Mike had said he was cold while running, so I piled on a few more layers. I ended up being a bit warm.

I didn't warm up, just started the course. I have to walk until I warm up my muscles. So I chose to walk straight towards 2 instead of running on the road.

Corey was gaining on me by 3, which helped motivate me to move quicker. We were together until the road run towards 9, when he pulled away. I caught him again at 11, and was quite surprised when he headed off in the wrong direction to 12. I never saw him again.

My biggest mistake was 13-14. I left the control in the wrong direction and realized it when I hit the field. I turned back, but I should have taken the field. The woods were really crappy (more so than the rest of the course) and I got pushed off line.

It felt good to run and move through the woods and have a real competition. 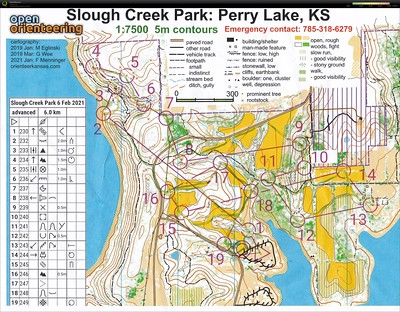