PTOC race at Heartland Center. Mike and I carpooled with Sandy and Dylan, so I had time to catch up with Sandy. A bit cold to start but I warmed up nicely.

Sandy and Dylan started ahead of me and I tried to keep up with them. I had glimpses of them as we backtracked through 1, 2 and 3. I also saw Marv and Bill S in here.

Slight loss of confidence right near 4 when the vegetation didn't make sense. I should have stayed lower. Saw Bill coming into 4 from the east, and chatted with Marv as I was climbing the hill out of 4 and he was heading down.

The vegetation also threw me off near 5. I should have paid more attention to the contours and compass direction.

I was surprised when I beat Sandy and Dylan to 6. I saw Mike just as I was leaving 6.

7 to 8 I debated climbing the hill once again but I just couldn't do it. I was rewarded with a nice deer trail along the second half of the stream. I got to 8 just as Mike was arriving from the field.

Slogged up the hill and then Mike passed me on the road run to 9. I tried to keep him in sight, so I pushed the pace here.

I saw he was going around to 10, so I decided to test the straight route and compare our times. I did OK but I think I was further behind him on this leg (percentage) than 8 to 9.

I wasn't looking ahead on 10-11. If I had, I would have stayed more on the straight line, and avoided the reentrant filled with downed trees. That was a real slog.

Happy to have a fast run today, although Mean Gene still got me by 10 seconds! 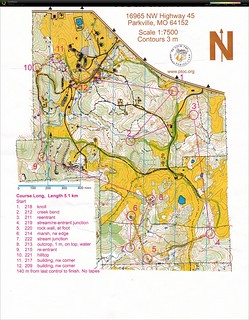 It was a nice warm evening. I enjoyed a short jaunt around Holcom.

Thanksgiving day four. Today I went to three of the controls I had not been to yet this weekend. I took trail routes for the most part because it was crazy windy out there. The few times I went across the fields I had a tough time with the headwind. 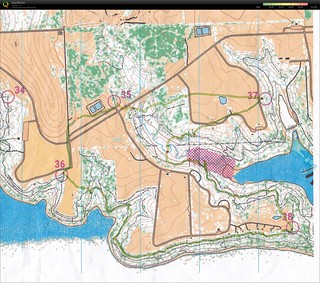