Our annual New Year's event. I had a sense that we would get a good turnout, since I was getting emails and Facebook messages from strangers. Plus it was 15C. And we had a massive turnout (for us. 46 starts, probably 75+ people). We ran out of epunches and even had to use my 2 punches. I tried to be greeter, but then I gad to give 2 beginner's briefings and then there was a mass start. I decided to help Fritz in case there were issues with results (and there were tons of issues). People started finishing right away and then we were swamped again. It all ended up well and people had a good time.

Fritz set unusual courses, as is his style. At the end, there was a maze-O which looked fun. So after most people had finished, I walked over and did the Maze O section. I had really wanted to go out today but it was not possible, so this was the best I could do.

Nice lunch after with the usual gang, then home to get the results all cleaned up and posted. I was also tired and worn out from the day, which was very windy (things kept blowing over, including the computer).

Overall: 263 (edited: 261) hours of training
--met. Even with the lower number, this is the most I have ever trained in a year. It pales compared to other people I know, but I'm making steady progress.

Some other numbers:
0 new O countries (did not leave the country this year)
1 new O state (New Mexico, brings me to 40)
3 garments sewn (a new low)
27 books read
New PR in the 50 m
10 work trips
First year on Brown. Previously, I had only ever run Green at national O events.
11 AM

Nice day for an easy jaunt around the neighborhood 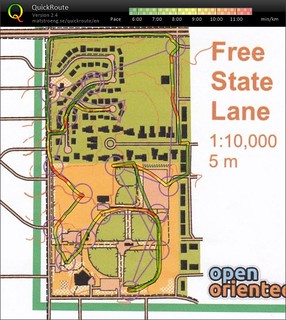 Mike and I went out to Woodridge. I hung tapes for my February event.

Moving on the trails at Clinton. I ran without a map and just explored. I went to a few areas that have recently opened up as the water receded. It was cool, and weird, to see the water line on the trees and bushes. Sometimes it was over my head.

Went to Paul C and Linda's 50th Anniversary party this afternoon. We carpooled with MeanGene and Dee, which was nice company and conversation.
4 PM