I couldn't move as well as yesterday due to the downed trees and viney things (especially for the first few controls) and it took a while for me to wake up and get my mind into the map. I knew I wasn't sure of my route approaching 2, but I didn't think I had wandered as much as my track shows. I remember I finally told myself to just head down the hill and stop trying to figure out the ditches, the trail behind the control would stop me.

I had a lot of fun going to 7. Finally, there was open woods, down hill and good visibility to my attackpoint. I actually said "Weee!" as I ran down this section.

I thought the stream between 7 and 8 would be harder to cross (is the color incorrect?), so I headed out of the way to cross on the trail. But when I saw that the stream was crossable, I corrected and went straight across.

I go tired and sloppy going to 11. When I climbed too high (in the wrong direction) and saw the road, my brain thought I was near 12 but nothing made sense. I decide to run back down hill to the trail bend and start again. This time I was going in the correct direction, but got pulled aside (stupidly) when I saw someone leaving another control to my left.

I enjoyed the challenge of today's race, and some of the nice woods. The temps were perfect.

Nice dinner in downtown Covington at Mystic Grill with Dick, Nancy and Reta. 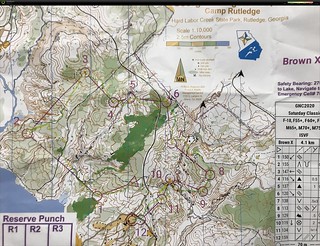 This went better than I expected, but not as well as I wanted. As I warmed up, I realized that I was not in orienteering shape, I hadn't been in a competition in a long time and my map reading and mental habits were rusty. My goal for the day was to "read the map".

I felt OK physically and was able to move well through the nice woods. Things seemed a bit off on the first few markers and I doubted myself a few times, but kept moving. Until 3 where I was right on track, saw my marker but also saw another one that seemed to make more sense and I stupidly went there first.

As I was going from 4 to 5, I took a glance at the next leg. I knew that straight was probably the best choice but somehow in my brain the gully looked bigger and longer and I decided ahead of time I had to run southeast around the gully and then up to the marker. When I got close to 5 I was surprised to see MeanGene (who had started before me). I told myself not to get thrown off or think about him, just punch and run SE. So I did, never looking at the map again to see that the gully was not an issue and I was making a stupid error.

I was lucky it was a short leg so I didn't lose much time, but I'm disappointed in how my brain functioned (or really, didn't) on 3 and 6.

I'm probably the only person who rested at the Go control before the run in :) I had fun sprinting, I haven't sprinted in months. Hope my finish chute time holds up well among the USMAOC cadets.

Bummer of the day was that MeanGene pulled a hamstring, wasn't able to finish the course, and will not be running day 2 and 3. This was his first time at the GAOC event and he was looking forward to the competition in the nice woods. 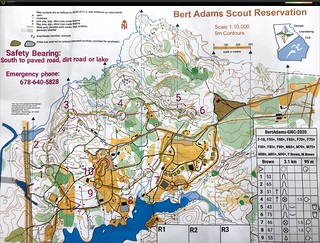 Nice dinner at a Thai place (Bangkok Cafe) with Cristina and Gene. And I almost forgot, we started the day with a visit to the camera museum, which was interesting and just the right amount of touristing.

We took it easy on my legs tonight since I have a race this weekend.

An easy run to check out the new tunnel under 19th and Iowa. We often stopped to look at progress this summer/fall, trying to guess how it would be laid out. Now it's finished so I could finally see it all. My GPS tracking worked going east/west. but got all wonky when I went north/south.

There was fresh snow and a layer of ice on the trees so I took it slow. I also chose routes through the fields, on purpose, to get some terrain practice. It will also make me really love the woods in Georgia on Friday!

I must admit I wasn't mentally into this training and my mind wandered a lot. (edited): I was distracted by looking at tracks in the snow. Mostly deer, of course. But also squirrel, bobcat and coyote.

The shoreline is really eroded so I had to take some different routes on the way to 6. Then I noticed it was time to get back to the car to meet Mike, I didn't mind skipping 6 and 7. 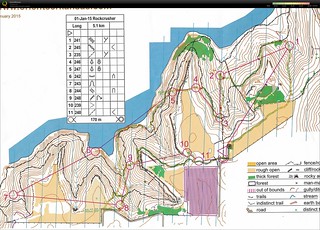