PTOC event at Blue and Gray. Mike, Sandy and I drove together, which was a great opportunity to visit with Sandy for 2 hours.

My mind wasn't in it at the beginning and I made the same parallel error on both 1 and 2 (going in too early). Doh!

The trails were a muddy mess, the woods were full of thorns, and the hills were there. I pushed the pace a bit to practice orienteering on the edge (for me) and consequently I didn't do a great job on route choices today. But no big errors (after 1 and 2), so that was OK. 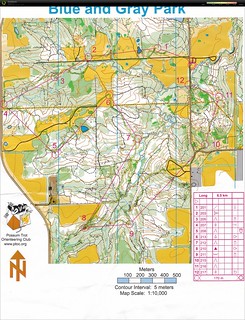 Another early to work, earlier back to hotel day. A successful day at work, one more big push tomorrow for the big deadline. The team has made heroic efforts this week.

I was at work by 6:45 am this morning, so I had no qualms about going home at 4:30 and working out in the hotel gym

Nice dinner with Dave and Bethany in Stoughton.

Travel day back to Madison. I did a HIIT workout in my hotel room, I had taken a HIIT class last year (Parks and Rec) but it wasn't really what I expected. This was a workout that I found online and was more like I expected (30 seconds intense, 30 seconds rest)
C • HIIT 2

Before the race, I thought I might take it easy today and just enjoy being outside. But it's hard not to get excited at a mass start, especially when most people are heading in the same direction... I ended up running quite fast.

This was a fun race because Fritz and I were together the whole time. He is a faster runner than I, and he could run up the hills while I had to walk. But I could sometimes beat him on route choice. I made a game of it, taking the trail when he went straight, going straight when he cut a corner, etc. It was a mini training-camp for me.

I ended up going for 10 and 12 while he went to 3 and 10. We met at 2 and I rushed into the finish but was still 3 minutes late. He walked it in and got back 5 minutes after me. I later found out that he had already run a road race earlier in the day: impressive!

I was pleased that I pushed the pace and ran hard the whole time, It's been a while since I pushed this hard in an O race (helps that it is a familiar park). 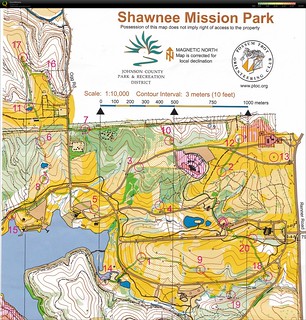