I went to Clinton to try to go in a straight line. This is tough for me for some reason. And it didn't help that I was tired.

At this point, I was too mentally and physically tired to keep going. That's why I like drawing courses for myself at Clinton: I have no qualms about giving up.
I headed back to the car along the trails, since it was very windy and cold out in the open. I added a bit on at the end to check out some things, and bring my total to 7 hours for the week.

I hit another milestone today: this was my 100th orienteering outing for 2020. I've never done this many before (although I've come close a few times). That's kinda cool. 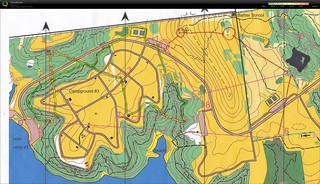 Back to SMP for the North half Possum. I debated waiting a day to give my legs a break, but I had planned this so decided to stick with the plan. Once again, my goal was to be 15 min/k.

Lots more people in the park today. It was a bit cooler than yesterday, and I wish I had worn gloves at the start. But I warmed up soon enough.

Control 2 was a repeat from yesterday. I had found a deer trail when I left the control yesterday, so I happily went back that way today. Much easier! I kept my eyes open for deer trails both days; they were often very helpful to get through either the crappy woods or the tall grass.

The "yellow" areas are all tall grass (knee to waist high). Fortunately, they often mowed the grass along the edges of the woods, so that helped. Also, there are some areas that were burned, which was very nice of them to help me out :)

3-4-5 were a slog because of the crappy vegetation. Global warming has not been kind to this park. I doubt we could hold a national event here again. Here are some photos I took today that demonstrate the vegetation: 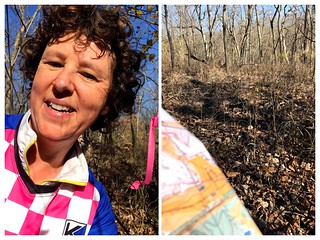 I stopped after 6 to remove a thorn from my foot. I took a header on the road to 9, right in front of a woman walking her dog. And then right on cue, about 1:10, I had a brain fart and couldn't figure out which trail I wanted and which direction they were going. Doh!

I thought my route choice to 9 would be fast because I could take big trails the whole way. Then I lost time on the trail junction mess, and I lost more time looking in one reentrant too soon. The body and brain were getting tired. It's even worse because 9 was on yesterday's course, too.

I thought 11 would be easy, it was also a repeat from yesterday. But the yellow trails are not yellow, they are overgrown. Most are the same as mapped, but others are gone or new ones have popped up. Total brain dead moments of wandering around without a clue of where I was. I was really glad to hear the UsynligO ring tone, before I even saw the tape.

Didn't quite finish under 15 min/k, but that's OK. I subtracted 1:30 from my time, from when I stopped to take pictures. 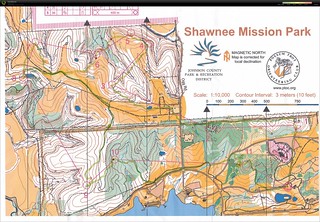 Possum Trot II south half
PTOC hung flags from Possum Trot II in SMP. They also created some half-Possum courses (which didn't exist back in 1998). I decided to run the south half today.

I had to stop at control 1 to adjust the UsynligO control radius so it would record the marker. I had no fun getting to 2. The woods are really crappy and the "trails" don't exist. But it was so nice to see the long tapes hanging at each control. I haven't trained with tapes or makers in a while, I almost forgot to look for them!

The light green woods are tough now. Lots of grassy underbrush, tons of downed trees and branches. It was no fun. I was tripping all over the place (but no falls). I was not wearing spikes (gotta get a new pair) and the leaves were damp and slippery on the downhills.

I hit the wall after control 8 and had a brain fart on where I was and which direction I wanted to go. I had eaten a handfull of trail mix at 30 minutes and 60 minutes, but I guess this wasn't enough.

Nice day, warm weather. Saw people in the park, but not too many. I was running in the middle of the day, when most folks are eating. We eat later (5 or 6 pm). I was warm enough to eat outside, which made for a safer Covidgiving 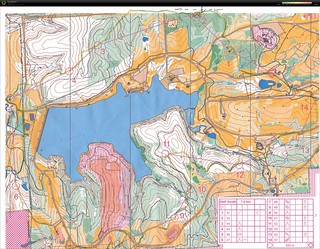 Mike and I went to Perry. I drew a course that went to natural features that I had not seen before. I had never been on the part of the map near 1. I skipped 7 because I was running short on time. I wasn't sure that 8 would actually be rocky, but it was the remnant of an old road, and they had piled up the rocks along the sides. It was pain getting to 10 but I only have myself to blame. 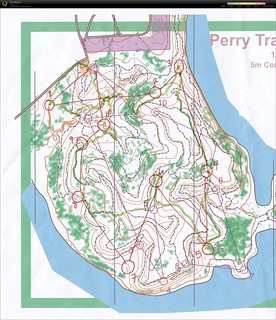