So nice to go to a regular local event again! I miss talking about route choices, hearing the beep of the control, and having the pressure of competition. Not to mention being able to see a marker from far away! So much fun, beautiful weather. Great to see everyone, too!

On the other hand, the woods are total crap and that was tiring and annoying. Also, my navigation sucked, which was also annoying.

S-1: a trail run, should have been very easy, go to the end when the trail bends. I often have too much adrenaline at the start of a race, and I think that may be part of the reason I make mistakes early. This one was also due to not following the plan and having no clue of distance. I swore I saw the final trail bend just ahead, and there was a nice deer trail to my right, so I took it. Hit the road, into the woods, and ??? Wandered a bit, back to the road, finally figured it out. At this point, I still thought I had left the trail fairly close to the trail bend. It wasn't until I downloaded my track that I figured out that I had left the trail very early. Must follow the plan and go all the way to the trail bend!

1-2: After I crossed the stream, I found the new road construction we had been warned about. I assumed it was all new, and didn't connect it (in my mind) to the big yellow swatch running north/south. Once again, I had no concept of distance. When I climbed up the cliffs, I thought I was on the hillside just north of the marker. It was only when I started to notice the field to my left, and the "construction" to my right, that I finally figured out that I had climbed one hill too soon. Now I had to go down and up the steep reentrant on loose leaves with non-spiked O shoes. That sucked (I ordered spiked shoes as soon as I got home). The woods were very tough, I was tripping and falling everywhere. Or getting stuck in thorns and having to back out. I saw Mike as I approached 2 (he started after me).

2-3 was easy although not fun to run on the road. Hard to get down the hill, I couldn't move fast.

3-4-5 were straight forward and I ran on trails part of the way.

5-6 was my best leg. A lot of folks messed it up, but I planned, and managed to find the open area to the west and then took a rough direction in. I was still surprised to see the actual marker (it was higher and more to my left than I expected).

7-8: I saw the trail option (north, west, south) but I knew I couldn't run it so I decided to go straight. I also knew I was getting good at finding deer trails. And I found a great one this time, heading due west. Did I ever stop to think I should be heading NW instead of W? Nope. When I got to the road and recognized a pile of logs and said (in my head) this is where I came out for #1, did that stop me? Nope. Still wandered through the reentrant and back to the road before I figured out where I was. Had to cut up to the next road bend by going through crappy woods that cut me up. So I made it straight through the woods quickly, then lost a bunch of time by screwing up the navigation. Should have walked the trails. As I approached 8, I got so caught up in thorns that I actually screamed out loud, and probably scared Gene. I said Hi to him as I punched the marker, but he didn't respond and kept going. He was on another course, so I figured it wasn't his marker. Turns out it was his marker, he must not have seen it.

8-9 went too far north before turning west, had to head back south to look slowly for the marker. Reta was also looking around here, and I saw Bob leaving the depression which helped me.

9-10 After I crossed the main trail, I made a 90 degree error and walked east for awhile. Doh! Bad day for compass reading. When I approached the control location, I saw Angie and Dave. They looked like they had found it, and I knew it was close by, but I couldn't see the marker, so I slowed down. Turns out it was perfectly blocked by one tree, and I didn't see the marker until I was 5 feet away.

10-11: decided I had to slip and slide my way down the steep hill. More crappy woods, but then there were finally more trail options. Mike joined me on the trail to 11, although he was going to 13.

13-14: I didn't see the trail option this time. I was tired and when I get tired, my brain only sees the straight line. More rough woods. 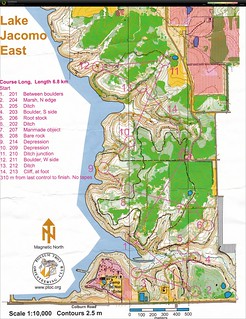 I felt a bit out of it and my hands were cold. I walked lot. But I listened to a podcast today (I don't usually) and the time flew by and I was one minute faster than last time.