PTOC event at Hodge Park, 11C and raining. Used MapMyRun for GPS since I left my Garmin at home.

The woods here are really, really thick, so going around is usually the best option. But I'm still not used to thinking of myself as a runner, so I still look for direct routes through the woods (like 9-10) instead of the smart move of going back on the trail and running along the grass. I groaned when I saw 10-14 because it was straight running.

I was with Eric for the first 4 controls, but then I moved away from him, which surprised me. Mike passed me by taking the better route from 9-10: I saw him leaving 10 but had not seen him before that. He was out of view by the time I got to 13.

When I got close to 14, I left the main trail and headed into the woods, right towards the rootstock. I was surprised to hear Mike calling to me from the trail above. He had just found 14 after looking for 5 minutes. It was up high and about 100m north. Thanks! I never would have found it otherwise; I probably would have relocated once or twice and then moved on. Of course, a lot of people lost time here. Poor Dean (who usually wins our local races) spent 30 minutes here.

I was thinking about avoiding the thick woods leaving 16, so I went way around. What a silly decision, the leg was so short. I was second-guessing my previous bad decision at 9-10.

I finished second behind Mike as everyone lost time at 14. Even looking at times without errors, this was a fast time for me and I felt pretty good on the running legs (which included walking breaks). 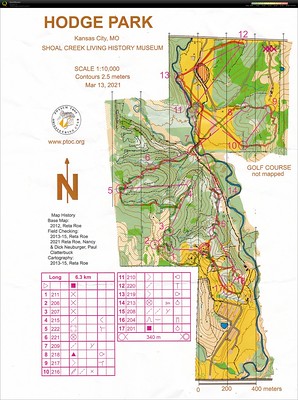 I was feeling blah, mentally and physically, so I decided I needed to get outdoors and explore someplace new to lift my mood. I went to Martin Park for the first time and hiked around. It was just right.

Then my mood was lifted even more by chatting with folks at the orienteer's happy hour. Thanks for joining!
C • Thanks for organizing! 4

Hot n Hilly Loop. It was actually hot today (21C). I felt surprisingly good and covered more distance than usual in my one hour.

Eric set the courses and hid the markers. He also likes long, runners legs, so we were in the grass more than the woods. I was the last starter and I told them that I expected to be out 90 minutes, if they wanted to start picking up markers.

Only mistake was being pushed north by the new vegetation as I left 4 and headed to 5. I saw that I would have to cut through the woods a few times, but I decided not to adjust south.

It helps to be familiar with this map, so that I knew about the good deer trails to get into 13.

I looked at my time when I got to 13 and was startled to see it was 53 minutes. I began to panic that I had skipped a control. But then I decided to see if I could make it back under 1:10, so I ran hard on the road to the finish. Just made it!

The overall times were fairly fast, but still this was a really good run for me. I haven't pushed hard in a long time. It didn't feel that hard, and I walked plenty of times. But Garmin gave me a 4.9 for aerobic effort and suggested that I rest for 70 hours. 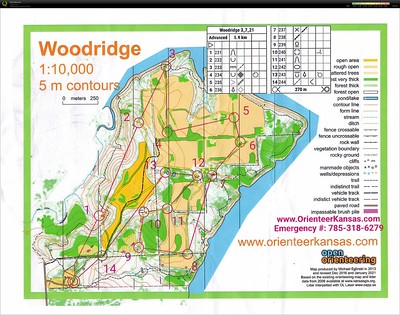 Warm and windy day was good for working at the event. We had a good turnout and lots of returning folks who had come to our other winter events. It sucks that our wood's season is so short.
C • Rest time 3