I'm not calling this a race because I never pushed hard.


My route as I remember it: 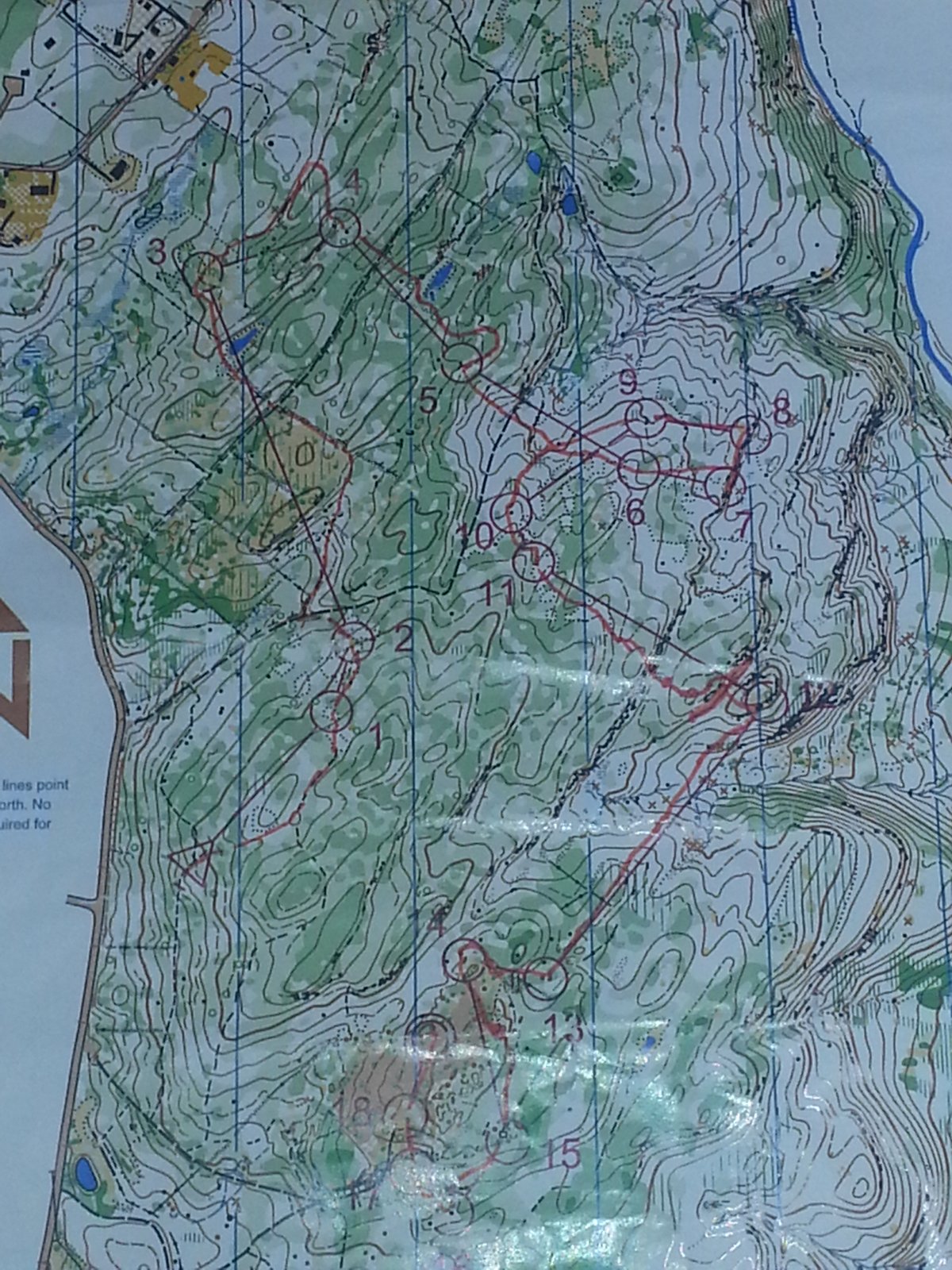 Breakfast at the dining hall was from 7:00 - 8:30 so we stayed in bed until about 7:45. It was warm outside but cloudy and judging by the runoff, it had rained a lot overnight. Forecast called for more rain + potential for t-storms for most of the day.

Breakfast was scrambled eggs (at least thats what they said they were), fried potatos and bacon. The eggs were weird. Very dense texture. Man refused to eat them. I wished I hadn't. Had me worried about the dining hall food for the rest of the weekend but the dinner on Thursday was good, so there was hope.

Buses had been arranged for transport from Dingman's Campground, about 10 minutes from PEEC, to the venue, about a 10 minute bus ride. Arena was about a 10 minute walk from the bus drop. Starts were back near the bus drop. Our start times were around 12:15 so with transportation and walking time we decided to leave PEEC at about 10:30. Worked out pretty well. We arrived at the arena about 11:10 along with intermittant sprinkles and heavier showers.

The arena was a long, open, rocky (crushed, gravelly rock) area along the top of a ridge. A number of easy-ups and tents had been set up to protect clothing and equipment from the rain. We stashed our stuff and walked around checking out the finish area, talking to friends from other clubs.

About 12:00, we headed for the starts. W, Y and O were at a location near the main trail, the rest of the courses had a start further away. Talked to Bman a bit at his start and then headed for my start.

Different from other A-meets, there was no start box. Your course run time was figured from your official start time. You miss your start, you're still on the clock. Good incentive to show up at your assigned time.

S - 1: Start triangle was at a trail jct 30m up the trail from the start line. the trail leading to the right ended quickly but pointed directly towards the control, straight along the hilltop. However, the pine trees got really thick, really quick. Found myself drifting way right below the hill and into a rentrant. Decided another indistinct trail leading to the control looked pretty good. Found the control pretty quickly after that.

2: Short leg through more thick pine. Low vis but I did manage to find the bag, albeit slowly. There was a control from another course very close by on a similar feature. I was checking codes so not a problem.

3: From the short time in the thick woods, trails seemed like a real good option. Decided to use trail and reentrant to get to open area and then ruined wall on NE end as a rail to the pond. Control was buried in more thick stuff.

4: Totally blew this one but managed to contain the damage. Ended up in a parallel reentrant NW of where i needed to be. Became suspicious of the wide 'knoll' to the left and so, went SW looking for the trail. Knew where I was when the trail wasn't at the top of the hill.

5: More thick veg. I'm a feature reader and reading features was damned difficult. I was starting to get frustrated. Not with my nav, but I was not really enjoying my time in the woods. Made it to the circle, but then wasn't sure, so contoured all the way around. At least the next few controls were in white areas on the map.

7: Ended up just a hair left. Didn't aim-off. Should have. But other runners were coming out of the control so didn't lose much.

8: Oddly easy given the rest of the course.

12: brain fart. I picked a good route, staying high along the hill tops. just didn't go far enough. I misread the contours east of the control as another UP when in reality it was a big hill DOWN. So I thought I was looking for two hill tops with a small valley inbetween, cliffs/rocks on both sides. My 'stop short place' meet all the criteria. After scouring the hillside I decided something was wrong and took a good look at the map. DOH.

13: route seemed obvious, redline all the way. I think there was a lady with a video camera on the big spur going up. That was strange and could have been a bit distracting, but there wasnt much technical going on there. More thick pine at the end of the leg. And it started pouring just after I punched.

14: Shouldnt have been difficult but the rain and thick veg had me down. The knoll on the W side of 13 circle confused me big time. I didn't see it on the map. And it was big on the ground. There was also bare rocky open ground visible and I didn't see any bare rock on the map near 13. Peeked around the other side and saw the finish area. Oh. Now I know where I am. But why is the bare rocky area mapped in yellow?

I'll say up front: NAOC was one of the best A-meets that I have attended. I wish we had the resources and attendance to provide an equal experience here in the midwest (St. Louis). Perhaps someday. In the meantime, I'm glad that OCIN/OLOU and OK/PTOC are providing a-meet opps within driving distance.

Because of the injuries and lack of training, my personal goals for the weekend were as follows:
1) don't get hurt
2) navigate cleanly
3) finish the middle and long courses under the time limit

I am very happy that I accomplished all three.

Our itinerary took us into LGA on an 8:00AM flight, which arrived in NYC roughly on time. We picked up our rental about noon, expecting a RAV4 but instead found a Yukon (what a tank!) and headed for Guy's neighborhood for some local Italian cuisine . One of those hole-in-the-wall, strip-mall places that you wish you had in your own neighborhood.

After some great pizza & fried mozzarella sticks, we left Guy (he hadn't finished packing yet) and made a bee-line for the Pocono Environmental Education Center (PEEC) in order to get out on the model map before dark.

PEEC was the event HQ, Sprint venue, and our lodging site. (We'd booked early, and went in on a 6 person cabin with fellow STLers Rick and Fran A., which i thought worked out really well. Hope R & F thought so too! :) ) We arrived around 4, picked up our packets, linens, and pillows and headed for the cabin to change into O gear and hit the model map. Rick and Fran had arrived earlier in the day and already done the model so Rick accompanied L & B on the more Yellow/Orangey controls while I did some of the Greener. I found some thorns, a lot of thick veg, and deadfall o-plenty on my part of the map, but after the first couple of controls felt quite comfortable with the map. Especially the contours and rock features, and so, except for the veg, I felt pretty good about the coming days.

PEEC is a center, run by the NPS, that caters to groups. They have cabins and lodges, yurts, meeting rooms, a dining hall, hiking trails, etc. The cabin we stayed in was a fairly new duplex. Each half had 3 metal frame bunk-beds and a bathroom in a 12x12ish room (bath room tucked in one corner of the shared wall). A very good electric/oil heater and a ceiling fan rounded out the amenities. After the nearby campground the next closest lodging was at least 25-30 minutes away on a busy, twisty county road. PEEC, with shuttle buses to the venues and on-site dining was a great choice.

I didn't get enough orienteering yesterday. Went with BMan and L to Hawn. Taped the Orange course for BMan. He did not have a good run.

Hung tape on the sprint at Hawn for Bman and L.

Good day nav-wise but I took myself out of the competition by forgetting my lytes in the car.