Squannacook River WMA, In The Dim. Still some sunlight when I started, and that faded into bright moonlight. After another warm day, but the snow conditions were pretty good. Mostly diagonal, a little double-poling, there were no ski tracks, but it went best when I was in the track that had been packed down by foot traffic.. One of the ski tails is delaminating again, not sure if it's the one I already glued or the other one.

Up to the NW corner or town and back, In The Dark. Well, not so dark, really, there was a good moon, and I brought a headlamp that I carried in my hand and had it in strobe mode a bunch of the time to make myself visible. It got over 50 F today, so I went out with two shirts and no jacket, no gloves or hat, and that was about right. The straps on this headlamp are a little stretched out, so without a hat it was loose on my head.

I was thinking that there was a little piece of New West Townsend Road up by the border that CityStrides had given me credit for, but that I had done only by bike, not on foot. So I went out to get it. If I had thought to check, I would have seen that I wasn't a complete dummy back on April of 2012, and I already done that piece. No matter, a run is a run.

Figure-8 around the hood, In The Dark. Actually not very dark, good moon, but I kept the light on to make myself visible.

No dealings with the snow that fell yesterday, it got warm enough that it just melted. I ran on the roads because I figured the woods would be slushy. The warm temps caused some melting that flowed onto the roads, and at the time when I ran the temperature had dropped below freezing again, so there were a few very slippery spots, but I avoided wiping out.

I bought a bird feeder a month or so ago, setit up outside my office window, and it's been pretty much ignored by the birds until the past few days. I also resuscitated Nancy's old Sony camera, which was pretty good in its day. So far, I know I've had tufted titmice visiting. 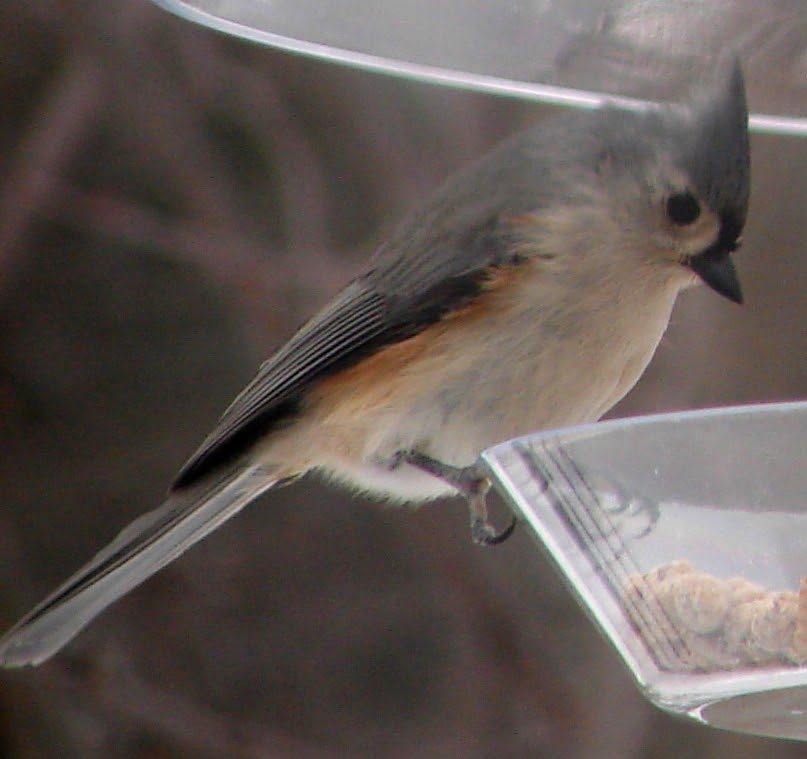 Hickory Hills Lake, In The Dim, on my hopeless skis. I drove around to the other side where I could park (illegally) and not have to carry my gear a long way, and about halfway there I realized that my headlamp was still sitting in the front hall where I had sat down to put on my boots. Oh well, it wasn't dark yet. It was snowing pretty hard (and had been snowing for a few hours), and that smoothed out the snowmobiled lake surface some, and it was skatable. Not fast, but skatable. I skated for a while, then switched to diagonal, and I'm surprised that the latter was almost as fast as the former. It did get hard to see after a while, not so much because it was getting darker as because there was a lot of wet snow building up on my glasses. The conditions were also getting slower as the snow got deeper.

With Nancy on Hickory Hills Lake (mostly), parking at the primary school. Surface was kind of lumpy from snowmobile traffic, and there were a surprising number of slushy areas. Not worried, since they seemed to be supporting the snowmobiles and ATVs, a few of which were out on the lake as well.