Squadron PT, led by the LT, who was channelling his security forces days. This session had a high cardiovascular component.

Maynards with Melissa, Jesse, and Aly. Good times, especially since it was about 60 degrees warmer than out east. 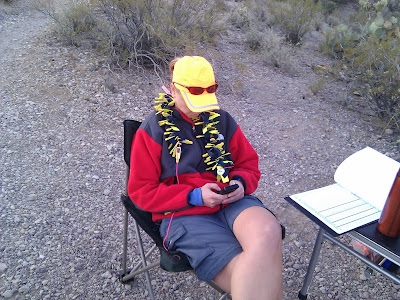 Also, this monologue is so funny I cried. Mandatory reading.
7 AM

I have decided, based partially on my soreness today, that yesterday's schlepping of awkwardly packed and heavy meet equipment the half mile up to the pass was an actual workout. Besides, it sounds like something Crossfitters would do.
8 AM

Putting out the last 5 controls, with a sense of purpose.

The meet went well, good turnout, and my courses were well-received. No real complaints, despite two "groaner" course setter moments (more about those in a sec). Melissa was the reluctant meet director, but she did great and was better prepared than most. Jesse held the fort during the initial registration rush and I think she was a bit surprised by the early morning assault. She survived and was able to then go and complete a brown course, so I'd say she's totally One Of Us now.

I learned two very important course setting lessons today. Both of them are embarrassing and could have been prevented had I not pushed off some of the work to the last minute. Fortunately, no one was upset and I attempted to graciously admit my mistakes as soon as they were discovered. In fact, it was such a non-issue that I considered just ignoring them and pretending that everything had gone perfectly, but I think they are worth sharing and remembering.

1. White course planning. I finalized the white course on Saturday morning, on my computer, just before printing. This is, of course, stupid, though I had visited all of the locations. I had not, however, ever actually gone around the white course as it was planned. Looking at the course, one might think that the slightly non-white legs of 3-4 and 4-5 would be the problem. But those were just fine, and some parents with white course kids especially enjoyed those legs. The problem was actually going from 1 to 2, where several people continued up the wash rather than on the trail as it branched off. There was an orange control in the wash, just a bit past white #3, and many of the white runners punched it, thinking it was 2, and then continued on in the direction towards "3". The unfortunate thing is that you can go a really long way in that direction, and some people did. Unbelievably, everyone came back smiling, even when they hadn't found all of the controls, and I was able to explain what had likely caused the confusion. A learning experience for all. Even so, it is really no fun to have DNFs on white, especially when a few streamers or a control flag or some explanation during the beginners clinic (which I gave) would have prevented them. Plus, I made the white really short so that adults could then go out on yellow... but those who were out over an hour on white weren't about to then embark on a yellow course.

2. Transcribing field notes to OCAD. The streamer and flag for Red #8 (also Brown #7 and Yellow #3) were exactly where I had placed the circle on the paper map I had with me when I was streamering. I'm looking at it right now, and I'm really annoyed that the circle on the printed maps is upstream, aside the next stream junction up. Thankfully the visibility is very high there and no one had any problems finding the control. A few people saved a bit of time because they popped out right in front of it, and a few people lost time because they went straight to where the circle is. But it is really silly that I just clicked the wrong spot and never checked.

Anyway, those are today's lessons. I will consider myself schooled.

Putting out controls for tomorrow's meet. Cutthroat dropped me off on the east side with Taco-A and then she drove around to the west side to hang the ones over there and streamer some stuff. I followed Taco-A to three controls to make sure she was comfortable doing the rest of her batch (she was), and then I set off to do all the northern ones. [side note: Taco-A is on the path to orienteering assimilation.] The timing was almost perfect - we all finished within ~10 minutes of each other! I saw lots of critters out there and lots of critter poop. My orienteering was fine, though of course I was the one who streamered the locations, so it would have been alarming had I had trouble.

All this talk of taconess made us hungry, so we afterwards we went to South Tucson for some taco goodness.

I feel much better today, throat isn't sore any more and I'm just a bit congested. Copious amounts of extra-strength Tylenol probably helped. Hopefully I'm almost better and not in the lull of a double-dip illness - lots of work to do before Sunday's meet.
C • I got some eucalyptus rub t... 1

Tonight's orienteering-related adventure involved going to the club storage unit to retrieve equipment for Sunday's meet and then getting stuck (with the car) inside the gated facility. Taco-A and I were only trapped for about an hour and a half, and we didn't quite have to resort to ordering a pizza to be delivered through the gate. After our escape we did, of course, eat some pizza. And laugh. Pizza pretty much makes all problems go away.

Definitely sick. Melissa "Cutthroat" Trout forbade me from going to work and infecting everyone else, so now I have all day to ponder the reasons why I may be sick. I'm hesitant to blame Taco-A(wesome) since my symptoms are different than hers, but it's still possible that I have acquired the same germs and my body is expressing different symptoms. I'm still working on a way to blame Taco-B but that is more of a stretch.
C • A Stretch 2

Uh oh, my throat is scratchy and icky this morning. Actually, it was last night, too, but I was ignoring it. Germs are stupid.
C • Germs ARE stupid! 6