Woke up this morning with very tender adductors and lower abs, I guess punishment for my run yesterday. Curious to know whether this is an acceptable level of discomfort or whether I need to back off on the runs. Next appt is Wednesday so hopefully I have something of an answer.

This (late) morning I headed to Sweetwater to ride while Melissa and Lukas visited the Botanical Gardens. Lukas can spend a very long time there because there's a model train of some sort.

Rode many of the trails I did not ride last time, plus some overlap, so I've covered most of them now. I can see why some of them are ridden primarily in one direction, though I feel like I'm not necessarily in good enough bike shape to cruise comfortably up some of the rockier trails that I went down today. We'll see. I do find the business of the trails a bit disconcerting, with people potentially around any corner. Not a problem at Fantasy Island with its one-way loop system.

This afternoon Melissa and I got our first Pfizer jabs, so it was a pretty good day overall!
C • Yay! 2

After a failed attempt at meeting other runners and being social this morning I did my normal PT running routine from home later in the day (post-pancakes and Lukas' tennis).

I went with increasing loop lengths today: PT exercises + 1km loop + PT + 1.5km + PT + 1.7km. I wasn't particularly looking forward to running because the last few runs have been more like trudges and it was depressing. Today, however, I was able to do something I would actually call running and it felt pretty good. I wore the brace and still had to concentrate on what I was doing but I didn't have to stop at all on any of the loops and I did feel like I was actually running. Very little discomfort. This is good!

The downside is that it is almost April and at this rate I don't think I'll be ready for harder running or trail adventures within the month. I have accepted slow, slow progress and am really hoping to be able to run hard and orienteer, etc., by October or so, maybe even for some kind of national event?

Afternoon outing to Sabino Canyon with Lukas. My brilliant plan to park in the overflow lot and hike from there was, indeed, brilliant—Lukas cranked along at something approaching 4 or 5x his normal pace. It's not much shorter to go this way but there's a lot more (interesting) trail and a lot less tram road.

We ended up below Sabino Dam playing in and around the water for a long time, right up against shadow/cold. This was a good outing for in that I don't recall any movements up or down or around to be problematic while walking, and I didn't have to shorten my stride or anything. 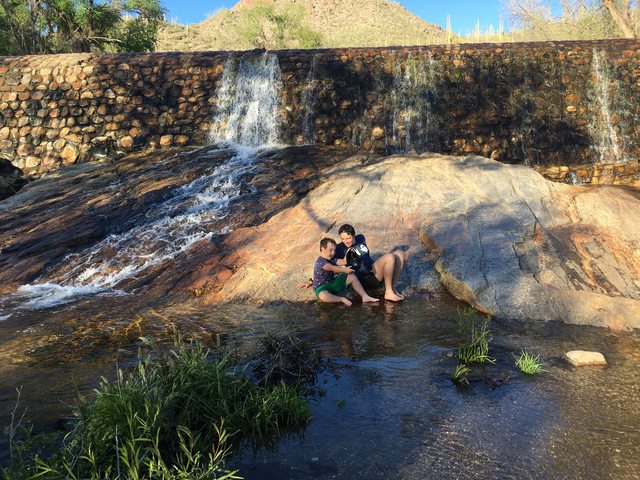 Melissa and Lukas running on the trail: 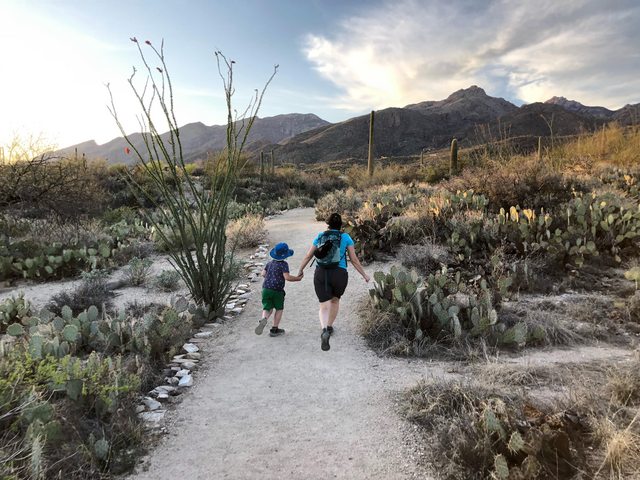 Taught another session of Learn to Orienteer today with Brucker (three homeschool families this time) and it went well. They seem busy so I'm not sure how often we'll see them at events but they are connected to our newest board member, so she'll keep prodding them. Afterward Jeff and I talked through some changes to compress the class a bit because it's still going over 2 hours. The zero prep/equipment plan is working well—I just show up with maps, nametags, and writing utensils and we're ready to go.

Since I was already on the west side I decided to pop over Gates Pass for a mountain bike ride. Parked on the backside and did a nice loop down to Ironwood and back up again. I neglected to read the reviews for the Golden Gate trail before riding it, which was probably a good thing because I might have avoided it had I done so. It's got a lot of steps, which I could mostly handle fine in the downhill direction and were (mostly) pretty fun. Wasn't going to happen uphill, but I also knew I didn't have to go back the way I came! I think the section above where I started is probably a lot harder and probably good for me to avoid.

The ride through the rocky upper stuff was not exactly what I was in the mood for on a Friday afternoon after a pretty rough week but the lower, smooth, swooshy flat desert stuff at the bottom was!

The last couple miles were a bit of a slog, going up on a gentle, mostly straight trail that was punctuated by wash crossing. I didn't have the energy for all the short steep ups by then. Nice ride, though!

There is rain in the forecast for this afternoon and that is a very good thing for the desert but it also means muddy trails->no riding. I managed to get myself out the door by 6:30, which isn't bad, but I'll need to do earlier to be able to link up with work people at 8. This morning I ended up doing two meetings standing at my desk in slightly sweaty workout clothes before I managed to sneak off for a shower. Not ideal, but at least I can do that working from home!

For the ride, I wanted to just sit and spin so I parked at the north side of Fantasy Island and rode the connector down to Bunny / Snake Dance / Bunny's Revenge. Chilly morning, relatively speaking (mid-40s) and I initially wished I'd had more than biking shorts and knee warmers for my legs but the sun worked its magic pretty quickly as it got above the Rincons. Quite a pleasant morning!

Ran 2x [PT + 1.5km loop]. Employing some patience and a lot of concentrating on various accommodations I managed to do this without much discomfort at all. I stopped several times on the first loop so that I could do a leaning start to make sure I was getting my feet under me and I focused on short strides and space between my legs. I'm certain that I am still not running very well, though, I can tell by my shadow that my butt still sticks out. But there's only so much hip-forwarding I can do—too much and my abs hurt.

I don't know that I'm making any progress but at least I'm still here.