Decided to take the western route, along Rt 89 from Ash Fork to Wickenburg for a change of pace and scenery. We took a long break at Watson Lake in Prescott for some walking, rock scrambling, geocaching, playgrounding, and lunching. It was our first time to Watson Lake, though I've been eyeing friends' photos and wanting to check it out for a while. 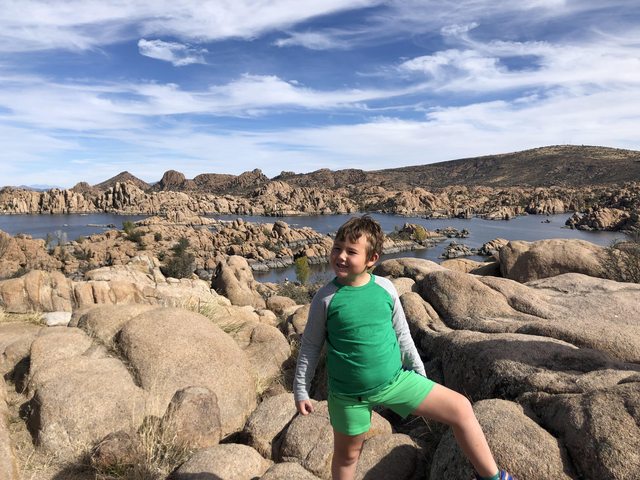 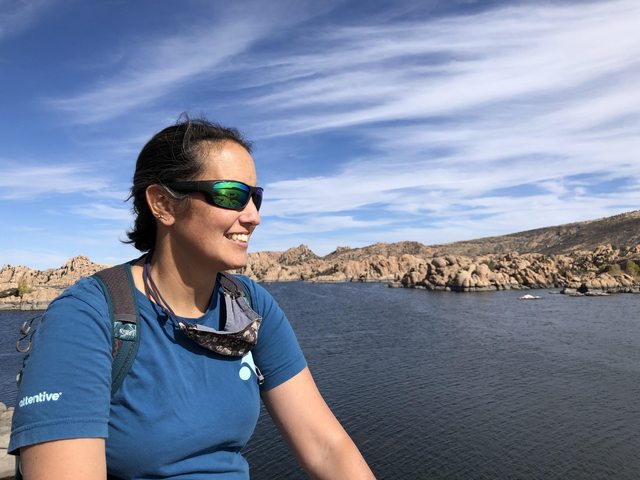 I guess it has canoe-o potential? 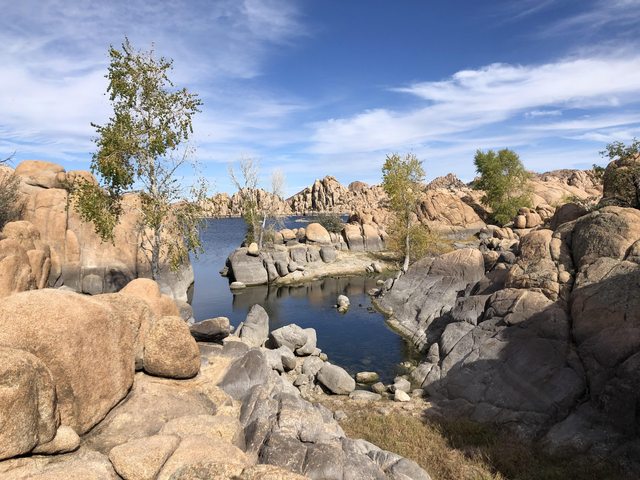 Hey, this went pretty well! I'm pleased at July Cristina for signing up for this and also for pre-paying the hotel stay at a place with a pool and an arcade. And at fall Cristina for managing to get in (barely) enough training to do this without breaking.

This is a 'trail' half marathon that starts and finishes in Tusayan, the town just outside the main south rim entrance to Grand Canyon National Park. There's no singletrack, it's mostly Forest Service roads, some rocky and somewhat technical and some quite smooth. It's sort of between a road course and a singletrack course. Up at almost 7000' the scenery is all pretty northern Arizona forest but there are no spectacular views.

We drove up to Tusayan last night and I got decent sleep. There was a "trickle start" between 7:30 and 9:00 and I had originally thought I'd go for as early as possible to avoid the sun. But then it was 33F at 7:30 and not mid-40s so I waited until 8:20, when it was probably still <40 but the sun was up more. I didn't want to be cold in shorts and a t-shirt at the start but the sun really works and I could probably have started earlier. I should trust my gut on the sun stuff.

Had a PB&J for brekkie. That worked.

Warmed up by jogging, walking, and skipping from the hotel to the start with Lukas and Melissa. It actually seemed like enough for the effort, though a little more probably would have helped.

Decided not to carry any liquid and instead drank gatorade and water at each of the aid stations (4.5mi, 8mi, 11.5mi). The first two were a good idea, the third was not. Got a stitch.

First part of the course is the most rugged, with a fairly beat up and rocky road and some ups and downs. It's first on purpose so people get to do it while they're fresh, which I appreciate, but also it's probably a much bigger deal for a road runner unfamiliar with trail running. Nevertheless, I was super surprised to be doing about 9s through this section.

The second part, starting about 4.5mi in, is on really smooth dirt road and drops very gently for a few miles. Kept under 9s for this bit, and I couldn't believe I was keeping up that pace, on dirt and at altitude and with the training I've been doing. Not complaining. Damian the mountain-biking-race-photographer seemed to be doing circles around me through here and that was fun. It was a little motivating to exchange words and smile and wave every ~1/2 mi as he rode by again.

The next section, from 7.5 to 11, is a steady, continuous climb, culminating with the steepest bit on the whole course. My speed of course dropped for this section but not nearly as much as I expected. A couple of 10s and then a 10:45 for mile 11, which felt pretty brutal.

Mile 12 was rolling and I alternated between, "weeee I still have legs!" on the downhills and, "oh no I can't go up again". I had told myself to think of it as a 12-mile race because the last mile is gently downhill on a paved multi-use path so I was pretty relieved to get to that path. But it wasn't really downhill enough to feel easy *and* there was a steep climb in the middle that ended up being the only hill on the course that I had to walk! Then there was a lot of course left after the mile 13 mark (thanks, Randy!), making for a tougher finish than I had envisioned. Looks like about 10:20 and 10:00 for miles 12 and 13, with a blazing fast 8:00 pace on the final .3mi.

Overall happy. My legs were achy and tired for the last several miles but that's to be expected. I feared in the beginning that I was going too fast but I don't think going any slower would have made the climb in the second half less difficult—it was just a long run for me right now and I only have so much muscular endurance. It would be a really fun course to do with just a little bit more fitness. I might be tempted to do it again but the main appeal is having a nice excuse for a family weekend at the Grand Canyon. The course is nice but not spectacular.

Randy got a couple shots of me at mile 11, just after finishing the cilmb: 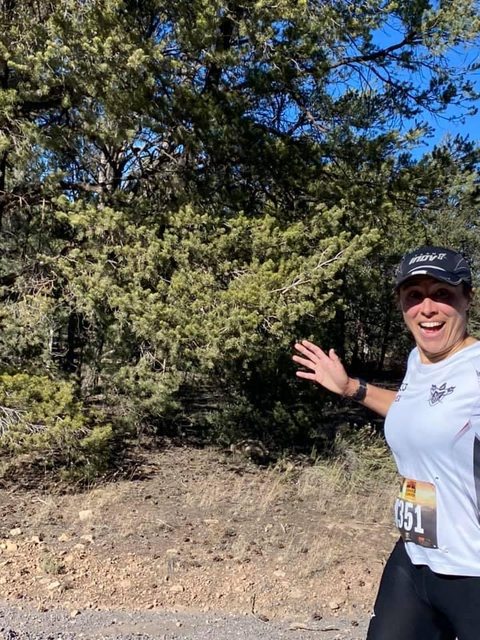 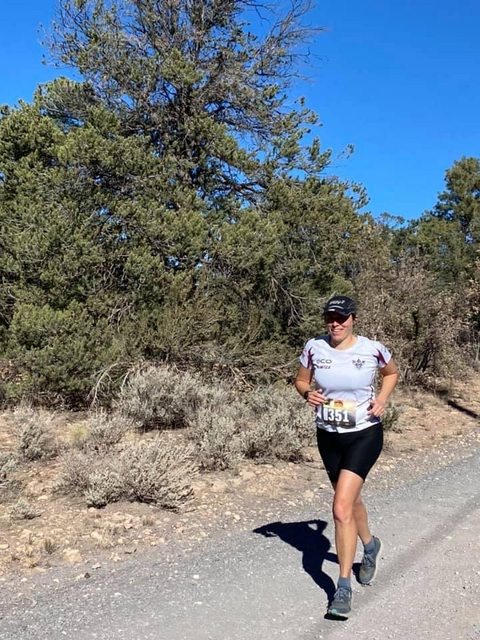 Doreen got this one of us at the finish: 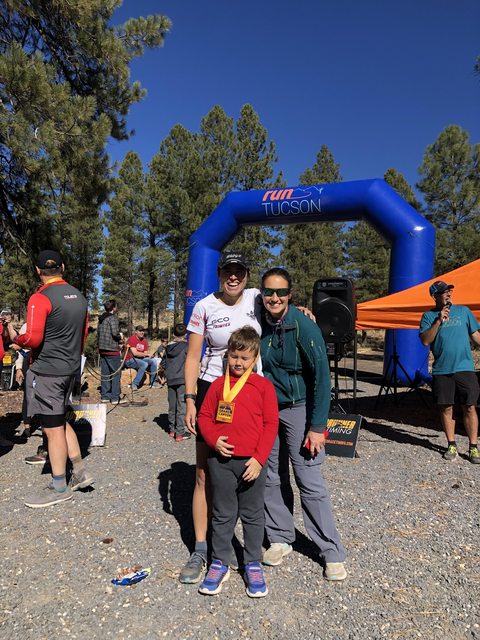 In the afternoon we headed to the south rim for Lukas' first visit to the Grand Canyon.

He was, initially, not at all impressed. 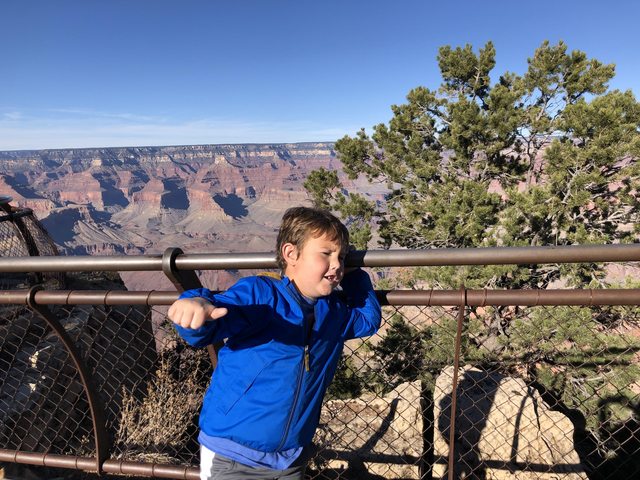 He did eventually admit that it was pretty cool. 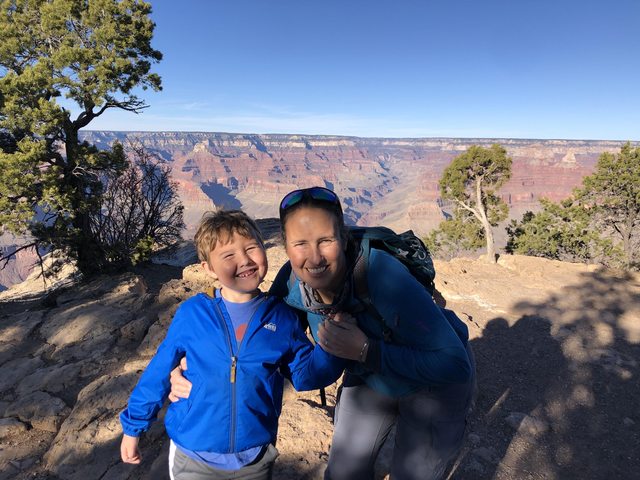 We walked from the Visitor Center to the Geology Museum along the Rim Trail and took in some views. Then we headed to Grandview and a bit of a drive around for sunset. 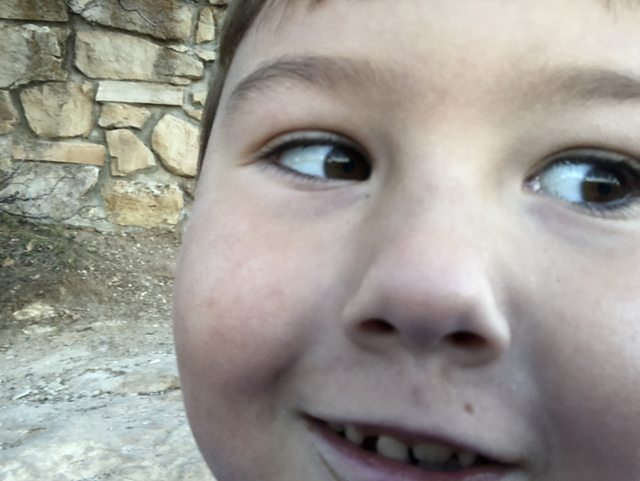 If you like running stories and cool footage of a great trail run then I recommend spending the hour to watch the documentary. I was already excited about the thought of being able to run BCL again soon but now I’m super motivated. Come visit Tucson and I might make you run it, too! (Just ask Bash.)
C • Great 2

Can't go to WOG tonight because I have my Improv 201 showcase so I decided to be a good girl and do something resembling tonight's workout on my own. Ran around the golf course with 10min steady state in the middle (rather than 2x10'). I'm running the Grand Canyon Trail Half Marathon on Saturday and it seemed wise to do something a bit quicker but I don't think I'm really doing the volume to support a full workout two days before a longer race.

Saturday should be fun but it will be hard and I don't know that it will feel that much like a "race". I did manage a 13 mile trail run three weeks ago, but my attempt to get in another long run the following weekend failed, so that's all I've got in the barn. I mean, I guess there's a lot of really old hay from all those half marathons and long runs in the more distant past, but I feel like eventually hay rots away or gets eaten by vermin and it's no longer any good.

In to work with a nice candy stash to share with the group. Grad students never turn down free food so I expect it to be gone quickly.
C • Your new job is... 11
5 PM

Home from work, midway there I had a sugar crash or something, probably from eating too much of my own candy.

WOG. I ate several handfuls of peanut butter pretzels right before biking over (via the tennis center) and wasn’t sure how running would feel. Amazingly it was okay. I didn’t push my luck, though, I put some effort into the workout but kept it constrained enough to make sure puking wasn’t going to be an issue.

Ran with Catie and Michael for the most part, which meant we talked about bike infrastructure basically the whole time. Or at least when people were able to talk. Pace was kind of all over, 1:45 to 1:55 for the 400s and 3:55 and 3:50 for the 800s.

Update from PT appointment. I didn't write down anything after the last one (one month ago), the summary from that one was that my adductors were great and I was cleared to do hip stretching again. I still had a bit of pain in my abs and it seems like a very tight quad might not be helping. That quad is on the same side as the ankle I sprained (in 2009!) which has more limited mobility. So, I was assigned some ab strengthening, quad stretching, and traction/mobility for the ankle.

At today's appointment there was no sign of ab pain in the exam (though I have still felt a faint bit here and there) so he's closed out my case. And I will close out my injury checkbox.

Still have work to do on my quads and ankles but it's all just to make things work better. Interestingly, I can balance fairly well on my left foot with my eyes open, perhaps even better than the (never sprained) right foot, but once I close my eyes the left is way worse. Time to train up for better proprioception on the left side. But also my calves are weak. There's always something!