To start of day 2. Temp still in upper 60s but a bit humid, with drizzle or light fog.

Off to the right to 1 on the broad spur, but saw folks to my left and went that way and found the control. Saw Allmuth Perzel on my way out, still looking for 1.

Couldn't make sense of hills/trails to 2, but eventually crossed the stream E of the bridge and made my way to it to get relocated. Okay from there, and fine to 3.

Swung west-ish to go to the left of gullies and reentrants, then turned north, hoping to spot the ride, but never saw it and lost confidence and track of where I was. Headed west to hit the fence near the edge of the map, and ended up seeing it (streamers on the fence strings) where it was in the east/west orientation, rather south of where I'd thought I was. Found my way to the fence corner and from there to the control, where I again saw Allmuth(!), and also saw George Walker. Allmuth started before, and George after me.

Didn't want Allmuth to try to follow me the rest of the way around (as she has done before), so I took off fast in an easterly direction, hoping to figure out where I was when I hit the big stream, but my head wasn't working right. Looking at the map now, I think I saw the flat wet area S of the line but couldn't place it on the map, and didn't trust my compass. Veered off too far south and east until I hit the obstacle course(!) I'd crossed on the way to 3, waaaaay south of the line. I corrected just fine from there, heading north up the trail and down the spur, crossing the creek in the non-green area SE of the control, the ran the trail until I saw the flag. That error alone cost me a good 10 minutes.

Settled down after that and had only one smallish error near 11 where I skirted the green blobs to the right instead of left and had to go back for it after I hit the ditch.

Lost my lead on Sandy and ended up third in F65 (Janet F had another decent run), winning (another) beer glass with the event logo. Congrats to Janet and Sandy! and thanks to QOC for another well-done event.
C • Took off fast... 2
Day 2 - Long - Brown - Splits

After showers first thing this morning, it stopped raining before we reached the Quantico base, and actually cleared up by race time (and warmed up a bit, into the 70s). Clouds came back around 1:00 but no rain.

For once, I started off well, and attacked off the spur under the dashed pirple line after running up the big trail to the high point of the spur. Waved to Peggy who was shadowing Samantha. Got across the stream (stepped into it to cross) and looked up and saw the flag...bonus!

Used mostly map reading with very little pace counting through 9, the got off line on the way to 10, and ended up circling around it after checking my position along the stream near the road. Probably ~5:40 lost.

Not quite on line to a couple others (3, 13) but not much time lost considering my overall speed. In this terrain it was best to go straight if you could, and adjust for the vegetation as needed.

Visited a cliff control from Green course of 25 years ago (the map I'm using), and photographed a boulder control from across the reentrant. Saw birds, and big cats, too. ;-) 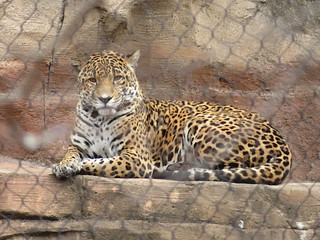 In the meantime, here's a similar photo of one of the big cats. Also saw robins, cardinals, blue jays, and something that looked like a phoebe/flycatcher (but the pic is on my camera, in NJ).