More streets and nodes for CityStrides.

Low 70s and sunny...this is November? ;-) It was odd to be in a T shirt and see the Christmas tree/decorations up at the Promenade Shops as I went by.

Also...hooray! We have a new president!

MtB trails at West End Regional Park (WERP). Temps were onto the 60s by the time we arrived, so wonderful riding conditions...except for all the leaves on the trails disguising hazards/obstacles like rocks and roots and downed branches, one of which took me down early on. No falls after that though I did a few foot downs and walked the bike up some short, steeper sections on Roller Coaster. Legs were on the tired side... (Forgot to start my watch until a few minutes in, so I've adjusted time/distance.)

Checked out the trail that had a downed tree (actually, a cluster of birches) as of yesterday... someone had already been there to chainsaw it and move that part off the trail. Nice that they have a Facebook site to keep riders informed.

Stopped to eat a sandwich before heading out again.

The reported climb seems quite bogus.

A stroll after we got home to get more steps in, but I wasn't trying to set any speed records. To the park and back. Still in the mid 60s as the sun was setting.

Lots of kids (a couple dozen, anyway), on bikes, scooters, skateboards and rollerblades, plus a few runners and kids playing basketball. What a wonderful day to be outside.

Did some streets in another part of town starting from Station Ave, and returned to parking via the rail trail. Saw a monument to a no-longer-existing bridge across Laurel Run called the Centennial Bridge which used to connect Station Ave to Rt 309 (Quakertown Pike?) across the creek. 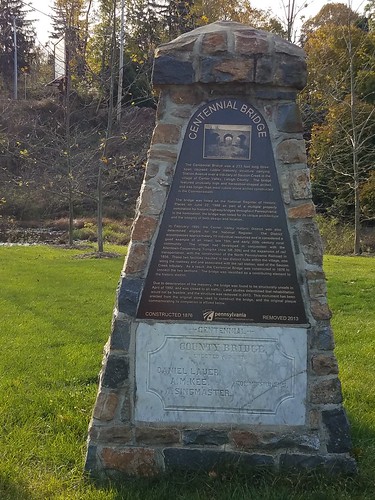 Saw these very large erratics (at least 5m tall) somewhere on one of my routes. ;-) 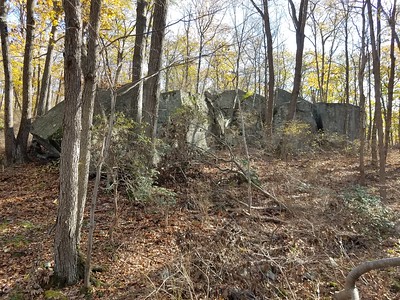 Great to be back in this terrain though the blueberry bushes are getting higher, and "indistinct" trails I crossed are pretty much invisible (except for the one between 3 and 4). Slow going on the downhills and rocky areas because I was favoring my ankles (wore Active Ankle on left; taped the right), and I walked rather than jogged. Messed up a bit on #3 (hit a rocky/rocky ground near edge of circle short of the control and relocated) and a lot more on #8 (bad route; should have crossed the stream and hit the trail then contoured in). A bit confusing looking for #7 because there seemed to be more cliffs than mapped, but I found it. Flag at #5 was visible from a distance on my approach. About 13-14 minutes of error.

A nice day in the woods.

My route is on RouteGadget

To my polling station (the firehouse next to our community) to surrender the mail ballot I had requested, and to vote.

And back, stopping to take a selfie with my "I voted" sticker (and pearls for RBG). 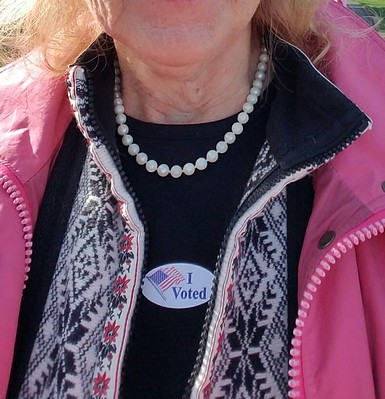 Walking combined with adding streets in my township. About 53-54, light breeze, sunny. Beautiful day for a walk.

Not a great course, map didn't reflect vegetation level (or trails in some cases), crappy woods, and awful navigation on my part. I found the first 6 of a potential 11 controls, and only 5 of those 6 cleanly. Three of the first six (1, 2, 6) were white/yellow level. Did the first three okay, but did not do well on bearing going to #4 and circled around through the buildings and trails. Did okay to #5 but took my time getting into and out of the reentrant in the midst of rocky ground, where the rocks were covered with slippery moss, because by this time it had started to rain lightly (rain continued until well after I finished and changed). Okay, though slow, to #6.

Then I had a choice of climbing a trail to attack from 20m higher than the control and 200m away--from a potentially bland attackpoint--or try to contour 450m, to a charcoal platform in a somewhat distinct reentrant, through saplings and/or rocky ground. I chose to contour, but think I didn't go far enough or low on the hill enough, and got pushed around by the vegetation, so I never found anything looking like what I sought, and I was getting wetter and colder. At that point, I stopped looking and attempted to navigate due east to the N-S trail between 8 and 9 (never saw #8 either) but again got pushed around by vegetation and hit the trail well north of where I expected to. I attempted to find #10, a circle ditch 125m off the trail in supposedly white woods, but almost immediately came upon a large downed tree I had to skirt, found other orienteers still looking for the control (I think we were all too far east), and looped back to the trail to finish coming back to parking, all of which took a couple minutes longer than finding the first 6 controls. A cold, wet, demoralizing day.