Just a short walk, from Franko Park, to get out the kinks from yesterday. Two streets for CityStrides in Salisbury Twp. About 64 and cloudy, not much breeze.

A few stops to photograph violets and the stone designs someone is building at the end of their driveway, where a broad flat "bare rock" outcrop sits. 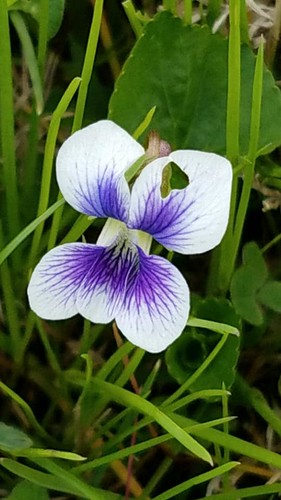 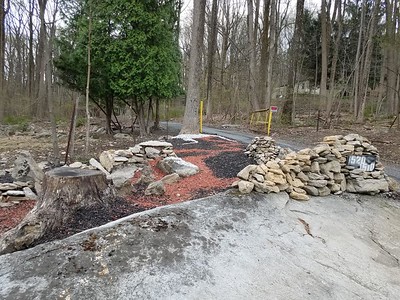 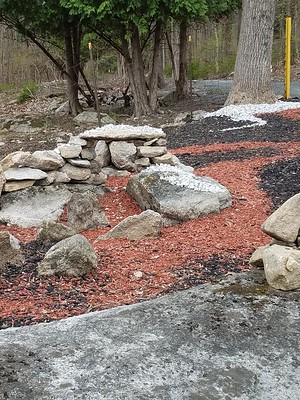 Forgot to note: we saw an eagle fly across I-95 on the drive down, somewhere north of Baltimore but south of the Chesapeake Bay/Susquehanna River crossing; I think near the Big Gunpowder Falls River crossing. Pretty darn cool.

QOC Lake Needwood Brown course, nominally 4.6 km and "115m" of climb (hah). Less than three-hour drive down via I-95; sunny with temp. in upper 50s when we started, mid 60s when we left. We had nice chats with the Worner-Kohns (visiting the area for a couple of reasons) and Peggy D. Panera for dinner outside Lancaster on the way home, staying west of Baltimore and DE. Nice excursion, but I'm not sure I need to revisit this map any time soon.

Control points were easy to find, but the course was physical (perhaps a bit much for the Brown course). I tried to angle up hills as much as possible, but some sidehilling was required in some places. Course designer was Mihai Sirbu of QOC.

The only mistake, perhaps, was my route choice from 4-5 to cross the dam (adding perhaps almost 200m extra distance) rather than chancing the vertical green between me and the bridge over the stream; that cost me several extra minutes. And my route around vertical green on the hill down to the road I crossed between 5 and 6 might have gone wider than needed. Attackpoint gives me more error but those were the hill-climbing legs, and I can't climb hills very fast.

At #6 the flag was mostly hidden by the tree on which it was hung, but I caught a glimpse of orange where I expected the boulder to be.

For #8 the circle was around a jumble of rock on the steep hillside (several boulders and two "cliffs", with the control description being boulder cluster, in the middle). :-D I basically just went where everyone else was punching as there was a bit of a crowd there; some had climbed straight up from the stream crossing, but I angled up from an earlier crossing.

Pulled one 1/4" long barberry thorn from my knee when we got home, from the stream crossing between 6 and 7.

Burkhart Preserve, because it was cloudy, low, 50s and breezy from the NNW, and because it's just about time to see toadshade trilliums. I was a bit early as they're not quite in bloom, but close. 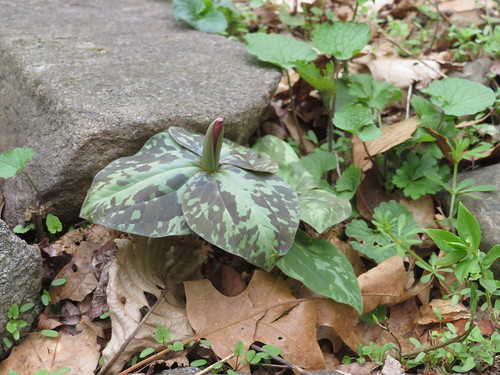 Local walk aborted by rain showers. I wore rain hat and raincoat, but it was too unpleasant, so I returned home.

Glen aborted his intended run, too, so we decided to do yoga.
Deanna's Awakening your Roots level 1/2 class.

Next Town Showdown badge for CMTR spring challenge. I visited Bethlehem and did the Victorian Houses (industrial leaders' homes) audio tour downloaded from Historic Bethlehem's Heritage Trail, plus walked by a few of the older Moravian buildings and Hotel Bethlehem. There's a separate Founders' tour I'll do some other time.

Bethlehem was founded in 1741 and many historic buildings date from 1742 after the Moravians built them (schools, separate communal homes for men and women and married couples, church, etc.) for their exclusive community members. It was some time before they allowed non-Moravians to settle in town, but eventually they did.

Bethlehem Iron Company (later Bethlehem Steel) began in the mid 1800s and before the turn of the 20th century wealthy industrialists built huge homes along Market Street. Many are now included in one of the first National Historic Districts in the US, meaning the houses are protected by various guidelines. A number of the mansions are now broken up into apartments and house any number of families rather than one large wealthy one plus servants. Near one intersection I heard about the homes of three siblings of the Dodson family. One of them is now a funeral home. About Weston Dodson and his brothers
Photos to follow...

I guess Hometown Highlights will be around home...not nearly as interesting scenery or grand houses (though if I climb the hill far enough there are some mini-mansions, comparatively). About 60 and cloudy with a cool breeze.

Park and neighborhood. Low 60s and cloudy. It had showered off and on earlier so I wore a raincoat (over a singlet) but it didn't rain.

Saw Glen at #2 (he was coming in from 1), just before we both reached it, and then again on the way to 4. He did all the ones through 11 while I skipped the legs out to 7 and 8 (and the trip back), and he caught up again on the way into 12. I took a better line to 13 (which he eventually found too) and had "punched" there when he appeared on the ridge above me, as I was deciding how I'd do the leg to 14...dogleg back over the ridge to go around on the trail, or take the adventurous but potentially tricky route on the slope above the highway. We both chose the adventurous route. :-) He waited for me at the finish.

Much more fun than the first time here where I trouble wrapping my head around the size of the hills! Good thing we had blown up the scale to make things more readable. Good times.

And back to the car.