NEOC BYOM Brown course at Earl's Trails in Northampton, 3.6 km with 180m of climb, set by Phil B (thanks!), with flags, even! I might have tried the Green, even after my unfinished course at Moreau yesterday, except that had even more climb, so Brown it was.

Warmer and more humid today than yesterday; low 80s when we started and upper 80s by the time we departed. I wisely used a bug repellent with DEET today, though the mosquitoes didn't seem quite so bad. While there were a number of cars in the parking lot, and we saw a number of bikes there too, I didn't see anyone but Glen on any of the trails I was on until near the end.

Started off heading for #7 and got there but noticed it wasn't the code I was looking for (193 instead of 181) and realized what I had done...d'oh!! Found #1 okay once I was on the right track.

Then the 12-contour slog up the hill to #2 (195), which was an easy approach once I finally finished the climb. I think I saw Glen headed away (it was his #4 and he'd started a minute ahead of me)...at least, I saw a white shirt and who else would have been near the boulder? Saw him again at 3 (186), then he was out of sight.

Managed okay for the rest of the course, though when I popped over the hill to #3 I didn't hit the right reentrant on the far side and had to skirt around the rocky ground to reach the flag. Of course, at the end I'd already been to the last control so it was easy to recognize as I approached, though I didn't exit it to the trail I expected to, reaching the lower one and having to climb to the start/finish trail junction. 16 oz of half-strength Vitalyte rejuvenated me after I got back to the car.

There were times where I was expecting trails but did not see them in the terrain, but it was easy enough to read the terrain to get me where I needed to be.

AOWN notes for today: On my correction between 7 and I I saw a pink lady slipper; between 3 and 4 I avoided stepping on a garter snake, and on the trail to 6 a toad hopped across in front of me. 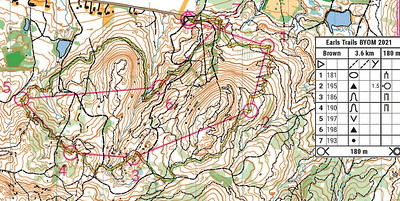 To start of EMPO UsynligO Green 5.5km course at Moreau from Spier Falls Rd parking lot. Mosquitoes swarmed us as soon as we arrived, so I applied a natural insect repellent (citronella, lemongrass, etc). It didn't help much, which made today's experience a bit less pleasant than it could have been. Temp was probably mid 70s when we started the hike up.

We stashed a bottle of Vitalyte mixture, and extra water bottle, and a couple of granola bars near the start, then prepared to go.

I had high hopes for this course, because I know I need to be slow and careful on the plateau, but after the first three I didn't do as well as I hoped. (Forgot to start watch until partway to #1.) Looped around to 4, where the map didn't match what I was expecting, but eventually found it. To 5 was a short leg. Then to 6 my plan was to head north-northwest-ish to the trail, cross the dashed stream and head to the control, but apparently I stayed in the first stream valley and hit the trail at a different location than I thought I was. I was heading more N than NW, which explains why it took SO long to hit a trail. In fact, by the time I followed the trail a bit and got to somewhere I recognized, I was 150m north of #11! Somewhere along the way, knowing I wasn't going to find #6, I had switched to Score O mode in UsynligO.

Found 11 and 12, and attempted the leg to 13 but lost confidence before I reached the E-W trail and bailed. Finally asked for a direction and distance hint (then two more) to the nearest control, which turned out to be the last control, #51. I headed to the finish from there, intending to text Glen that I was going to go on the path to the Vista (assuming he'd finished and had gone out again, looking for controls from last fall's course, as he intended) just to keep moving and minimize mosquito damage, but he had finished about 10 minutes earlier and was still there; he had checked where I was on the app, and heard my phone play the finish fanfare.

He said there had been few mosquitoes around until I showed with my entourage. I blame them for my doing poorly (I can do that, right?), and would have enjoyed this much more in fall conditions with no bugs....

I was a meet worker at the two A meets and the Billygoat; we also did some training that Alex Jospe had set up, and I'd vetted sites and done a couple of test Brown courses for Glen while he designing the A meet courses, but I've never actually finished a competition there.

Congratulations to anyone who finished the course(s) no matter how long it took. :-) And thanks to Grant who designed it. 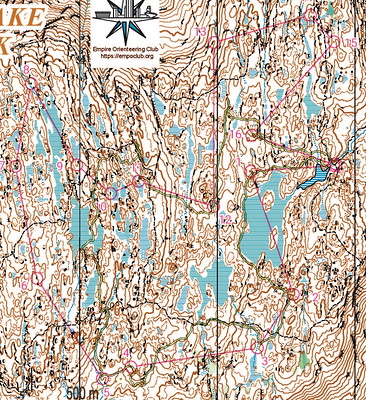 Back to the car. Mosquitos still around me but we moved a bit faster than I had done on the course, so only a few landed and were quickly dispatched. The sun was shining in the parking lot so they didn't bother us much while we changed. Car thermometer said it was mid 80s (and it was near 90 by dinnertime (we had dinner with son and daughter-in-law in the area, who we hasn't seen since early 2020).

When we got back to the lot, a young fellow had just arrived, saw our EMPO shirts, and asked "How was the orienteering?" We had a nice conversation with him and learned he'd recently moved from GA (where he learned O) to southern New Hampshire, not far from the Harris Center. I hope he managed okay. ;-)

AOWN: bird song (wrens?) and I saw three fringed polygala flowers, two near 4-5 and another in the northern part of the map...somewhere.

After dinner (with our younger son) we cruised East Greenbush, visiting old haunts and seeing what's new. Maybe we'll drive by the old place tomorrow on the way to Earl's Trails.

EDIT: Forgot to note the relatively large dog tick I removed from my right leg (under the knee-high socks?!?) that I discovered when showering.
Green - Splits

After-dinner walk around the neighborhood when it felt much cooler than earlier. Mid 70s...nice.

To the firehouse to vote on state Resolutions, and back. (Forgot to stop watch when we got there.)
2 PM

Frenchtown Preserve bike trails in Frenchtown, NJ. (This map doesn't show much of the trail network, which you can see on the OSM or OpenTopo version of the map.)

Sunny and upper 70s, but fairly dry so a really nice day to check this place out. I did a lot of hike-a-bike up hills but also was able to ride a bunch more than I thought I'd be able to. I made a homemade map holder with velcro and a plastic bag, which worked great to hold my map. :-)

Still, there were a few times I wasn't sure which junction I was crossing. Made it back to the car mostly unscathed...I'd tumbled sideways early on and had to extricate myself from a small barberry bush (there were ferns too, but I happened to land in one of the few barberry bushes near the trail).

Not super high on my list of places to return to, but I'd ride there again.

Saucon rail trail walk with Glen, including a couple of side excursions. Mid to upper 70s; the rail trail is mostly shaded. I hadn't been on it since late winter (March?) when there was still a bit of snow/ice remaining.

Birding at Jacobsburg, instead of heading east for frustrating orienteering at Quail Hill Scoit Resv. in NJ. Still a bit frustrating, because I saw and heard yellow warblers but couldn't get a photo of any of them. :-D First catbirds of the year. Took more photos of flowers than birds. Low 70s and overcast.

Moved to a different parking lot to take a trail down to the Bushkill, but it started to rain just a bit, and I heard thunder, so headed back to the car after seeing nothing interesting at the creek, and then home. Heard one more thunderclap on the drive home but was out of the rain within a few miles.