Brown course on DVOA's Fair Hill Mason-Dixon map for the mid-Atlantic Champs. This course didn't get close to the state line (farthest north control was about 800m north). 3.7 km, 135m climb, 1:10000. It was mostly cloudy and upper 40s when we started a bit after 11.

As usual at Fair Hill, courses tend to jump from wooded section to wooded section, with runs through fields in between. The grass in the fields was knocked down but not cut short, so it was a bit "sloggy" at times. I started not long after Jim E. and passed him on the approach to 4 after he got confused by another control nearby (on a stream bend within the control circle, but not on a rootstock). He wasn't far behind at 8 and punched 9 ahead of me but then bobbled leaving the control so I finished several minutes ahead of him. Got my feet wet on my final approach to #10. Only non-spike was checking out the bag on the stream bend (near #4). I suppose I could have gone straighter on the approach to #7, but was avoiding a steep climb.

Finished second in the official Brown Female category (i.e., running your age class's course), well behind Peggy D. who finished in about 47 minutes, and I earned 8 points for DVOA in doing so. I managed to beat all but four of the official Brown Male runners (for bragging rights).
1 PM

First leg (of three) on a DVOA 9-point relay team with Glen and Dim Paulau (and daughter who runs with him). This was described as white/yellow level, with control descriptions spelled out. 1.9 km; the 80m climb seemed like a lot, but I came in near the time I predicted for myself (25-30 minutes). Based on my time I guessed Peggy, who started at the same time, was about 16-17 minutes; she was closer to 17, she said.

A bit of a bobble out of #1 when I missed the trail and went 20m down the wrong one before heading back. Caught Florence between 2 and 3 and led (except for across the field between 3 and 4) until the final control, after which she sprinted into the finish. Everyone else was way out ahead of me from the start, except for some kids who started late and passed me. Sam K, who was on 1st leg of a 3-pt team and started 14 minutes after I did, passed me at the last control.

Glen says we finished 9th overall, and earned 8 pts for DVOA (1st place was 60 pts, I think) in the relay.

Mid-Atlantics scoring system below. The first three teams (a 3-pt, a 6-pt, and a 9-pt) today all finished within a minute or so of one another; very nice handicapping. 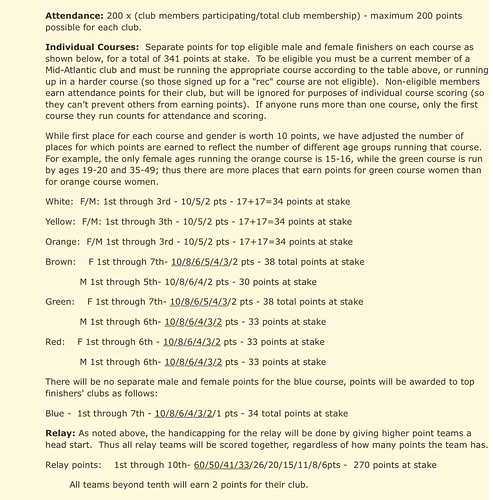 Park and neighborhood. Stopped our watches early when we saw a hot-air balloon, and then another one, not far from the community. One of them I'd seen before, down in Coopersburg.

"All in the Joints" video from Deanna.

"Race" around the block with both grands, but as usual we had some stops and slowdowns. The fire hydrant's extension-on-a-spring-for-visibility is a favorite plaything ("barrier" or gate) with this crowd. Around 70 and mostly sunny.

Jogged around the block w/ A. Mid 50s

WCOC bring-your-own-map training at Wooster Mountain southwest of Danbury, set by Joe. Brown course, nominally 3.7 km (no climb stated). Overcast and low 40s when we started, with some light breeze; a few sprinkles when we finished.

The length was right, and I spiked them all (7 controls plus the finish), but it was slow going due to large amounts of rock on and off the trails, and steeper climbs (up and down) than I'm used to, plus my legs are already toasted from the past two days' courses. Some flags seemed to be a bit on the hidden side, or unnecessarily hard to get to, but they were all where I expected to see them. I almost bailed after #6 because I was cold and tired, but decided it was good training to keep going.