Glad we got off the track early, we picked up the hire car in Hobart and went to the top of Mount Wellington. 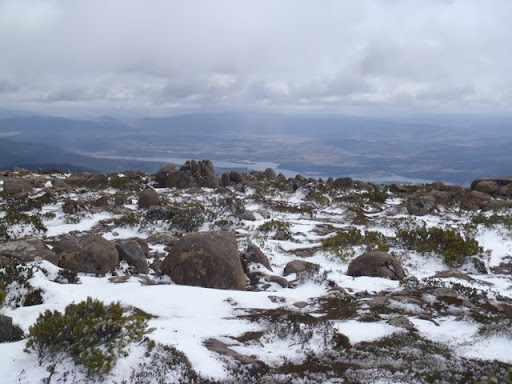 snow down to 700m el across the state today.

And Kanren was sending us texts about how hot it was at home. this helped: 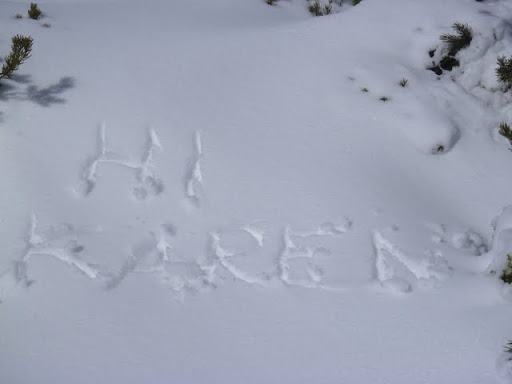 Summary.
Whilst it didn’t change my opinion that walking is a sub optimal method of covering ground I did kinda enjoy the trip. My magic limit in rogaines is about 9 hours before I get completely sick of walking so keeping each days efforts less than that meant that I only suffered a little bit. Actually, I had no blisters and the body felt much better than it did at the end of the trip than it did at the start. And after a few days back at home training it feels worse again.

It is a very scenic area to wander through as well, I haven’t spent much time at any sort of high elevation so the differences in flora and fauna were interesting. The roos were a lot smaller but the possums were so much bigger.

Logistics
Red eye flights suck. It took days till I felt like I was over that.

The pack weights were decent I think. The pack was an issue for the first two days but I just got used to it after that and even with a Rach ankle induced pack reshuffle on the fourth day the extra weight wasn’t a problem.

Shoes,
We got away with just wearing normal trail shoes and even though they got drenched through it was nice to have the ankle movement for the climbs up the mountain when we were really scrambling. All the tree roots across the track in a lot of sections meant that a bit more support would have been nice through there. My original plan to wear my goretex Salomons got turfed since it was too hot to do any walking in them before hand.

Food:
I think we did pretty well on the food for the most part and with approximately 10 kilos for 7 days we got the volume pretty close. Some notes:

Bad
Instant porridge packs. Each serve is too small and they just don’t taste very good.
Reliance on tuna/salmon packs for lunch, I just got bored with them.

Narcissus to Lake St Clare
We had a fairly healthy discussion about whether or not to catch the ferry but after Rach insisted on doing the walk properly (OK, she insisted it when she was in the comfort of the couch at home) I decided to agree with her and pushed to finish the walk.

Due to the storm front overnight there was lots of puddles all over the track and a few trees down completely blocking sections. We were wet through after about the first hour and a besides a quick stop at Echo Point to have a cup a soup we maintained a pretty consistent and determined pace to get out. The views were pretty much non existent and I wouldn’t recommend doing this bit, it would have been much nicer to do Pine Valley instead. But slightly dangerous due to the exposed climbs.

We were both happy to see the signs of civilisation though the last 2 kms of bitumised track was tough on sodden feet. I did feel good enough to run the last bit in still and I dangled a bit of chocolate in front of Rach to see if she would do the same but it didn’t work. She still got the chocolate somehow though.


Not many photos of today since Rach wouldn’t stop and take any, I did pinch the camera off her for this one though: 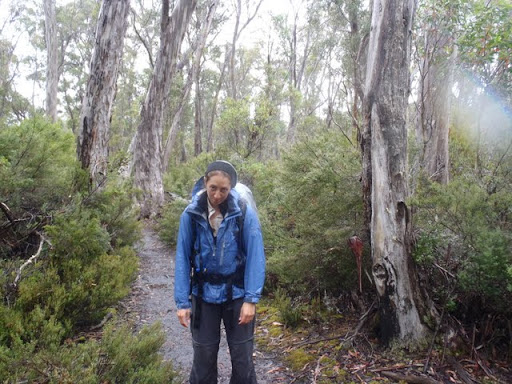 Are we having fun yet?

Once we got to the lodge we paid the exorbitant fee for a cabin and delighted in a hot shower .I then hit the tourist desk to buy a new shirt since the one I wore for the duration of the trek was approaching sentience and I didn’t want it making any jokes that were funnier than mine.

Kia Ora to Narcissus including D'Alton, Fergusson and Hartnett Falls

Speaking to the ranger at Kia Ora he warned us that there was some pretty nasty weather on the way in and it would not be safe to do Pine Valley with the Acropolis and Labyrinth trips so we made the call to cut the walk short by a day and get out. Some of the other groups made the big call to get off the track that day and ate all their food just to give themselves the extra motivation to make it. 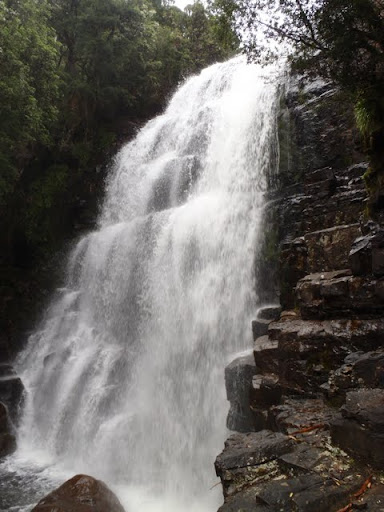 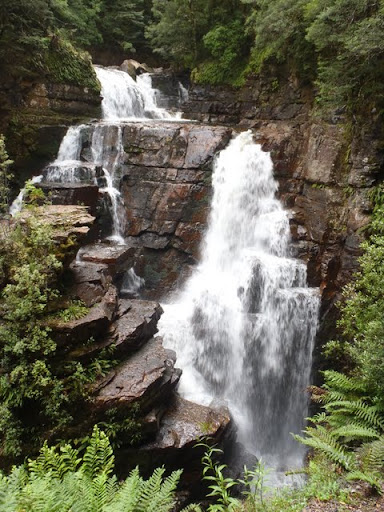 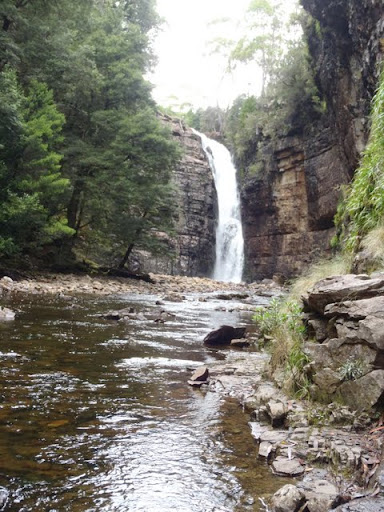 We got to Windy Ridge hut in time for lunch then kept going down to Narcissus. We met a tourist who had just walked in and up Pine Valley for a couple of days. I made Rach take a pic of him not because of the 4 man tent he had strapped to his pack but due to the normal kitchen saucepan he had hanging off the other side. He did clank as he walked which was quite entertaining. 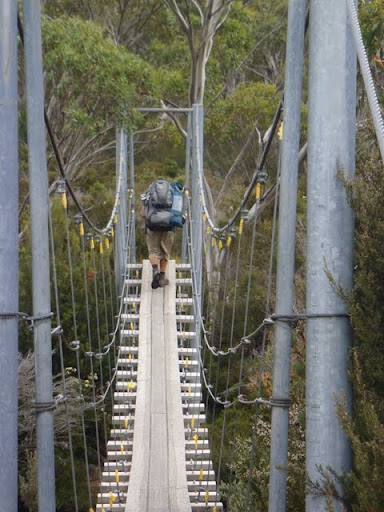 We got down to the fairly dingy Narcissus hut and even though we knew rain was coming in we decided to camp. We found a nice flat spot and set up for the night. The rain came down almost exactly to schedule at 3am but other than the noise it was all pretty comfy and dry in the tent, until the nice “flat” spot we chose proved to actually be the lowest point in the area and all the water began to pool under the tent. To give the tent full credit it didn’t let any water in but it was getting a bit disconcerting as we started to float. By about 6:30 we had had enough and bailed for the shelter of the hut.

Pelion to Kia Ora
We woke up to even worse weather than the day before so we had a luxurious breakfast of pancakes and coffee (oh yeh, we were roughing it) then sat around for a couple of hours waiting for the cloud to lift. We eventually gave up and started walking. The highlight of this day was meant to be the side trip to Mount Ossa, the highest point in Tassie but when we got to the turnoff we couldn’t see squat so we decided not to bother going up. In the brief clearings between showers we did get some nice views though. 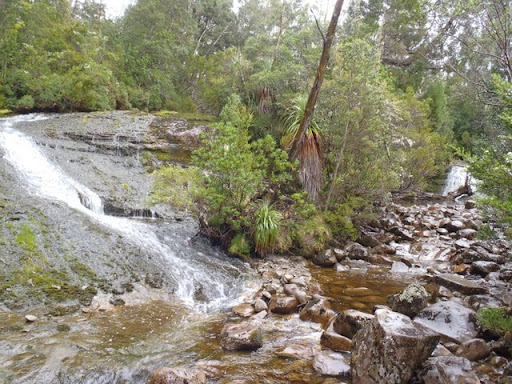 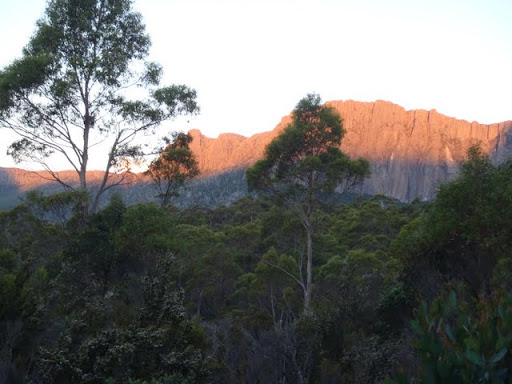 We got to Kia Ora just as the rain stopped for the day. There was a group of boys already there that had bumped into one of the guided tours earlier in the day. These bludgers just carry a small pack and get all their food, wine etc provided for them at private huts with hot showers and actual beds. Whilst it is admittedly cheating it still didn’t sound like a bad idea. Anyway, they also fresh bake their own bread every day so these boys managed to scam a loaf. And we got to watch them eat it all. sigh.

It was also at this hut that I did the stupidest thing of the trip. Even though I had stopped wearing my icebreaker kit I was still pretty itchy and with only one non wool shirt left I was pretty smelly too so I decided to hop in the nearby creek for a wash. This creek was one of the special sort that when you first hop in you don’t think it is too bad. Only because it is saving up a special punch for when the initial numbness wears off. I apparently squealed quite loudly at that point. After I got out I realised what happens when you rapidly cool your body when you have a skin irritation. You get itchy. Really really itchy over your whole body. It wasn’t a peasant couple of hours after that.

But eventually it calmed down to only a major irritation and we set up camp on a platform looking over a lovely valley for the night. We had to be pretty quick getting in and out of the tent though due to the mossies and we woke up to discover that they HAD all seen Alfred Hitchcock’s The Birds 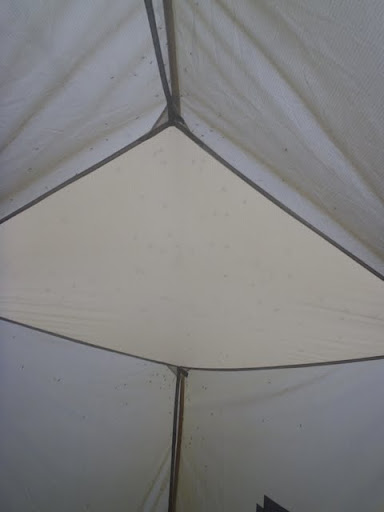 I was damn itchy this morning and I suspect I am developing an allergy to icebreaker stuff. Which was a bit of a problem since most of the clothes I carried on the trek were icebreaker. The odd bit of rain was rolling through but nothing serious so we set off in the low cloud across some pretty spooky moorlands. Which then did a step change into rainforest. The vegetation didn’t believe in transition areas, it was all or nothing out there. 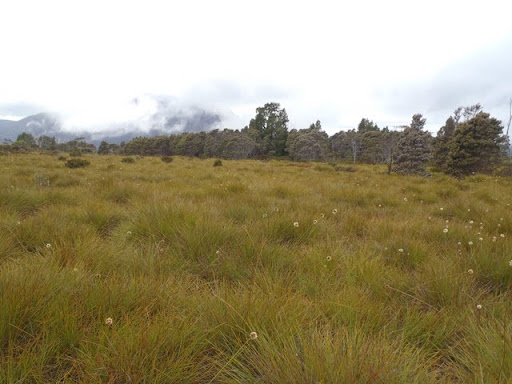 Rach’s ankle had steadily been getting worse so we took lots of breaks today. After the first two days being pretty good track with lots of boarding in the wet areas we were starting to get into the less maintained areas and there was a fair bit of jumping around to keep our feet dry. We managed to avoid landing on the local wildlife at least 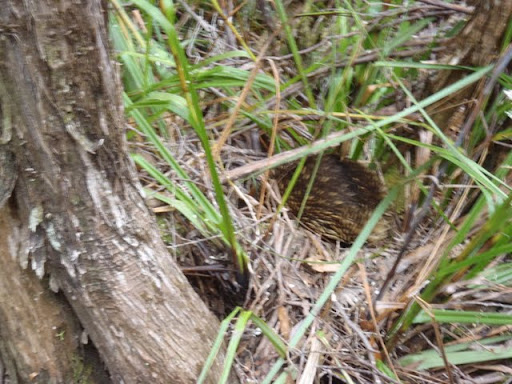 We stopped for lunch at Frog Flats and we were starting to get into the swing of relaxing walking and managed to boil the billy and have a cuppa for lunch. The next five groups had a similar idea so the mossies really got a smorgasbord of walkers to choose from.

I was actually enjoying going at a slow pace by now and really relaxing into the holiday. Rach was less enamoured by the rain forest, and in particular the roots of said forest laying all over the track so it was her turn to be looking forward to the end of the day.

We got a room to ourselves in the luxurious Pelion hut and I got my first good nights sleep of the walk, I was still catching up from the redeye flight I think. The view from the veranda wasn’t bad either 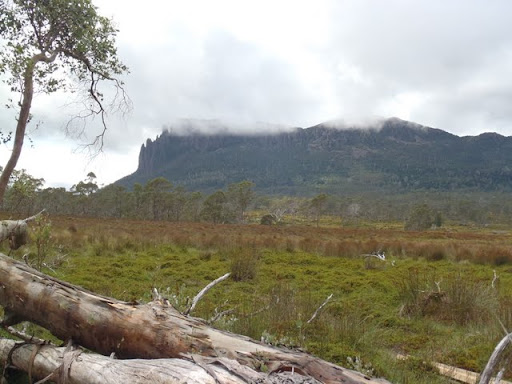 It was interesting staying in the bigger hut with lots of people to see how they were all set up. There were a coupled of ultra light minimalists but I was more impressed with the group of 7 young blokes who pulled out tins of tomatoes and chick peas for dinner, and the two young chicks who were both carrying packs bigger and heavier than mine. I figured it meant that Rach couldn’t complain about her featherweight pack. But she still did.

Barn Bluff side trip then Waterfall Valley to Windemere

Another lovely day so we left our packs at Waterfall Valley then backtracked up to the high plain and then across to Barn Bluff, this was a less travelled side trip and the markers were just small cairns. Which was interesting up the scree slope trying to spot the small piles of rocks….. amongst the really big pile of rocks.
The view from the top was certainly worth it though. 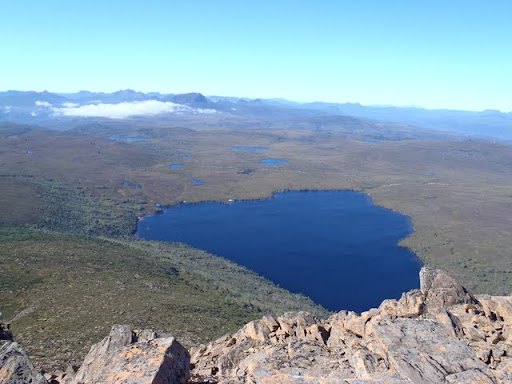 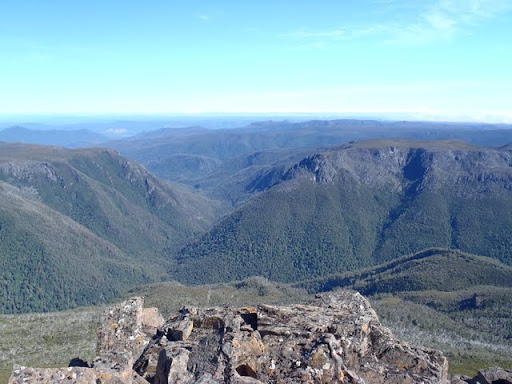 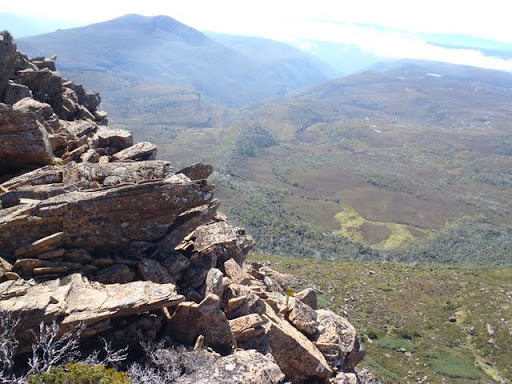 The actual distance between huts wasn’t much but after towards the end I was pretty much over walking and getting pretty grumpy with the whole thing. We skipped the side trip into Lake Will which was a shame but I was happy to see the hut and get to pitch our tent in a quiet corner. I was pretty keen for a beer though. The dinner special was finished off by a dehyd apple pie. It was either remarkably good or my expectations had already been lowered by the two days walking.

We went to sleep with beautiful views from our tent 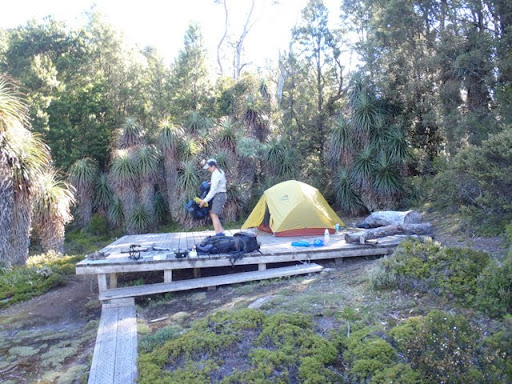 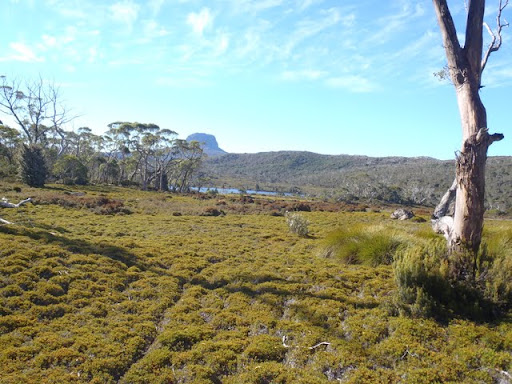 But woke up to just a bit of cloud 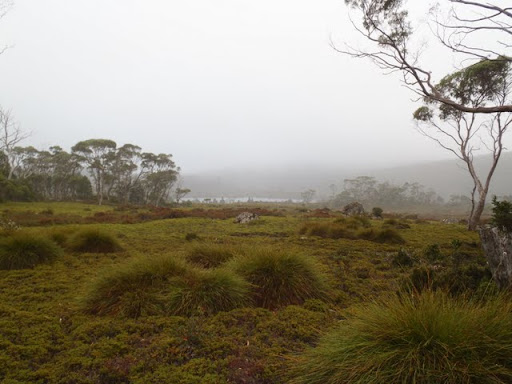