Running fail. Took a hard fall in Kelso - exact same spot where I fell about 3 weeks ago. That hurt. Glad I had packed a jacket, as it was a long hobble home.
C • Oh NO!! 3

Hilton/Halton run with DD11, Julie P, Simpy, Maggie, Goose and Scout. Scout wasn't loving the fact that she was on leash while the other dogs ran free, but I think we'll get there soon. Great conditions and company.

Mix of road and Kelso trail

After-dark romp through Halton Forest - can't wait to bring the pups out here when they're ready.

Rattlesnake loop with DD11. Passed by today's MEC race runners - good turnout! Conditions are going to get ugly this week, so best to enjoy it while we can!

Yesterday's run repeated. I'm pretty sure Scout has now figured out that she's the coach - she likes to throw down the wind sprints when she thinks I'm slacking off. I already love this dog...

Today's bigger news however was that Contour was finally released from the hospital! This little guy caught a nasty GI bug on his way down from Northern Quebec, and has been under emergency care for the past three days. Tough little scrapper - he was found emaciated and freezing by a kindly teacher who took him in until he could be picked up for rescue, but clearly hasn't had time to build up any immunity. Still day-by-day for now, but it's so good to see him eating and wagging his tail again. 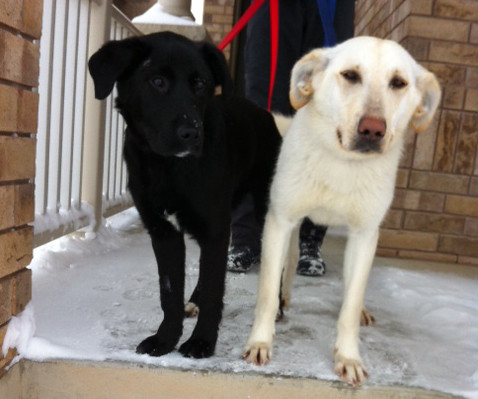 Browner and I are so thankful to the IFAW Northern Dogs Project and Jan Hannah for all her help over the past week - can't say enough good things about this program. Huge thanks as well to Bash and Bent for referring/recommending us to them, and for all the advice and encouragement along the way!

Introductory run with Scout at Rattlesnake. Not off-leash yet given that we're still getting to know her, haven't yet seen her reaction to squirrels, and know that she's in heat (spaying appointment still to come), but she's incredibly good with a leash so it may as well have not been on her. She is a thousand times the runner I am - there may have been some redlining on my part when she got on the scent of an animal track. This is going to be good! Just hope she doesn't get too bored - I swear I saw her yawning as we crested a fat hill at full sprint... 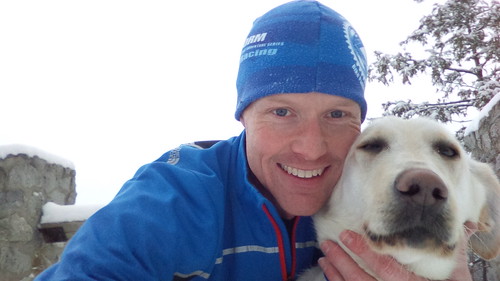 Another solid Bruce Trail long run with Bent, this time point-to-point from south of Devil's Glen to the edge of Pretty River (big thanks to Browner and Bash for dropping us off). This one was a mix of highlights pieced together by some road and farm field slogs through punchy soft-crust snow. Then we finally hit solid ground through the Nottawasaga Lookout and Bent dropped the hammer. Good fun, but a little alarming that we both had shed 5 pounds by the end (Bent had brought a scale to do some experimenting). Quickly made it up over lunch though!

Had to run an errand in Pickering, so I planned a quick run on the Seaton Trail. Haven't been here since I ran the race many years ago, and forgot how enjoyable it is. Rolling hills, scenic river views, soft ground - good stuff. Few icy patches, but otherwise decent conditions.

Came around a bend into an open field to be greeted by a coyote only 200 feet away. I had never seen one before last Fall, but have since four since then (including one from our window). A little unnerving that he would start to follow each time I trotted away, but nice to see.