As I was finishing up skiing yesterday, I met an acquaintance in the parking lot. There was a little snow in the air and the wind was blowing good, but it wasn't bad--at least not after you've been through winter and are a little hardened to it. We were both wondering where the storm was that was supposed to be drabbing the area. Then I went running for an hour or so before heading home. Ski conditions had been really good and the running was good, too, and yet the place had been all but deserted all afternoon, with little traffic on the interstate as well.

Once it got dark though, and maybe at around 7 pm, the storm blew in and it blew in good and raged all night. No way to know how much it has snowed so far (because of the wind moving things around), but it already qualifies as fairly epic in terms of the wind and snow drifts. Things are taking a break in the early afternoon, but from the looks of the weather radar we are far from done--all depending on how quickly the low pressure center moves off, or doesn't.

I can only imagine what it might look like up top, and there is bound to be a whole new crop of fallen pine trees.
C • Snow 9

Skied and ran. An oncoming storm's expected arrival time keeps getting pushed back and not only did it not arrive today, it wasn't even windy. It is probably feeling unloved and wanted. It wouldn't surprise me if it doesn't change its mind at this rate and goes off to find a new suitor--possibly Oklahoma or even Alabama.

We are supposed to get major honkin' mojo filter type snow over the next few days, but as for today, we just had some light flurries. Nevertheless, I was inspired to re-install my skis in my truck and head up to Happy Jack, which I did. 2+ hrs of skiing with pretty decent conditions, and then ran a little afterwards. Unfortunately, this was not quite enough to push Wyoming over San Diego State, but I did what I could.

Headed up to go running at Happy Jack in the afternoon, only to see lots of flashing lights up ahead once I was off the on-ramp and on the interstate. It was sunny, the roads were dry, wind wasn't bad, but still flashing lights are flashing lights and almost invariably don't represent good news. As I got closer, I could see the gate was down across eastbound lanes, and there was nothing to do but but take the little crossover at the gate like everyone else, and come back home. It was a bad crash, no doubt, and later lights came on at the hospital for the Flight for Life helicopter.

I ended up running in the Schoolyard, which was fine; I had thought it was going to be both chillier and windier than it actually was.

Looking back, it looks like both on Sunday and yesterday we set new record highs, at 57F and 59F, respectively. Yesterday was surprising because it was overcast just about all day. But then both the old records were soft, and with many dates showing record highs in the low 60s around this time of year.

With snow on the way, it looked like it was now or (almost) never to get out for the season O' run debut. Not that there's anything wrong with running in the snow. But even at Remarkable Flats there was plenty of snow to run through if one chose, and my choice was to run in snow only about 3% of the time, and stick to bare ground and granite for the rest.

I drew up a course of 9.6 kms and 30 controls, which I figured I could manage in about 4 hours or so, given that I was feeling energetic. Plus there was no sun, so I would need to be energetic to stay warm.

It actually only ended taking a little over 90 minutes, and that was with warmup and cooldown. Even on a slow day Remarkable Flats runs fast.

The orienteering was fun, and I did see a moose (thought I saw a stray far ant, too, which developed to be only a bit of debris on the ground), but the real highlight was finding an absolutely massive mule deer shed! How shed hunters missed this one I will never know, because it was right out in the middle of a wide expanse of prairie. It was so good that at first I almost wondered if it could be some sort of fake decoy, but it wasn't, as you will see.

First, to prep you and give you some context of the utter size of the monster shed, here is a picture of a perfectly ordinarily sized hand: 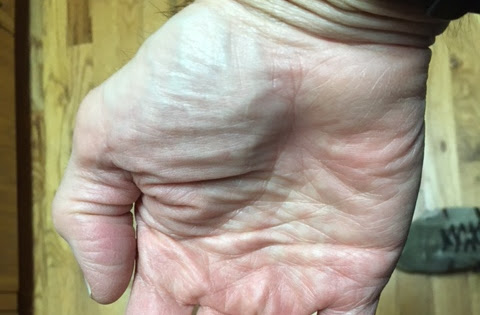 Actually that's not just any old ordinary hand. It's my hand. But never mind that. Just take a look at this: 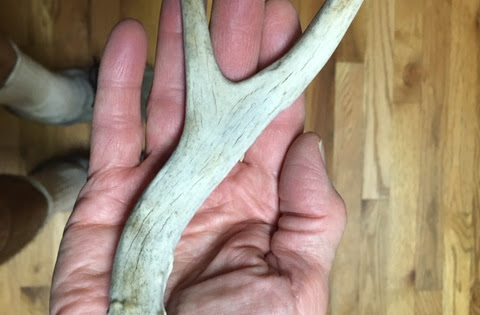 According to sizing reference manuals, the deer that shed this had to be the size of at least a largish dachshund.

It will be a long time before anyone finds a shed anywhere in the Laramie Range that beats this.

Passed on skiing, and ran longer instead, all on snow trails (except for where it was dirt/mud).