Mix of O' and biking. Ran the O' at a good pace with some fine breeze pushing and pulling.

Ran trails late, and well past dark. It was already right dark by quarter after four, because of thick clouds off to the west, blocking the setting sun. The winds were dialed up, and there were some fresh fallen trees across the trails I was on. Didn't see a soul.

Ran intervals, and then presto changoed into biking clothes and hit the roads with a friend.

I was going through my files and came across this photo from the 2001 US Relay Championships at Vasquez Rocks, featuring the winning RMOC team in their world famous "Killer Bee" uniforms--widely acknowledged to be among the best 2 or 3 club uniform designs ever. Okay, actually the clear best ever, even if that is a little immodest, but what the hell. 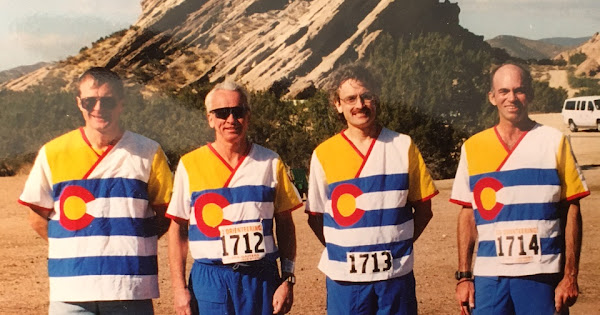 Some of the figures here are instantly recognizable, while others are less so. Almost everyone, for instance, will recognize Neal Barlow at far left, perhaps best known these days for owning more dog kennels than Elon Musk.

Many people will be able to guess that is me at far right, if for no other reason that there is almost no chance anyone would be looking at this log unless they knew me in the first place. One of the reasons I like this photo so much is that it is proof that at one time I had a lot of hair.

Absolutely everyone will recognize birthday boy (Happy birthday, J-J!), who is one of the few people to have told me more than 347 times that his only ambition in life was to play with the Grateful Dead, but that Jerry (that would be Jerry Garcia, I guess? I never knew for sure) had the audacity to go and die on him. Well, since then J-J has moved on in so many ways, and there are at least a few people who hope that one day he might move on back west--although none of them are holding their breath.

But how about the mysterious figure to the right of Neal, with the shades and tucked in shirt? That is, or was, Orlyn Skrien, a relentless relay runner, who never, ever gave up, and once he had an opposing runner in his sight, it was game over. Almost nobody but us other guys in that photo will remember, or ever knew, but right after that photo was taken, Orlyn wandered over to take a look at a lemon yellow VW Beetle that was parked nearby. And even though we couldn't quite say what it was about it, it turned out the three of us all had the same premonition there was something odd and not quite right about it. J-J even yelled at Orlyn: "Don't get in it Orlyn, something bad will happen!" But Orlyn got in, sitting behind the wheel, and then he closed the door. An instant later, the Beetle lifted off the ground, and then shot straight up into the sky, vanishing from sight. It hadn't been a VW Beetle at all, but rather an unmanned Mini Vulcan Transporter Vehicle in disguise. And that's the last anyone has ever heard of Orlyn. Of course the lesson from this is clear: never get into a lemon yellow VW Beetle until after you've won the race.

Almost as mysterious as the mysterious Orlyn is the mysterious disappearance of the US Relay Championships. Back in 2001 it was still a real relay, as the photo shows, with 4 runners to a team like any real relay championship has. But by then the relay championship had already been critically weakened with the first splitting of a single category into two, only to be followed later by additional categories and multiple different course variations, and thus mortally wounded, it was only a matter of time before it was dispatched by people who did not care at an OUSA BOD meeting that nobody cared about. R.I.P.
C • Fortunately... 9

Ran trails late in the day; ran into Bill and Jill, and 3 nordic college guys running as well.

Tisdags Traning--intervals on the hill trail, mainly to avoid the wind exposure on the main dirt road I have been using this year. Day 7 of lots of wind, and--I think--the strongest winds in the string. Fitting, because things are supposed to be, well, not calm tomorrow, but much less windy.

More wind, and some more easy running on trails out of the wind.

Before running, did some biking around town running some errands, and made stops along the way to see Dave, Bern, and Mark.

Good thing about this current stretch of wind is that two more wind farms are getting close to getting through the last of permitting and approval, and the investees must be looking at this wind and licking their chops.