This past week at work took it out of me. Between Mary Louise Kelly and Michelle Kellerman and a big meeting that I was responsible for, I was just happy to have achieved the small amount of exercise I did. So it felt great today to sleep in a bit and get out for a run.
C • Good for you! There's a big... 5

Well, that was a disaster. Out of the 11 controls, I did 2 4 of them cleanly. And for the first half of the course, my legs had zero zip. I'm not sure what was going on today, but it was not good.

The only good thing was that I wore a new pair of Inov8 shoes that I was convinced was going to chew up my feet. I was completely prepared to DNF due to bloody stumps. But that didn't happen at all. The shoes were just fine with no rubbing. Silver lining.

#1: I could not get my head around the trails and which one to be on. After much hemming and hawing, I finally decided, but was walking the whole way.

#2: My eye fixated on the old trail without even seeing that the new trail passed just as closely to the control. I eventually ended up on the new trail anyway.

#3: Started heading out 180˚ off. Got that straightened out pretty quickly, but still couldn't figure out the trails, so went straight west to the big trail instead of NW towards the control.

#4: Ok, I did this one fine. So maybe 3 of 11 controls were good. Just up the big trail to the power line and then in from there.

#6: Headed due south up the hill and then due east to the trail, instead of just going SE. I thought the woods near the control would be much junkier than they were. I probably didn't have to go quite so around.

#7: Almost started heading down the wrong spur out of 6, but caught myself in time

#8: This was good. Down the steep slope to the stream, up the reentrant and spur to the trail, and then down the ride to the control.

#9: Right back out the same ride to the trail, down the trail to where I cut in for #2, and then over to #9. I had seen this control when I was getting #2, so I knew where I was going.

#10: This began horribly, but ended well. Went straight out to the big trail and followed all of the curves in it when it would have been much faster just to head SE east around the top of the gully to the trail. But then I just cut straight down to the stream and up the other side instead of trying to fool with the trails.

#11: The most disastrous! Instead of just dropping back down and taking the big trail to the control, I went up and over the spur to the other stream. Then I picked a gully/reentrant to go up, not really sure which one it was. Made it to a small trail, and started going the wrong way. Figured out that mistake and turned and got to the control. So stupid! 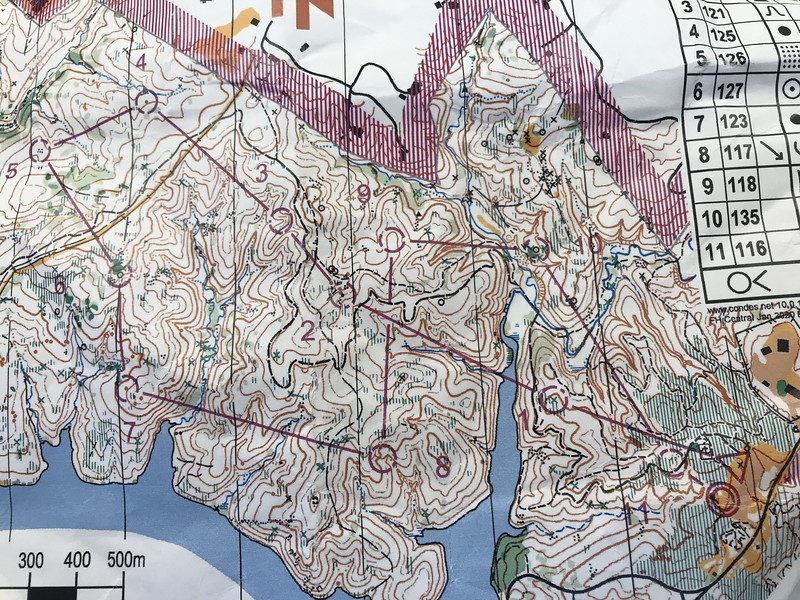