Training for an important AR discipline, as captured by Michelle Green yesterday: 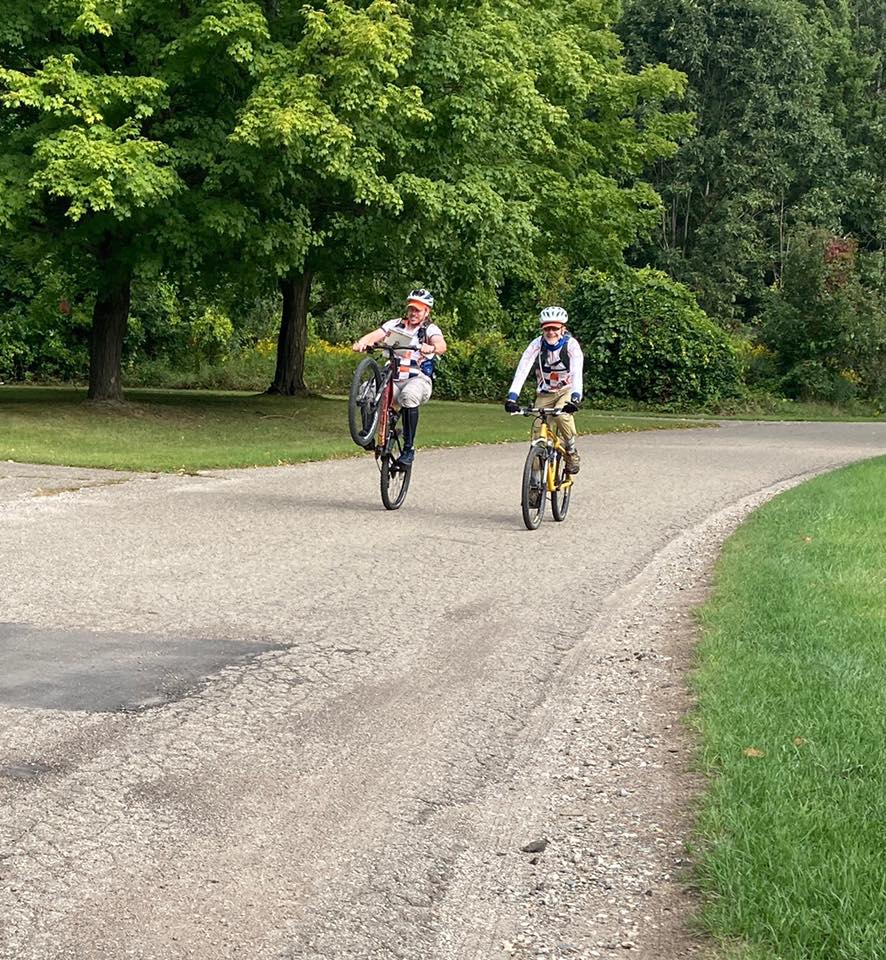 Super fun Get Your Bearings GYB 2020

Three flags, any order. Ken and I shuffled around, and were not among the leaders to any flag we went to.

Ken was rolling a classic 26" bike from who knows when. It rolled well, plus he has like 3000 miles already this year so the motor was well-tuned. I failed to get a good wheelie for Michelle - just can't pick them up at speed. The single track went well, I think for future races I will switch to writing the numbers on the board and then transfer them to the passport later, for more speed.

Ken had trouble in the single track where grip was bad, having done more of a cx/gravel tire that rolled well. But he got through it alright, bumping only one tree. We think the snapping noise was a branch.

I got an absolutely terrible wheelie for Barbara, who said something like "third place", which didn't make any sense because we didn't leave the start in 3rd, and had not passed all that many teams - a few that tried Appleton instead of waiting for Murray, a couple at #5 when they stopped to write, and shook off Hafke Legal at some point. Still seemed like based on starting pace, that would not be right. Guess we will find out at TA1!

I pulled up a monster of a wheelie - great wheel height, poor surface, good distance, just quality stuff. Naturally, there were no active cameras.

Ken had the good idea to keep our feet dry for the big trek, so we did that first, keeping the points sequential.

We were in third place! Then briefly in second place, until some young guys bolted by. They were taking the faster but harder trail based line to #8, while I took the easy follow reentrant. We never saw them again.

It turns out Ken has a monster woods hike pace, so I had to be wary of being pulled around by him when he got ahead. I drifted a bit to #9, but being on "huge hill", it was easy to tidy up. Balance went smoothly.

This trek took about 80 minutes. We didn't run very much, but were tidy on conservative lines. We may not clear the course!

We heard the Pasty Mashers blazed a 38 minute split. Didn't figure that was an option. We had a nice advantage of mostly having boats going into or coming out of all critical areas, like the cut throughs and spots near points, so navigation was easy.

What do you know, sub 40, excluding the transitions. Not bad for having not paddled together. About 3 minutes to get into the boat, a few to get out.

Steve still thought we could clear, and encouraged us. Why not, let us go for it.

Shuffle back to TA2, not running much, but eating and removing hats for cooler biking heads.

Ripped Appleton, it was thankfully super flat. We have a chance! Ripped back to the start/finish. About 22 minutes for this leg.

We got the final map, and hoped it would be small. 1:7500...good good. We had about 45 minutes, and 8 points, so five minutes per point and five minutes back to the finish.

We elected to go sequentially, as that seemed to set up easy attacks, and leave a dense trail network to get back if we needed to drop.

Minor hiccup on 22...another team was also looking, but there were only two pine trees so we got past both, located it, and bolted. 23 was good, follow disc golf until nearly end, go out spur. 24...cross the flats, grab the ridge. Boom. 25 I elected to use a trail based attack rather than pro line. 26...uh oh. We are burning time, about a minute slower per flag than ideal. I don't know that we have time to go back down the hill on the trail, around, and then back up. Pro line? Pro line!

Unfortunately I lost count of which up and down was which. Had I drifted? Oh gosh I hope not. Worst case, we hit the trail, should be an easy correction. Will Ken forgive me? Will this end our clear? Phew, this looks a lot like the 26 hole...it is! Book it. Off to 27...I think there's enough time, if not, we'll skip 29. 27 goes alright. Minor veer on exit, still time I think. 28 is easy - trail junction on hill top. Ken, if you have any shuffle, let's shuffle!

Maybe ten minutes, one flag, and one wall of green between the finish. I think we can, I think we can. Flag goes easily, but there's the wall of green. Ken has been finding easy ways all day, so we use his dry creek, but it greens out a bit...there's still a way. We manage to pop out onto the road without any brutal bashing, phew phew!

Bring it in, four minutes to spare, 20 odd minutes behind the Pasty Mashers, woo woo, last team . About 39 minutes for final o section.

Ken was good to race with, wish the poor guy had a map, I think he would have enjoyed it more. I did warn him I would hog it! Ken has an unusually fast woods hike pace, especially for someone who's not a huge fan of running, which I could really appreciate.

Nice to see everyone!

Didn't quite get out the door early enough to try the planned morning loop, so did a shortened version with a little bit of new to me single track and old to me gravel.

Per one online bike wattage estimator that requires, assuming 230 lbs + 30 lbs of bike, riding on the hoods on gravel, approximately:

105 watts, pretending it's flat and has no sand

which gives a one hour flat asphalt slick tire pace needed of between 18.8 and 20.3 mph.

So some ground to gain before readiness, since with the odd lights and a few small hills, I'm starting at about 16 mph for an hour (120 watts), which would only be between 10-11 mph, way outside of the sunset box, and flirting with the entire cut off of 21 hours.

What about if you stopped being fat, Jens? Dropping 50 pounds takes the 105 watts to about 92 watts, again assuming it's flat. So yes, 10% for free, so not to be dismissed. (Plus the associated hiking hill climbing benefits, etc.)
2 PM

Easy intervals: On some of the light-to-light sections, try to keep it towards 160 (or at least above 150), otherwise not too much above 140.

Barbara approved routing. Not as easy as it needs to be, but at least a step in that direction.
C • Well... 1