Run with Lillian at Little Mountain and Hillcrest neighborhoods. She was on the bike, and I was running... so a little hard to keep up.

Need to get out running way more than I am right now.

Spent (literally) all day working on a new map in Kamloops around the hospital, a bunch of government buildings, a park around a creek, and a steep hillside park. Some pretty cool shaped buildings, looks like decent sprint terrain, probably the third best that Kamloops has after TRU and Valleyview Bike Park.

Mapping in Mount MacPherson. The area I was in is actually way more open and interesting than I thought it was going to be based on the Kartapaullatin. Nice open forest for a most of it (except a really thick, buggy marsh), and a decent sized area of complex contour detail that I'm struggled with a bit, still more of that the next time I come out.

Didn't really get outside today... just sat behind the computer and mapped. Finished off the Downtown Revelstoke Expansion (now out to the highway for almost 2km squared mapped, or larger than the size of the Canoe Creek map!), and finished Riverside Park in Kamloops with the fieldwork I did yesterday. Also started on a new map in Kamloops around the Hospitial and park on the hill behind it. It will be a climb intensive map, but has a bunch of interesting buildings, fences and walls on it. Will be good for their evening events.

Also looking at squeezing in a small lSSOM forest map in Salmon Arm on the north side of Mount Ida behind the Geirre's Fruit and Cherry farm. The hillside is crown land (with decent parking along a road) and nice open forest with a moderate trail network. There are a number of interesting re-entrants, the only problem is that the hillside is quite steep, but we need another map close to town in Salmon Arm. We are having to re-use maps that we used in the spring, and seem to be kind of running our maps into the ground with over-use. The problem is that there aren't many good (or even halfway decend) places left to map in Salmon Arm. There is the Haney Heritage house, which would be a small map, but I think permissions would be a nightmare every time we used it if we managed to event get it once.

I was pretty sure I got this week's map without any clues, and the clues just seem to be confirming what I initially thought! We'll see if I turn out to be right.

http://weeklymap.org/052.html
Highlight below here to see my answer (it took a lot of playing around with html for me to figure this out... I need to take some computer programming course sometime):
Nuclear Explosion Locations.
8 AM

Mapping Riverside Park in Kamloops, no smoke today! The map is actually slightly more interesting than I thought.
1 PM

Mapping around the Mount Dufferin, finishing up the map update. I got through a couple of small hillsides from unofficial park entrances, then got to an official park entrance to see the big signs saying the parks are closed due to fire risk. So that cut that idea rather short. I guess that map will not be finished this fall.

Fielwork for expanding the downtown Revelstoke map out to the highway. Not as smokey in Revelstoke as Salmon Arm. Feeling pretty tired for some unknown reason.

Forgot my Garmin, not an issue for mapping, but I don't know how far I went today.

Corridor down in Haines Creek with Rachel. She went clockwise, I went counter-clockwise.

First corridor I have ever done.

EDIT: apparently my maps aren't showing up for anyone besides me, so I'm testing things now...

A short course in Haines Creek with Rachel. We alternated controls, walked most of the uphills, and took the trails off the map. We also found a few things to change on the map... I'll also be updating the map to ISOM2017 sometime this fall.

So I started at the bottom of the silvermine trail (Ignore the line from home... I didn't use my Garmin I was testing using the bluetooth GPS with my phone and a new app), and was planning on GPSing all the trails along the bottom chunk of the mountain, and look at the forest to see if it was worth mapping for a weeknight event.

So the plan was to take the lowest trail on the way out, and then weave my way back filling in all the other trails. Interestingly, I found a trail I had never been on before, so I took it. It traversed (with a slow climb in general) towards the west along Mount Ida, but slowly petered out. So, rather than just turn around, I decided to bushwhack up the mountain until I hit the cutracross road. Turns out, in most places the forest is very nice, but there were a few sections of superthick deadfall.

Hit the road a little west of where I was expecting, never really knew where I was. Ran back along the road, and then down the second east-most silvermine dirt biking trail.

It is so awesome to be able to go running somewhere completely different all the time.

Out in eagle Bay. Might be my imagination, but I think the smoke cleared slightly today. 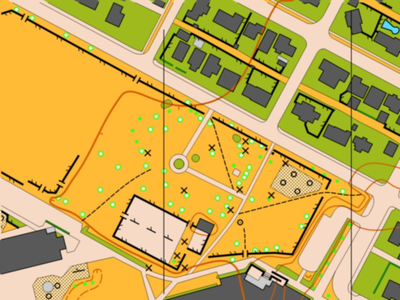 Bakker know has been a pain lately.
1 PM