Lake Needwood Regional Park, MD. Starting at Needwood Rd., up Upper Rock Creek Trail (a dirt trail going up towards the Agricultural History Farm Park) to Muncaster Rd. (not Muncaster Mill Rd., which I crossed), and back. I didn't feel that strong but not too bad either. I did this after dropping Max of at a gym to workout with a friend and after getting my auto emissions test. The trail doesn't climb a lot overall but it does undulate many short ups and downs over the more gradual grades. I felt most of them. Though I'd gotten more sleep, my sleep was interrupted in the middle. Though it wasn't what awoke me, my knee hurt more in bed than it did on this run (which was none). It was sunny and in the upper 40s or lower 50s F. I ran in shorts and a t-shirt. I think I only saw about 4 of 5 people over the route. 3 were runner going down when I was going up. In contrast, as I stretched after finishing, I saw a steady stream of people taking the route around the lake and enjoying the good day.
2 PM

Hoyles Mill Conservation Park. I started from the Hoyles Mill Trailhead parking lot on White Ground Rd. Today was better than last time in that I was able to make better sense of the vegetation and match-up point features on the base map. Building on, and updating the vegetation mapping from my last outing, I found ways through the green areas of the north, to nicer stuff more typical of what I'd seen further south. Unfortunately somehow my GPS setup had gotten reset, perhaps due to an update. It changed track recording to Auto mode--That's much less detail than recording every second of a track. It gives results with less detail than my watch GPS shows. There were nice scattered and prominent rocky features in corridors of open forest. Where there was medium green vegetation, I found places that poked holes through it and which could be mapped as light green. I spent a little while in a big high field where it looks like natural hay grows. I got a bit of an viewpoint across the forest and to the suburbs. 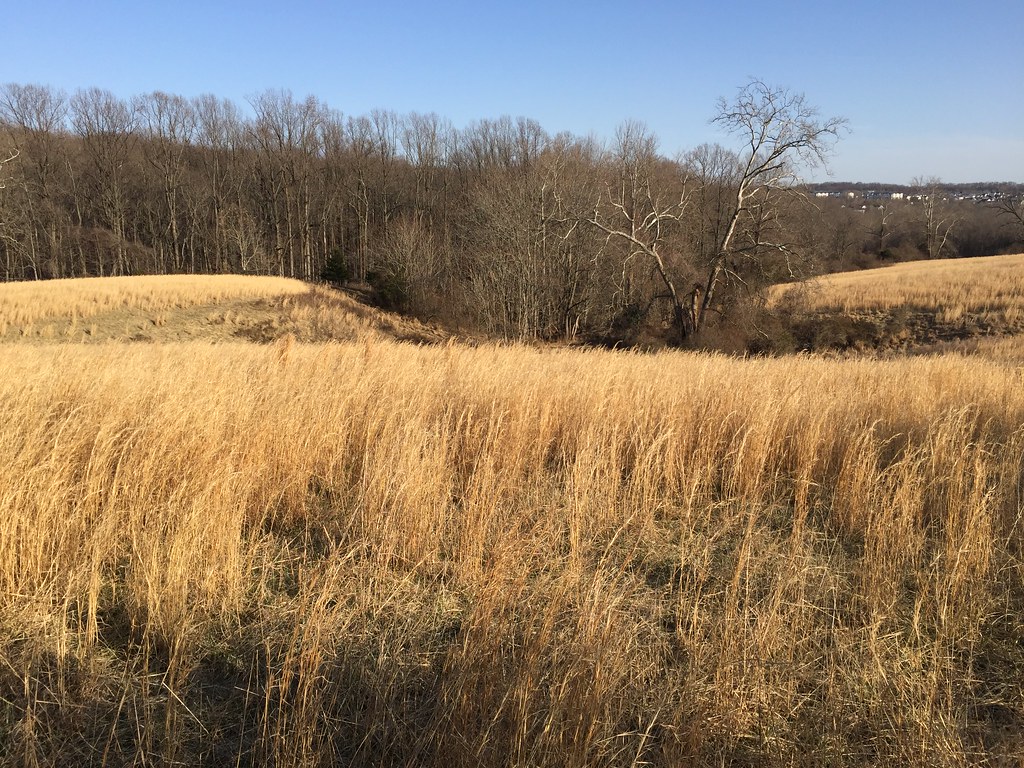