I had planned to go out to Lynn to vet, but I ended up waking up late, and I had some work to do in my office. I would like to get more running in, but I want to resist the temptation to ramp up my training rapidly as I find some physical success. While I have only run 38 km this month, 100 km is a very reasonable goal for the month. I need to sustain this level of effort without breaking, and my target is still 7 months away.

The Red course at Great Brook Farm, set by Tim Parson. Since SGB, Brendan, and I had volunteered to pick up controls, we arrived at about 11:30. Ali, Magnus, and PG had already finished their races, so I knew what time I had to beat. I set out with a race mentality - trying to pace myself early on, and push hard in the latter half of the course. I won the race, and this is my first local meet victory (helped by Ross's departure). The first nine controls had some challenging legs, 10-13 had lots of trail running, and the last seven were again technical. It was a good mix of legs and a challenging course given the terrain. GBF has a dense trail network and some sapling-rich woods that make it challenging for course setting.

Tim had provided an inset with the area bounded by controls 5, 15, and 6 at 1:4000 to supplement the 1:7.5. That area was tricky, and I made a 45-sec mistake at 4 stopping too short at the wrong boulder. I found I had the most success when I focused on the contours and not the rock features and trails.

I ran aggressively, but I am still slower than I would like to be. Consider that 10-11 was a trail leg except for the last fifty meters, and I ran a 5:40 pace. I suspect Ross or Jordan would have run 4:00/km. Nevertheless, apart from the error at 4 and small hesitations, I had a clean race. AP doesn't think I made any mistakes relative to the field (maybe everyone struggled at 4). However, I only won two splits; I lost eight minutes to superman, and was 16% back on average. I'm thrilled to have won (beating Ali and my British alterego, IanF is especially sweet), but it was something of a fluke. The race was a tossup among the top 5 or 6 runners, and I had the cleanest race. Even still, my orienteering wasn't that great. Brendan is injured, and Ali lost a contact. I hope to claim victory when they have good races, too.

Alee Perkins, the daughter of Tim Parson's college roommate, joined us for her first orienteering experience. She graduated from Harvard in 2010 and works at a solar panel company. She ran white and yellow well, joined us for dinner, and seems interested in joining our merry band. I also met Sarah Bjorkman, Magnus' other half; she seemed like good fun and should join us for CSU activities.

Thanks to Tim Parson and all the NEOC volunteers for making this a great event.

Ali, Brendan and I picked up the controls in the sectors that Bill Pullman and Stephen hadn't visited. I accidentally pressed "stop" instead of "lap" when I got to the second control, hence the truncated track.

After we returned, it was discovered that there were two controls still out in the woods from white and yellow, so I ran hard to get them. Ali had to get on a plane at 11 PM, so haste was critical. Our posse returned to Cambridge, showered at our respective apartments, and gathered for Indian food at Chez Granger-Bevan.

I had already taken a rest day this week (Tuesday), so I decided to go out for an easy run. I seem to have tweaked a muscle on the outside of my right knee/thigh - possibly from not stretching Thursday night, so I was careful. However, once I started running, my leg seemed to loosen up. It didn't bother me at all. There were some aberrations in the tracking of my position; the speed and location data for the GPS track don't make sense. I kept my pace slower than 5:00/km for the duration.

I don't Night-O often - almost exclusively Pawtuckaway and the occasional CSU training, but I may compete more often. My headlamp is a cheap Energizer headlamp that I bought at Sears for about $15 five years ago. It's convenient - takes 3 AAA batteries, has long runtime, is small, and I don't especially care if it gets destroyed or damaged. However, it's a bit weak for Night-O. Energizer advertises it as 56 lumens; amazon lists it as 36 lumens.

I feel a bit ridiculous paying $400 when I only Night-O competitive two or three times per year (e.g. for a Petzl Ultra), but I am interested in an upgrade - preferably something that would be capable for a night leg at a major European relay.

I followed the discussion on Sam's thread, but her needs are somewhat more demanding than mine. At present, I'm considering two headlamps by a company that makes some hand flashlights that looked attractive:
Fenix HP11 - ostensibly 277 lumen, 4xAA
Fenix HP20 - ostensibly 230 lumen, battery pack; $100 on amazon

The Fenix HP10 225 lumen (claimed) 3xAA received high reviews on amazon. I will probably buy the Fenix PD31 and TK35 handlamps because I really like flashlights, and these seem to be brighter than comparably priced Surefires.

The Childs Bros (Mario and Luigi?) and feet all seemed to have good lights, so I will probably investigate those, too.
C • You can also 7
6 PM

Cycling to Hammond Pond. I forgot to start my GPS until a few minutes after my departure from work, but I was only interested in obtaining the track to sate my curiosity, rather than accurate logging. I stopped a few times to check my phone, as I don't know the route that well. Cycling up Comm Ave is very difficult. I arrived about five minutes early.

This session is a lesson in how not to Night-O at Hammond Pond, and is brought to you by the letter e and the color 'fail.'

A set of challenges:
Challenge 1: It was cold enough for breath to condense, obscuring lights.
Challenge 2: My headlamp isn't that bright.
Challenge 3: It was drizzling.
Challenge 4: The vegetation is thick in places in Hammond Pond.

These were compounded by two errors:
Error 1: I ran in running shorts, exposing my legs to abuse as I pounded through vegetation (especially the prickly kind).
Error 2: I ran in glasses instead of contacts. This was the root of my problems, because my headlamp's flood illuminated my glasses, bouncing light into my eyes. My breath condensed and fogged my glasses, and the rain further complicated visibility. The net result was that I could barely see what I was doing.

I had so much trouble even seeing trails that I started to take longer, really safe routes - e.g. to 7 and 12. I persevered and struggled through the course, but entirely due to my own lack of preparation, I was barely orienteering. The course was interesting and a good opportunity to get out; I just botched it horribly. Thanks to Alex for taking the time to set a legitimate course (with controls)! Keith, Brendan, and I went out to Texas Roadhouse afterward and talked about stuff.

Evening easy run about the Charles before hanging out with the Jester. My legs felt a bit wobbly at times, but generally good. I still need to stick to this type of intensity and distance until it becomes easy and comfortable. Adjust, body, adjust.

A rough day getting important things done. I decided to eschew training in favor of sleeping and recovery. My body probably needs a little extra down time anyway after the punishment I gave it at P-way.

3k time trial is scheduled for today, but I have nothing to gain by running it. It would be extraordinary if I could break 12 minutes. Once my base fitness is built up and I have started interval training, I will worry about time trials. I am chagrined; races are fun. My PR of 11:13 is shoddy and demands improvement.

Goals are nothing; action is everything.

An aside: my peeps look so happy! 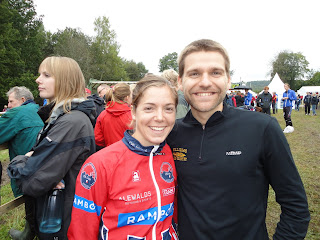 I decided to go out on an evening run after spending a vacation day catching up on some work and miscellaneous tasks. My legs felt good at the start of the run, though I tired near the end. I continued The Rise and Fall of the Third Reich; I'm on Part 4/7.

Virtually any competition I enter will require fitness far greater than what 30 minute runs can offer. I doubt I could run a 5k much faster than 21 or 22 minutes right now. I might start running longer long runs - gradually inch my way up to 1 hour runs, but for the present, my standard run will be about 30 minutes until they are easy at about 5:30/km pace. Today's effort was taxing, and I had to push harder than I initially intended.

I took breaks during the plank because I am a pansy. I found the labor very tiring, but I haven't done much core strength (or strength training of any kind) lately. I plan to integrate more as I gradually ramp up my training.
C • .... or, more likely, 2